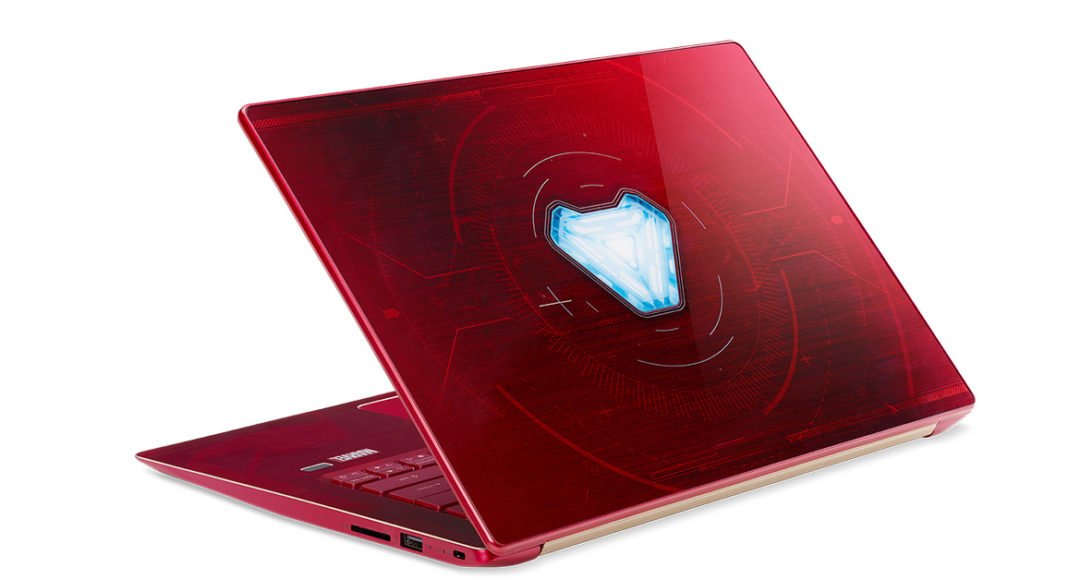 The Avengers Infinity War movie by Marvel is set to release next week. It is supposed to be the biggest block buster from the movie house bringing many of its super heroes on to one screen. Today, Acer has announced introduction of three new special edition Marvel laptops.

The first one is Acer Aspire 6 Captain America Edition, which has a premium aluminium cover featuring captain’s iconic star logo that can be seen on his Shield too in the movies.  The notebook is powered by an 8th Gen Intel Core i5-8250U CPU and NVIDIA GeForce MX150 graphics card. It also comes with 8 GB of DDR4 memory (user-upgradeable to 20GB) and 1 TB of SATA HDD storage. Over that, Acer Aspire 6 Captain America Edition packs a HD camera with HDR while Dolby Audio Premium provides audio drivers. Gigabyte Ethernet is also available. As for the display this one has a 15.6-inch FHD display and run Windows 10. Couple of USB 3.0 and 2.0 ports are also thrown in the mix. One can get the special laptop at Rs 63,999.

Next up is the Acer Nitro 5 Thanos Edition. This is a special edition gaming laptop built for entry level games. This also features a 15.6-inch FHD display. The notebook’s top cover features a Thanos portrait decorated by IMR (In-Mold Roller) finishing technology, this special edition of Nitro 5 is powered by NVIDIA GeForce GTX 1050 graphics card with 4 GB GDDR5 VRAM plus a 7th Gen Intel Core i5-7300HQ CPU. As for the RAM it has 8 GB of DDR4 memory upgradable to 32GB. For fast boot-up time and short game loading, the laptop comes equipped with a 128 gig SSD drive paired with a 1 TB HDD for storage. It is priced at Rs 80,999

Last one is our favourite because we love Iron man and he is the best super hero in the Marvel series right after Logan (Wolverine). It is called the Acer Swift 3 Iron Man Edition. Weighing 1.6 kg, the Acer Swift 3 Iron Man Edition a sturdy aluminium top that has a glowing arc reactor. Under the hood it has the 8th Generation Intel Core i5-8250U processor, Intel UHD on board graphics unit 620 and offers up to the claimed 10 hours of battery life. Acer Swift 3 comes with a 14-inch Full HD IPS anti-glare display, 256 GB SSD, 8 GB of memory and 802.11ac Wi-Fi with USB 3.1 type C and HD webcam support. This one can be picked up for Rs 79,999.

The trio will be available on Amazon starting April 23, 2018.