Dyson has just made its best selling vacuum cleaner better. How? Read the rest of our Dyson V12 Detect Slim Total Clean review below. 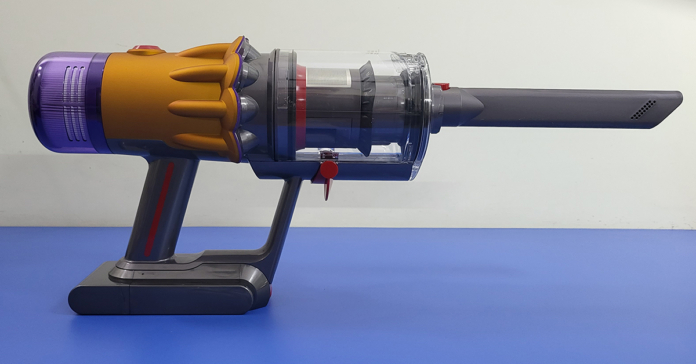 Dyson is a vacuum cleaning brand that originated in the UK and has been doing wonderfully well in India too. It has launched a flurry of products in a lot of segments. These include hairdressing equipment to household vacuum cleaners. After the last year’s V11, the company is out with its upgraded and much better version, which we got to play with. This is Dyson V12 Detect Slim Total Clean review you need to read before you buy.

If you compare the Dyson V12 Detect Slim Total Clean to the previous generation, at first glance you might miss the new upgrades. But when you start using it you will see a sea of change. The form factor is very similar, however, you do get a much better-looking matt finish rear body structure. The trigger button has not been replaced and a power on/off button has been placed on the head.

The Dyson V12 Detect Slim Total Clean also gets an LED screen that tells you the kind of dirt (basically particulate matter) that the vacuum cleaner has sucked in. New attachments have been added to the box including a cylindrical V-type head that can vacuum large hair strands and even ribbons, which the earlier model was unable to do. 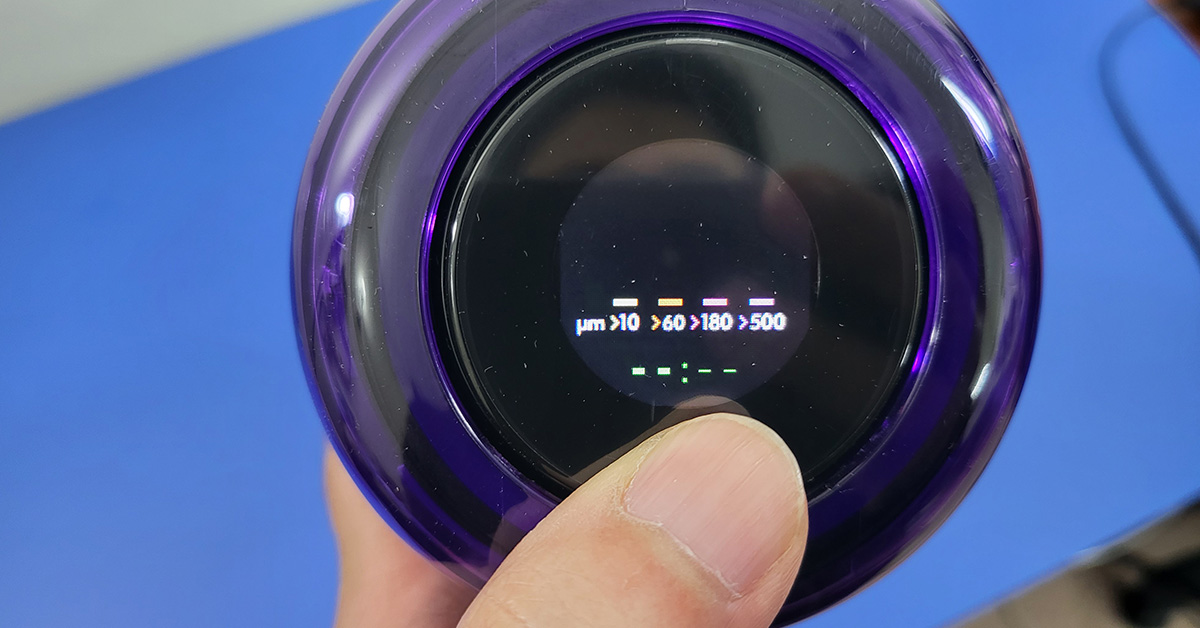 The battery, which is also the base of the handle of the Dyson V12 Detect Slim Total Clean is removable and can be hot-swapped any time. But a second battery is not part of the package, you would need to pay a little extra for it. Attachments of the Dyson V12 Detect Slim Total Clean include a new laser slim fluffy head too, that we will talk more about in the performance section. Other parts include a wall dock for easy docking, a soft brush, crevice tool, direct-drive cleaner for hard surfaces and floors, combi tool and a stubborn dust brush. 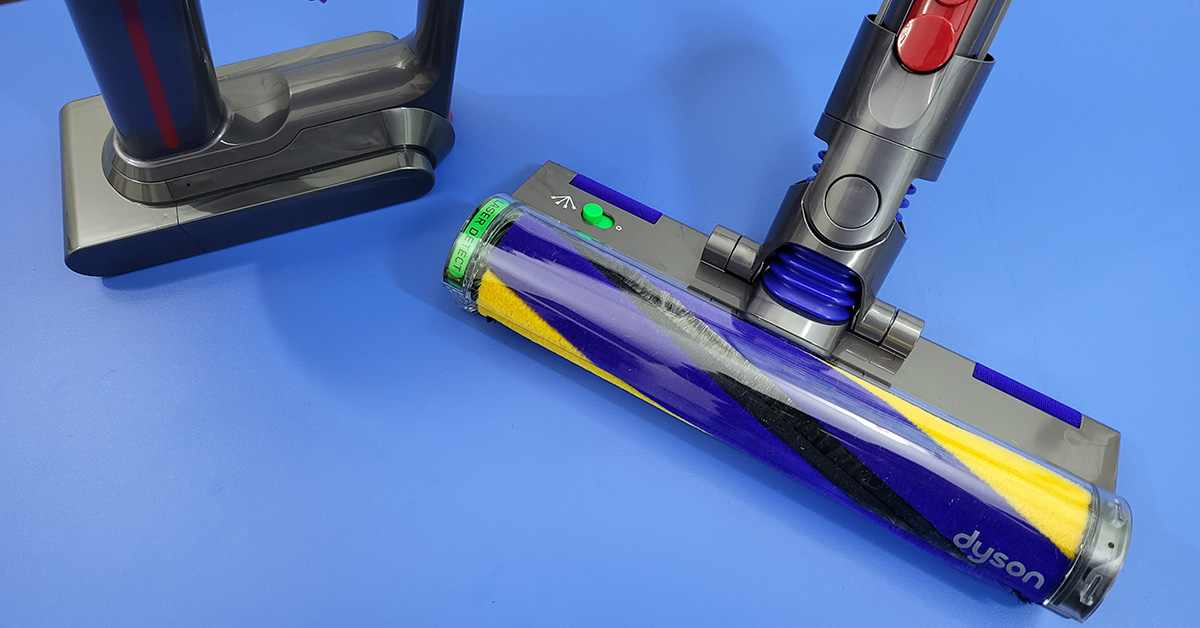 All in all the Dyson V12 Detect Slim Total Clean is a well-built machine that has a clear dust container to hold all the dust and dirt particles. This can hold up 0.35 litres of filth within, after which you can easily remove it and be back to your therapeutic cleaning session.

Now for the fun part. The Dyson V12 Detect Slim Total Clean uses 11 cyclone technology to keep all the sucked dirt and particles within the dust container. The suction power of the VC is 150AW, which is much better than any other vacuum cleaner on the market of this size. The laser slim fluffy cleaner head is 25 CM wide and is the best addition to the new package. What it essentially does is that it shoots a laser beam at an inward 30–35-degree angle so that you can see the smallest of dust particles under the green laser light. The bristle bar in this head can also be removed and washed easily.

The Dyson V12 Detect Slim Total Clean is able to pick up particles as small as 3.5 microns and with the hair screw head picking up dog or human hair is child’s play. Moreover, the LED screen at the back keeps you updated. It will show you features like battery left, maintenance alerts, PM level of filth in the container and also power modes.

Talking about which, there are three power modes in the Dyson V12 Detect Slim Total Clean – Eco, Auto and Boost. Boost is the most powerful and Eco is the slowest. We did most of our cleaning in auto made as then the VC on its own adjusts the power to the kind of dirt and muck it faces.

Moving to its battery life, we got over 40 minutes of battery juice from the Dyson V12 Detect Slim Total Clean. We majorly used the moving heads like the Laser head and Direct Drive cleaner. In case you just use the non-mechanical heads, then the battery life will go higher in some cases even over 60 minutes. But 40 minutes of battery life is also very good to dustproof 3 bedrooms, 1 large living room, kitchen and a large balcony.

In case you have a bigger house then we recommend buying a second battery pack. The charge time of the Dyson V12 Detect Slim Total Clean as stated by the company is 4 hours. Which is about right. During our test, we encountered 4 hours 15 minutes of 0-100% charge time.

So how does the new Dyson V12 Detect Slim Total Clean feel when cleaning. Since the trigger has been removed from this version, we felt that there is less fatigue as you do not need to constantly press something. Also, with the new attachments, it was not very heavy to use. This VC can reach the tightest of corners and under bed areas which the usual robot vacuum cleaners cannot. Also cleaning above the cupboard and crevices in the sofa is very easy.

We loved the addition of the laser tool in the Dyson V12 Detect Slim Total Clean. Yes, it reduced the battery by 5-10 minutes, but you do get to see with your own eyes, how dirty your beloved home can be. At 55,900 Dyson does ask for a good amount. Nevertheless, take this amount as an investment that you have to spend for a healthier, finer living for not just you but the whole family.

Slimmer and lighter than before

An additional battery pack in the price would have been great

- Advertisment -
Dyson is a vacuum cleaning brand that originated in the UK and has been doing wonderfully well in India too. It has launched a flurry of products in a lot of segments. These include hairdressing equipment to household vacuum cleaners. After the last year's...Dyson V12 Detect Slim Total Clean review: Laser focus cleaning