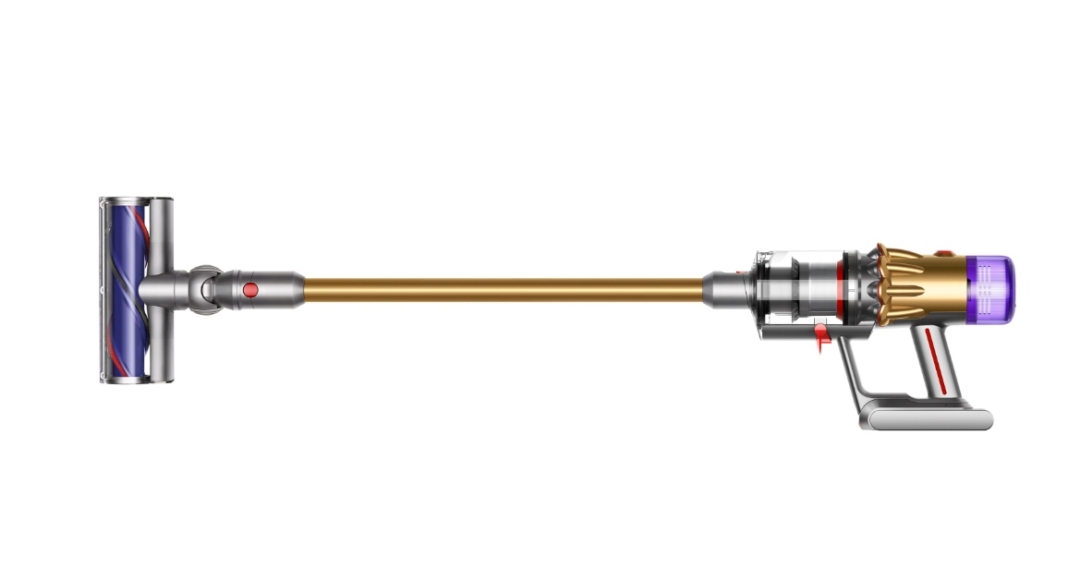 In India, the Dyson V12 Detect Slim vacuum cleaner has been released. The cord-free vacuum cleaner comes with the new technology that is designed to identify buried dust as small as 10 microns suitable for deep cleaning in Indian households. It is incorporated with an acoustic piezo sensor to enable scientific proof of what’s been sucked up. In addition to this, there is an LCD screen that displays important information like battery, modes and dust collection.

Dyson V12 Detect Slim has been launched in India with a price tag of Rs 58,900. But online it is selling for Rs 55,900. The vacuum cleaner is now available for purchase through the company’s official website as well as via Dyson Demo locations around the nation.

Dyson V12 Detect Slim features a Dyson Hyperdymium motor that provides up to 150 air watts of strong suction and 5-stage filtration that collects 99.99 percent of dust particles down to 0.3 microns for a powerful deep clean.

The new Dyson V12 Detect Slim reveals hidden dust by incorporating a diode laser inside the cleaner head that is precisely positioned at a 1.5-degree angle, 7.3mm from the ground to produce the best contrast between dust and floor. The vacuum cleaner can remove the particles and meticulously size and count them 15,000 times per second using an acoustic piezo sensor, which converts vibrations into electrical signals and precisely displays the size and number of particles sucked up on an LCD at the back of the vacuum. 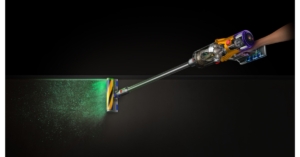 In addition to this, the laser dust technology on the Dyson Vacuum cleaner can verify that your house has been thoroughly cleaned. By incorporating a precisely angled inside the cleaner head, Laser Dust Detection exposes particles that are invisible to the human eye. Dyson V12 Detect Slim uses Dyson’s 5-stage advanced filtration technologies, which capture 99.99 percent of particles as tiny as 0.3 microns8.

It has been included with a green laser diode – selected for its ability to give the highest contrast – inside the Slim Fluffy cleaner head, precisely positioned at a 1.5-degree angle, 7.3mm off the ground. It implies that buried dust on the floor surface may be detected and cleared that would otherwise be undetectable to the human eye. The user can quantify the dust it finds and then shows it on an LCD screen for real-time scientific verification of a deep clean. 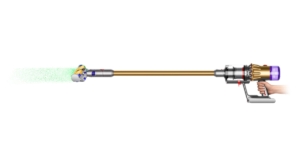 The vacuum has an auditory piezo sensor built-in. Carbon fibre filaments in the cleaner head capture microscopic particles, which are then sized and counted up to 15,000 times per second6. The dust enters the vacuum and strikes the acoustic piezo sensor within the bin intake, converting the small vibrations to electrical impulses. The size and amount of dust are shown on the in-built LCD screen, allowing the user to see how much dust the vacuum has cleaned, as well as the different particle sizes, and provide scientific confirmation of a deep clean.

The Dyson V12 Detect Slim is intended to automatically boost suction strength when it comes into contact with a considerable volume of dust. When the piezo sensor detects large concentrations of dust in auto mode, reactive suction power is initiated to automatically increase in power. Suction power is lowered to its original level when dust levels return to normal. While the anti-tangle conical brush bar that spirals hair off and into the bin prevents hair from wrapping around the brush bar.

Komila Singhhttp://www.gadgetbridge.com
Komila is one of the most spirited tech writers at Gadget Bridge. Always up for a new challenge, she is an expert at dissecting technology and getting to its core. She loves to tinker with new mobile phones, tablets and headphones.
Facebook
Twitter
WhatsApp
Linkedin
ReddIt
Email
Previous articleHow to download mobile apps not available on Google Play
Next articleSamsung Galaxy Watch 4 and Galaxy Watch 4 Classic update announced, will be available in India and globally from tomorrow