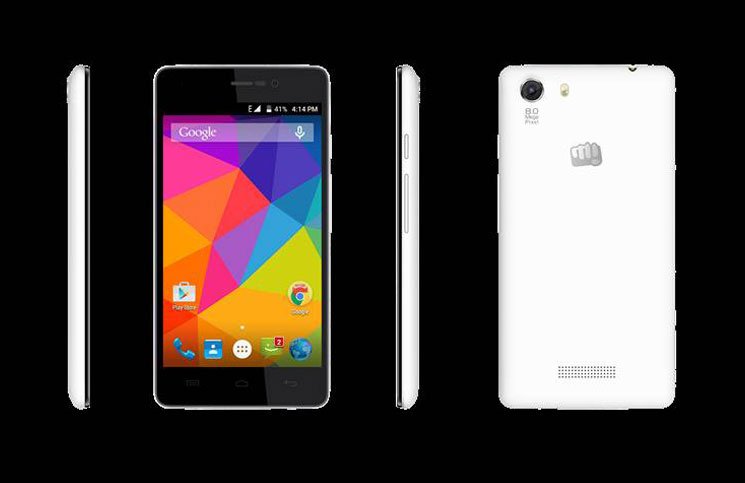 Budget smartphones are usually aimed at the youngsters of the society. Micromax has got yet another budget smartphone in the Indian market that is in the budget segment. Called the Q372 Unite 3, we got to review it recently and this is what we could make of it.

The Micromax Q372 Unite 3 is available in blue and white colours. We received a white unit for review and quite liked its built. The phones white back panel is grippy and one can hold the phone nicely. The white panel has a silver metal trim along the sides that gives this phone the edge.

The Micromax Q372 Unite 3 screen has Corning Gorilla Glass over a 4.7-inch display. This IPS LCD capacitive display comes with 16 million colours. The mobile phone is not that heavy and is very comfortable to use, even with just one hand.

Under the rear removable plastic panel, there is a battery that can be removed, two Micro SIM card slots and a Micro SD card slot. The power button is located on the right side of the phone along with the volume key. The USB port is located at the bottom of the phone and the 3.5mm headset jack is located at the top of the mobile phone. The primary camera is on the top right (rear) of the mobile phone, which comes with the LED flash. A neat pair of headphones also come in the box for music lovers.

The Micromax Q372 Unite 3 has a 1.3GHz Cortex-A7 Quad-Core processor that comes with 1GB of RAM that try to make the applications and services run as smoothly as possible. The users also get 8GB of internal memory to store files. And there is also the option to add up to a 32GB microSD card to store additonal files. All this runs on the Mediatek MT6582M chiptset.

For graphics a Mali-400MP2 is also on board. Other features include accelerometer sensor, proximity sensor and HTML5 for browsing. The primary camera of Micromax Q372 Unite 3 comes with auto focus and can capture 8-megapixel still images along with HD playback and recording. For selfies, there is a 2-megapixel secondary camera. The rear camera captures very decent pictures, but in low light and dark areas, the picture quality was not up to the mark. Macro shots on the other hand were quite good. The front camera could have been better. We were not particularly happy with the selfie shots it was able to produce.

We were able to play most apps and low-end games on the phone without any hassles. But, the mobile phone started to heat up and hung a little when we tried out some graphic hungry games. Also, the game loudspeaker volume could have been better. Talking about which, we faced no problems when it came to audio and call quality on the Micromax Q372 Unite 3. The supplied headphones are really nice. Screen, image and video quality is also above average and we quite liked what we saw.

Moving on to its battery life, the Micromax Q372 Unite 3 has 2,120 mAh interchangeable battery inside it. It worked for 20 hours staright after a full charge (under nominal use).  We tested the phone with Quadrant and it managed to score 4,710, that puts it right in the middle of the pack.

The Micromax Q372 Unite 3 is built for the masses. No matter which Indian language you speak there is menu available for you in your native tongue. It has the Android Lollipop 5.0 OS too. It comes preloaded with Unite Lens, CleanMaster, Apps Center, Snapdeal, SwiftKey, Newshunt, Quikr, and Hotstar apps. We would like to give a special mention to the Mad app that enables the users to earn money for watching videos. The experience was quite smooth throughout. Except for the minor heating issues and the front camera the phone is decent for the buck spent on it. The company has priced the Micromax Q372 Unite 3 for Rs 7,999. People can get the mobile phone for Rs 6,027 at any online retail store.

Sahiba Sethhttp://www.gadgetbridge.com
Sahiba Seth is a student, pursuing English (Hon) from Delhi University. She has been a trainer of HYTSE (Helping Youngsters To Speak English) in her school. She loves to interact with people and she is crazy about gadgets like mobiles and cameras. She likes to read and search about gadgets, and their features. She loves to stay in tune with the happenings of Hollywood and Bollywood. Also, she is passionate about reading novels and creative arts.
Facebook
Twitter
WhatsApp
Linkedin
ReddIt
Email
Previous article
The Web Versions Of WhatsApp gets new updates
Next article
Panasonic T33 smartphone with 21 Indian regional languages launched in India for Rs 4,490