Moto G6 Review: Premium looks, performance could have been better 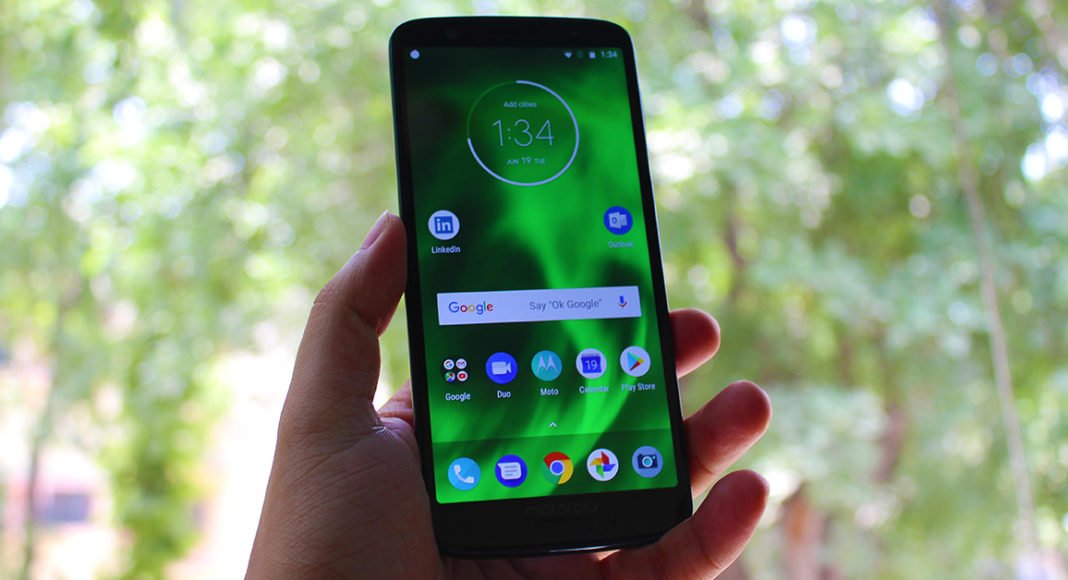 We have been huge fanboys of Motorola phones since its inception in India, more than two decades ago. The Moto RAZR series was one of our favorite at the time and no one came close to it when it boiled down to premium looks and thin bezels. Couple of decades later the game has changed and smartphones have taken over the world. Moto too has changes its strategy, but has seen some turbulent times. They recently launched the Moto G6 in India, after its debut in Brazil. We ran our usual tests on this smartphone and this is how it fared on our review bench.

Let’s start with the aesthetics. The Moto G6 is inspired by the Moto X4, you will find a lot of similarities between the two starting from the watch dial like dual camera cluster at the back to the all glass rear panel and curved edge design. Being inspired sometimes is taken in the negative sense, but in this case it is good. Since the worthy stuff from the more expensive Moto X4 has come down to the budget smartphone Moto G6. Dressed in midnight blue, the Moto G6 sports an aluminum band around the edges, which has the power button and volume rocker key on the right, a curved dual SIM tray on top and USB type C charging port along with a 3.5 mm audio jack at the bottom. There is no speaker grille on this mobile, you ask why? Because the ear piece doubles up as the loud speaker. This is both a good and bad thing, you can enjoy media better with a front firing speaker, but at the same time chances of it getting ruined are higher and your call quality might go down.

The front of the smartphone has a large 5.7-inch display with 75.4 percent screen to body ratio. This is accompanied by Corning Gorilla Glass 3, which protects it from dust and thuds. The touchscreen is FHD+ (1080×2160 pixels resolution) and has an aspect ratio of 18:9 with 424 ppi density. On top of the screen users will also find couple of sensors like the proximity one, under the screen the company has placed its logo and a haptic touch sensitive button. Users can enable the one touch button control, after which the bottom nav bar on the screen disappears. So, how does one navigate then? By using finger gestures on this haptic button. For example, to go back to the previous page on the browser you can swipe left on the button. Swipe right and the OS will show the list of open apps.

This is a place where Moto G6 left us with a mixed bag of feelings. While we loved the camera performance, sound quality and the excellent display, there was the occasional speed issue with the device that was off-putting. But first, let’s talk about its specifications. The Moto G6 comes in two variants one with 3GB RAM and 32 GB storage, and the other with 4 GB RAM and 64 GB storage. We were using the 4 GB RAM version.

With it the device has Qualcomm Snapdragon 450 Octa core SoC supporting 1.8GHz clock speed. Graphics are powered by Adreno 506 chipset and the Moto G6 runs Android 8.0 not 8.1 like the other devices in this price bracket. The memory can be upgraded by up to 256GB using a microSD card and the phone has two nano SIM slots with it. Everything on paper seems fine, except that eye hurting Snapdragon 450 CPU. Frankly, in this price range its competition has much better chipset options.

Because of the same, we experienced occasional slowdowns while switching between apps and when browsing (when multiple tabs are open). Graphical game performance is not super either. Yes, the display does full justice to the device, but you cannot play graphic hungry games like PUBG on it properly. We ran the AnTuTu benchmark on it, where it scored just 61,496 points. On Geekbench 4’s compute test it got only 2,295 points, while on the multi-core CPU test it got 3,147 marks. All of it showcase subpar performance.

Moving past that, there are some good features of the smartphone besides its superior looks. We loved the movie watching experience on it and it got better with the ear plugs that come in the box. The cameras work well with the rear powered by a 12MP primary plus 5MP secondary sensor that adds depth (bokeh effect). They are just a step behind the competition, but do have features that will give the opposition a run for its money. One in particular we loved is the spot colour mode, where the user can select a colour on screen and only that colour stays and rest of the picture turns grayscale. The shots during the day were nice and crisp, in low-light or at night the edges did lose some of its sheen. Videos too were bright and nice, but we have defiantly seen better from the Honor’s and Xiaomi’s in this price bracket. Front camera is powered by a 16MP sensor with LED flash. This the company says is one of Moto G6’s main features. The images here are good and become better when using the LED flash. The front camera can also record video at 1080p. A better resolution is always favoured these days on social networks and the Moto G6 front camera delivered a good close to life colour experience for that. Battery lasted for more than 22 hours for us, even though it has just 3,000 mAh of it. We used the phone nominally with mixed use of WiFi and 4G. Our usage also included playing few YouTube videos during the day, voice calls and a game or two here and there. For heavy users the battery life will drop further, but keep the charger handy as it can turbo charge the phone in minutes.

The Moto G6 comes with Android 8.0 not 8.1 on it. Which does not take away from the experience, but one would want the absolute latest in terms of OS when buying a new device. Moto actions do play house in this smartphone and all the lovely features come here. Like a quick twist of the hand opens the camera app and if you chop twice the torch is enabled. Also, if you want to take a screen shot just press three fingers on the screen and the device will take a screen grab.

There is no dedicated button for the app drawer on the Moto G6, but one can swipe up on the home screen and the list of apps will be shown. There is no bloatware on it too, which does give it an additional star on our rating sheet.

All in all, we liked and disliked the device. We absolutely love how it looks and feels in the hand, even though the rear panel is a fingerprint magnet. We just cannot get over the price bracket it is in and the kind of chipset it offers here. If you are looking for a trendy phone with a great selfie camera and a great screen in a budget, the Moto G6 could be your best buy. But if you are looking for extreme performance, you might want to look elsewhere.

Sulabh Purihttp://www.gadgetbridge.com
Sulabh Puri is the Editor In Chief of GadgetBridge.com. A content specialist, he started his career young and it has been a rewarding 15 years for him. Before heading Gadget Bridge, he was the Editor of Times of India (TOI) Technology and GadgetsNow.com. He has also led TOI’s international edit arm as the Editorial Head of Business Insider India and Tech Radar India. He has also worked with various media houses such as the India Today Group and Cybermedia. He loves everything ‘gadgety’ and enjoys tinkering with new tech toys and automobiles. A graduate in commerce from Delhi University, he is also an adept graphic designer. When he is not working, he can be found in the kitchen, cooking mouth-watering chocolate cakes and croissants.
Facebook
Twitter
WhatsApp
Linkedin
ReddIt
Email
Previous article
YouTube Music and YouTube Premium officially launched in 17 countries
Next article
Reliance Jio offers extra 1.5GB daily data on these plans

- Advertisement -
- Advertisement -
We have been huge fanboys of Motorola phones since its inception in India, more than two decades ago. The Moto RAZR series was one of our favorite at the time and no one came close to it when it boiled down to premium looks...Moto G6 Review: Premium looks, performance could have been better