Samsung Galaxy A70 review: For the love of all things large 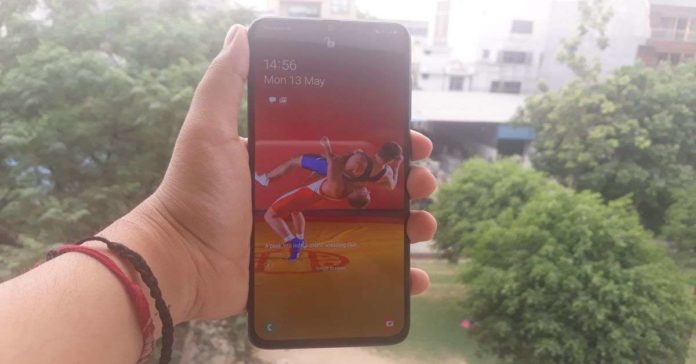 News is that more Samsung smartphones will be added to it’s a series in the coming months. The latest that has been launched in India is the Samsung Galaxy A70. It comes with a triple rear camera setup, has a massive 4,500mAh battery and is powered by Qualcomm Snapdragon 675 SoC. At a price of Rs 28,990, it has everything that makes it sound good on paper. But how good is it actually? We spent quite a few days with the mobile phone and here’s our review of the Samsung Galaxy A70:

Samsung Galaxy A70 design and display

Samsung Galaxy A70 looks strikingly similar to Galaxy A50 at first. But considering the fact that Samsung Galaxy A50’s design was really beautiful. we don’t really have any complaints. Samsung Galaxy A70 comes with the same curved edges and the rainbow-like gradient effect on its dark grey back panel. The colours change very beautifully when light reflects off the rear panel at different angles. We should mention that the handset is available in three colours – Black, White, and Blue. The one that we got for review is the black version, but (as said before) looked more like Dark Grey. The glossy finish on the back panel makes it look like it’s made of glass, but it actually has a plastic body.

Moving on, Samsung Galaxy A70 has a vertically stacked triple rear camera setup and the LED flash of the device is placed right below it. There is also Samsung branding that is placed right in the centre. The right edge of the smartphone houses the power and volume rocker buttons and the left has the SIM tray (which can also accommodate a microSD card). The USB Type-C port, the 3.5mm headphone jack and the speaker grille is placed on the bottom edge of the handset, while the secondary mic can be seen at the top.

One thing that we should mention is that some may find the smartphone too big to hold. We found using it with one hand a little too hard thanks to its dimensions – 164.3×76.7×7.9mm. But then, on the upside, bigger dimensions mean a bigger screen, which in turn can be a very big plus if you use your handset for entertainment purposes.

Speaking of the screen, Samsung Galaxy A70 comes with a 6.7-inch full-HD+ Super AMOLED Infinity-U display that has an aspect ratio of 20:9. The display is one of  the key highlights of the smartphone. The display colours are very rich and vibrant. At the same time, they remain accurate. The blacks are deep and the contrast is just right. The images appear crisp and sharp, which makes up for a very delightful experience. 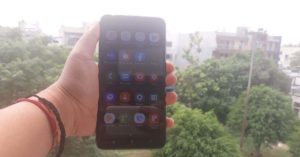 The colours remain consistent at various viewing angles and we encountered no problem while using the handset under direct sunlight. There is an option of turning on the blue light filter mode so that long hours of watching movies or playing games doesn’t strain your eyes. you can also choose between Vivid and Natural modes.

To sum it up, we would say that Samsung could have experimented more with the design of Galaxy A70. It looked a lot like Samsung Galaxy A50 and the one-handed usage on it was slightly tough. But then only because the design is similar, it doesn’t mean it’s bad. We liked it on Galaxy A50 and certainly looks sharp on the A70. As for the display, as we said, it is a delightful experience.

Samsung Galaxy A70 performance and cameras

Samsung Galaxy A70 is powered by Qualcomm Snapdragon 675 SoC and comes with 6GB of RAM and 128GB of RAM. It can hold a microSD card of up to 512GB. The handset houses a 4,500mAh battery that has support for 25W fast charging. For imaging duties, Samsung Galaxy A70 comes with a triple rear camera setup that comprises of a 32MP primary camera with an f/1.7 aperture, an 8MP ultra-wide sensor with an f/2.2 aperture and a 5MP depth sensor with an f/2.2 aperture. There is a 32MP selfie camera on the front panel.

Coming to the software of Samsung Galaxy A70, the handset runs Android Pie skinned with the company’s own One UI. We have always maintained that One UI is far more simplified than Samsung’s Experience UI and have always found it to be better. 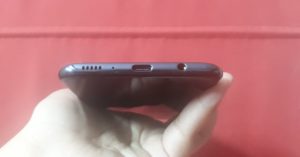 It is far easier to use and finding various settings are quite easy here. It also looks cleaner because of the spaces between icons. One of the best things about it is that you can customise some things about it. The handset comes with a number of pre-installed apps including Netflix, Amazon, Amazon Prime Video and DailyHunt among others, which can be removed if the users want. Samsung Pay has also been added to the device and we saw it in actions, it does work very well.

Speaking about the performance of Samsung Galaxy A70, the Qualcomm Snapdragon 675 SoC of the device carries the weight of most day to day tasks well. We did not encounter any lag while using multiple tabs of Chrome, launching various apps and switching between them. We surfed social media websites and listened to music and at times, we even used Samsung Galaxy A70 for gaming and navigation together. But it never heated up and the performance remained good throughout. 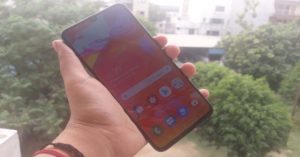 Now that we have mentioned gaming, we should tell you that the smartphone did a very good job when we played various games on it. We played some light ones like Alto’s Odyssey and some graphic-hungry ones like Asphalt 9: Legends. The handset handled it all very well. All the games ran very smoothly on it and we did not come across any heating issues.

We also watched several videos on Samsung Galaxy A70. We already discussed in the Display section of this review that the display image quality is great, and what made the experience better was the surround sound effect thanks to Dolby Atmos.

The in-display fingerprint scanner of the smartphone worked decently, though we have to admit that we found it to be a little inconsistent. Especially when our fingers were soggy, it could not recognise them. Nevertheless, the face unlock system does come to the rescue.

Coming to the cameras of the smartphone, our experience left us with mixed emotions. Most photos taken by Samsung Galaxy A70 turned out to be good. They had vibrant colours and rich details. Most macro shots also turned out very well. When we zoomed in to take close-up shots, the quality remained (mostly) intact. However, one thing that could have been better was shots in which the sun was too bright. The images taken at night do need improvement too. Maybe Samsung will fix it with an update in the coming months. 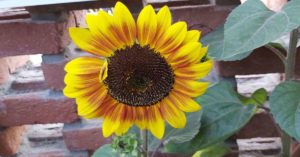 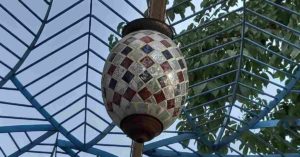 While photography was mostly good, the same cannot be said about recording videos. The camera found it hard to focus on the object and often the videos turned out darker than usual, in spite of optimal lights being there.

Coming to the 32MP selfie camera of Samsung Galaxy A70, most images taken from it turned out very well. You can click selfies with Bokeh mode and wide-angle front shots too. 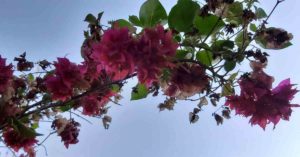 The key highlight of the device is its 4,500mAh battery. We used the handset for social media apps, gaming, navigation, making calls, watching YouTube videos and it still lasted more than a day. At the end of the day, we usually had 30% battery, which we think is very impressive.

The call quality of the smartphone was consistent and good. We could even make and receive calls in areas like basements and elevators, which we think is always a plus.

At a price of Rs 28,990, Samsung Galaxy A70 is a great device. It handles day to day tasks very well and is amazing for gaming. Some aspects of the camera were great, but the video-recording could definitely be better. The battery was definitely the star of the show. It lasted us more than a day, no matter how we used the smartphone. While it’s a great option to consider because Samsung Galaxy A70’s overall performance is very good, but it does have good competition in the price bracket from the likes of Vivo and Asus.

- Advertisment -
Samsung Galaxy A70 review: For the love of all things large News is that more Samsung smartphones will be added to it’s a series in the coming months. The latest that has been launched in India is the Samsung Galaxy A70. It comes with a triple rear camera setup, has a massive 4,500mAh battery and...