HomeReviewsSamsung Galaxy A9 (2018) review: You won’t believe the pictures it can...

Samsung Galaxy A9 (2018) review: You won’t believe the pictures it can click! 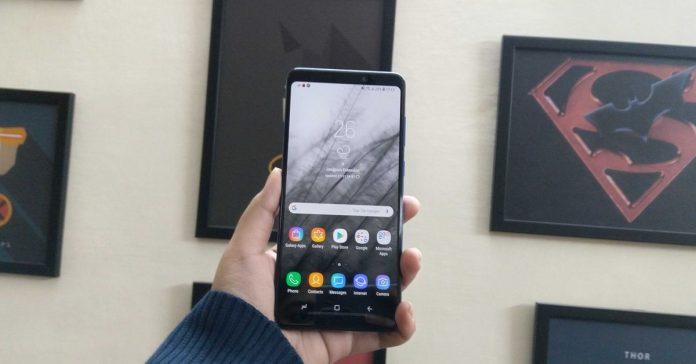 Samsung made headlines last month when it launched the world’s first smartphone with four rear cameras. Needless to say, all photography lovers and Samsung fans were waiting for Galaxy A9 (2018) to come to India too. And the company was quick to launch it here, barely a month after its global launch. Samsung Galaxy A9 (2018) has a beautiful glass-body design, comes in colours that make it stand out, sports the Infinity display and its key feature is obviously the cameras. We got to spend a few days with the smartphone. Read the rest of our review to know if it’s the right buy for you or not:

On the first look, Samsung Galaxy A9 (2018) mobile will remind you of Samsung’s triple camera phone, Galaxy A7 (2018). But then, there are reasonable number of differences between the two. While Galaxy A7 (2018) comes with a flat back panel, Samsung’s new offering’s glass back panel curves towards the edges. Since Samsung Galaxy A9 is a big smartphone, these edges facilitate one handed usage. 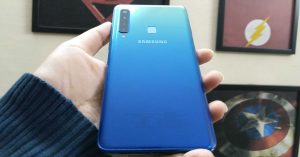 The dual tone gradient glass back panel makes the newly launched Samsung Galaxy A9 look extremely premium. It houses the quad-camera setup, which is vertically stacked, and has the fingerprint sensor and Samsung branding. One thing we have always liked about Samsung devices is that they don’t have the camera bump at the back. And Samsung Galaxy A9 (2018) is no exception to that rule. The side edges of the smartphone house the volume rocker, power and Bixby buttons. You’ll find the SIM tray at the top and a Type-C port, speaker grille, and a 3.5mm headphone jack at the bottom. 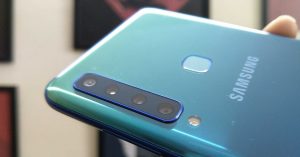 Flip over, and you’ll see the 6.3-inch display of the smartphone. Unlike most other smartphones that have been launched recently, Samsung Galaxy A9 (2018) comes without a notch. And honestly, we don’t have any complains. The bezels at the top and bottom of the device are equal in size. Above the display are the selfie camera, earpiece and the LED flash, and at the bottom, there are in-display navigation buttons.

One thing we really liked about the smartphone is the number of colours it is available in. You can pick up the Samsung Galaxy A9 (2018) in Bubblegum Pink, Lemonade Blue and Caviar Black colours. We found the Pink and the Blue colours of the device to be rather unconventional, but Black was rather ordinary. The one that we got for review was dressed in Blue.

Speaking of the display of the smartphone, it comes with 6.3-inch full-HD+ Super AMOLED Infinity display. If we had to describe the display of Samsung Galaxy A9 (2018) in a single word, we would call it superb. 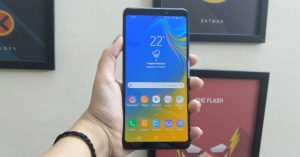 You will get an excellent contrast and the ability to switch between various screen modes including Adaptive display, AMOLED cinema, AMOLED photo and Basic. The Blue light filter option is there for those who have a tendency of using their smartphones in low light or complete darkness. You can enable it manually or schedule the time for it to be enabled on its own.

It projects extremely vibrant colours while maintaining accuracy, and they remain consistent at different viewing angles. But then, the company is known to make devices with beautiful displays. The images were as sharp and clear as one can expect them to be, and we seriously couldn’t put our phone down while we were watching videos on it. We even played 4K content on it, and it turned out to be perfect. While watching videos, you can pinch to zoom in so that they fill the entire screen. It’s a small tip that you can follow for a better viewing experience. During our time with the Samsung Galaxy A9 (2018), we had no trouble with sunlight readability on the device.

Samsung Galaxy A9 (2018) Performance and Cameras

Before we start talking about the performance of the smartphone, let’s take a look at rest of the specifications of Samsung Galaxy A9 (2018). The new offering by Samsung is powered by Qualcomm’s octa-core Snapdragon 660 processor. Now this can be something not everyone would be happy with, considering there are cheaper devices available which come with the most high-end processor that is available – Snapdragon 845. We understand that the smartphone focusses more on photography and less on speed and power-packed performance, but we would have been happier to see Snapdragon 710 instead of Snapdragon 660. 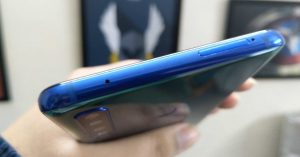 Having said that, we should clarify that this does not mean that the performance on Samsung Galaxy A9 (2018) was bad. It was good, in fact. But we have used devices with more high-end processors so we know that it could have been better than what it is.

Coming back to the specifications of Samsung Galaxy A9 (2018), the smartphone comes with either 6GB or 8GB of RAM and has 128GB of onboard storage. The device runs Android 8.0 Oreo skinned with Experience UI and is promised to get the update for Android Pie. Galaxy A9 (2018) houses a 3,800mAh battery and comes with a fingerprint sensor as well as Face Unlock feature. 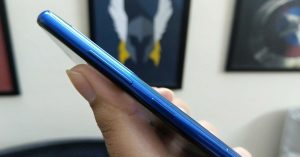 Coming to the software of the smartphone, we would have been happier to see fewer pre-installed apps on the device. In spite of the price tag, Galaxy A9 (2018) comes with apps like Dailyhunt, Amazon, Amazon Prime Video, etc. Other than this, rest was good. The smartphone has support for Bixby and on swiping right from the Home Screen, you will see updates that the digital assistant curates for you. Besides this, if you don’t like the on-screen navigation buttons, you can enable gestures to replace them from the Settings of the smartphone. You can also decide if you wish to see app icons with frames or without them. Overall, the experience was good, but we are waiting for the device to get the Android 9.0 Pie update so that it gets the latest features that its rivals like OnePlus 6T come with.

We did a lot of multitasking with the device. There were times when we used it for navigation for two straight hours and kept watching videos or playing games simultaneously. And we were happy that it took it well. 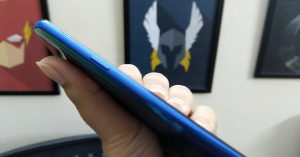 Speaking of gaming, you may find the smartphone warming up a bit when you play heavy games on it. It cannot be called a heating issue, but it does warm up a bit, which is something very common with smartphones that have a glass body. But then, as we mentioned earlier, the company is focusing on photography and not power performance with Galaxy A9 (2018). If you like to play only simple games like Alto’s Odyssey and Temple Run 2, it should not be a problem for you. Only heavy gamers would not be as happy as others.

The call quality of the smartphone was good. We even tried making calls from an elevator, and we could do that without facing any problem. The fingerprint sensor is very accurate and it worked for us each time we tried using it. However, the same cannot be said for the face unlock of the phone. It sometimes didn’t work too well in dark or dimly lit areas.

The 3,800mAh battery was decent. It will last you almost an entire day with heavy usage involving games, YouTube videos, playing music, and long phone calls. If your usage is moderate, it may even last longer. We observed that gaming on the device does consume battery quicker than performing other tasks.

Now let’s talk about the key highlight of the smartphone – its cameras. To recall, Samsung Galaxy A9 has a 24MP sensor (wide f/1.7 aperture), a 10MP telephoto sensor that features 2x optical zoom (f/2.4 aperture), an 8MP ultra-wide sensor that has a 120-degree lens (f/2.4 aperture) and a 5MP depth sensor (f/2.2 aperture).  The company has also said that in lowly-lit conditions, the smartphone combines data from four pixels of primary sensors in order to enhance the quality of the images taken. The modes on the camera app of the smartphone include Panorama, Pro, Beauty, Live Focus, Auto, Scene Optimiser, Super Slow-Mo, AR Emoji, Hyperlapse, and Slow Motion. 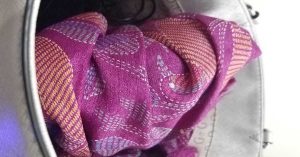 Speaking of the images the camera managed to capture, we have to say we are impressed. The details, the clarity and the colour accuracy are as good as one can expect them to be in the given price range. The shots we took in well-lit conditions came out great and we managed to click some really nice ones during our time with the phone. Moving to the shots taken in dimly lit conditions, the smartphone did a good job there too. The images didn’t lose their clarity or colour quality. We even transferred the photos to our laptop and saw them, and we are extremely happy with the results that we got. Some of them are also on our Instagram channel here. However, at night, the smartphone takes a longer time to focus on the object that is being clicked. 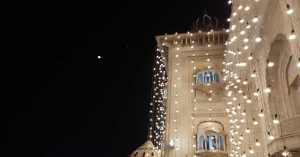 We even clicked some images with Live Focus enabled and the quality of images still remained consistent. Only when we zoomed in to click images did we observe some noise in the photos. 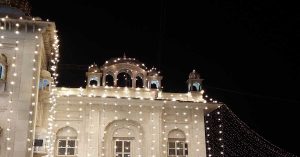 We are extremely happy with the 24MP selfie camera of the device too. Other than the normal Selfie mode, users can choose from Selfie Focus mode, AR Emoji and Wide Selfie mode. While Seflie Focus adds the Bokeh effect to the photos, the AR Emoji has Snapchat-like filters and Wide Selfie lets you capture more area in your picture. Most selfies that we clicked with Samsung Galaxy A9 (2018) turned out to be great. We didn’t even consider editing them before we uploaded them on social media. And how many smartphones can give you results like that? 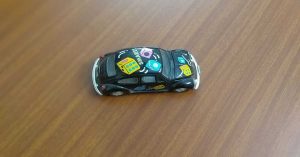 When we ran a few benchmark tests on the device, it scored 1,611 and 5,423 in Single and Multi-core score in Geekbench and 1,41,420 in Antutu. All indicate better than mediocre performance.

The pros outweigh the cons here. In terms of design, Samsung Galaxy A9 is an absolute stunner, it has a great display and the photography on the device truly lives up to what the company promised. Samsung could have used a better processor, but even with Snapdragon 660, the performance of the smartphone was smooth. And because the device has been promised to get an Android 9.0 Pie update, we can’t consider Android Oreo as a minus. If you value speed in a smartphone over everything else, you would be happier with a OnePlus 6T. However, if you don’t use power hungry apps on your smartphone and want decent battery backup, Samsung Galaxy A9 (2018) makes for a good buy. And needless to say, if you are a photography lover, you should just buy it already.

How to track your lost Android smartphone without a tracking app?

Vipul Chandwani - Sep 20, 2021 0
There are a ton of applications that provide a feature to find your lost phone very easily by using the GPS sensor on the...