Is Samsung Galaxy M40 a good buy? Find out in our review here. 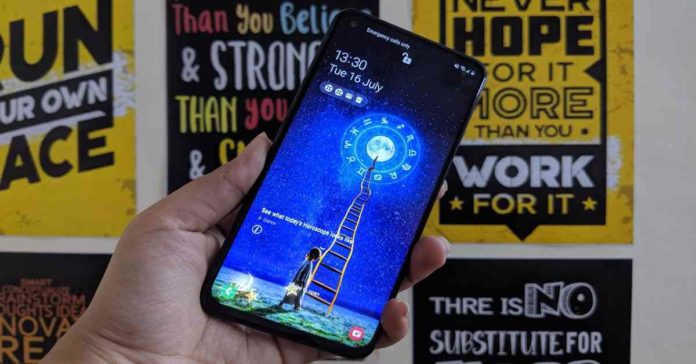 Samsung has been on a launching spree in India. The company has launched a number of devices in its Galaxy A and Galaxy M series this year. The latest to join the list is Samsung Galaxy M40, that is priced at Rs 19,999. The handset has a triple rear camera setup, a 3,500mAh battery and is powered by Qualcomm’s Snapdragon 675 SoC. We spent a few days with it to find out its pros and cons. Read the rest of our review of Samsung Galaxy M40 to find out if it’s a good buy:

If you have seen any other smartphone from the Samsung Galaxy’s M series, you would be able to draw a lot of similarities between theirs and Galaxy M40’s design. It looks very much in-line with the entire range. Samsung Galaxy M40 has a glossy finish on its rear panel that is made of plastic. The back panel is dark in the centre and light towards the edges. The handset is available in two colour variants: Midnight Blue and Seawater Blue. The one that we got for review was dressed in Midnight Blue. 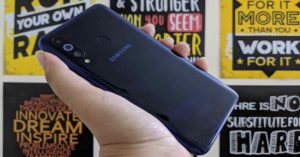 The rear panel of the Samsung Galaxy M40 smartphone comes with a triple rear camera setup, an LED flash, a fingerprint scanner and the ‘Samsung’ branding. The right edge of the device comes with volume rocker keys and the power button. The left side has the SIM card slot and the bottom edge has the USB Type C port, speaker grille and a microphone. It is worth adding that there is no 3.5mm headphone jack on the device. But then, Samsung has added a Type-C headset in the box.

The one-handed usage on the Samsung Galaxy M40 smartphone is fairly easy. We could easily reach out to all the keys of the handset and even the top of the screen of the device to access Quick Settings.

On the front panel, the 6.3-inch touchscreen dominates the smartphone. The bezels that outline the display of Samsung Galaxy M40 are fairly thin and this includes the chin of the device. It also has a punch-hole design that houses the selfie camera of the device. This has support for facial unlock, too.

To sum it up, we would say that the design of the Samsung Galaxy M40 is really good. It has a compact body and is light in weight. One handed usage on the device is very simple.

Coming to the 6.3-inch display of the smartphone, it has a full HD+ resolution of 1,080×2,340 pixels and uses a PLS TFT LCD panel. The display showcases bright and vibrant colours that remain consistent at different viewing angles. The images are sharp and extremely clear. We watched a lot of videos on the device during our time with it and our experience was good. The phone plays videos of 1080p resolution with perfect ease. While some may think of the selfie camera to be a hindrance, we did not find it to be too disturbing. 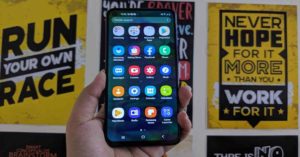 Samsung Galaxy M40 also has the ‘Screen Sound technology’, that enables it to produces sound through vibrations through the display. So the handset does not require an earpiece. Other than that, there is also Widevine L1 Certification for HD video streaming.

The sunlight readability of the Samsung Galaxy M40 smartphone is decent too. In a nutshell, we would say that the display of the device is another of its good aspect. If you spend hours watching Netflix content on your device, you would not be unhappy with Samsung Galaxy M40’s screen performance.

Here’s a look at the specifications of the Samsung Galaxy M40 before we begin talking about its overall performance. The smartphone is powered by the octa-core Qualcomm’s Snapdragon 675 SoC clubbed with Adreno 612 GPU and packs 6GB of RAM. The device has 128GB of storage and can hold a microSD card of up to 512GB. Samsung Galaxy M40 runs Android 9 Pie skinned with One UI and houses a 3,500mAh battery with 15W fast charging support. 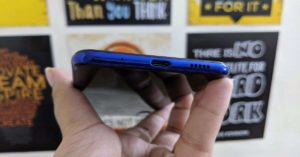 Coming to the software of the device, as we just mentioned, Samsung Galaxy M40 runs OneUI based on Android 9.0 Pie. The software of the smartphone is exactly like the one on the other recent Samsung Galaxy devices. The icons are bigger than the previous UI of Samsung and it looks a lot cleaner. The device comes with Google’s Digital Wellbeing and has support for gestures. Make sure you pay attention while setting up the phone as you will have to uncheck a few options so that you don’t receive too many notifications. You will be spammed otherwise.

Finally, let’s talk about the performance of the smartphone. We used the device for a lot of multi-tasking. We opened multiple tabs of Chrome on it and kept on switching between apps and faced no lag while doing this. We used the Samsung Galaxy M40 for playing games and navigation at the same time, and even then, we did not encounter any problems. 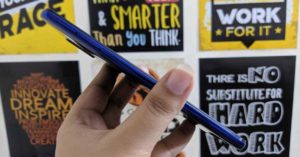 Speaking of gaming, the smartphone handles anything from Alto’s Odessey and Temple Run 2 to Asphalt 9: Legends. However, when we tried playing PUBG Mobile on it, it did warm up a bit. But then, that was the only time when this happened. On the upside, because the display of the device offers a full-screen experience, it was fun to play all these games on it.

Most of the apps worked well on the device in spite of the fact that it has a punch-hole design. The call quality of the Samsung Galaxy M40 is good and the company’s Screen Sound Technology worked well during our usage. Although we did not have any trouble hearing the caller, we also felt that at times, the volume was too high in spite of being set at the lowest.

The 3,500mAh battery is one amongst the biggest strengths of the Samsung Galaxy M40 smartphone. With usage that involves phone calls, gaming, social media apps, watching videos on YouTube and navigation via Google Maps, the battery of the handset lasted more than a day for us. We consider this to be impressive as our usage was heavy. Samsung Galaxy M40 has support for Qualcomm’s Quick Charge technology and comes with a 15W fast charger. In an hour, the device charged more than 80% each time.

Coming to the cameras of the handset, it has a triple rear camera setup that consists of a 32MP primary lens, an 8MP wide-angle lens, and a 5MP depth sensor. The camera app does not have support for OIS and it does not have the best autofocus that we have seen. But then, on the upside, you would be able to record 4K and slow-motion videos. 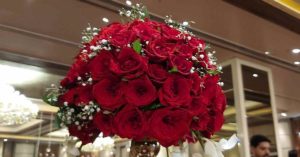 Like most other smartphones that come with high-resolution camera sensors, the 32MP lens saves images in 12MP resolution by default. However, you would get the option of saving them in 32MP resolution too. 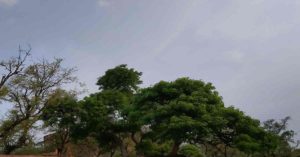 We personally found the camera performance of the handset to be a little inconsistent. In good lighting conditions, they seemed to be respectable most of the times. However, when we transferred them to a laptop and saw them on a bigger screen, the image quality seemed different. It did not seem as sharp as it did otherwise. Some shots also seemed to have inaccurate colours and were grainy. The zoomed in shots also lacked clarity, in some cases. Low-light photography was not the best aspect of the handset either. 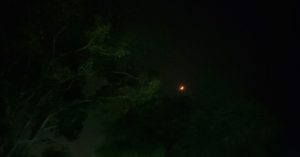 We got some good shots using the 16MP selfie camera of the smartphone. But then, the performance was inconsistent as it didn’t do the best job in lowly lit conditions.

At Rs 19,999, Samsung Galaxy M40 is a good buy, but then, you should know what you are buying it for. The battery is one of the strongest points of the device and it has a beautiful design. The full-screen experience and the ability to handle heavy-duty tasks are also upsides of the handset. The good video-watching experience is a big plus too.

However, the smartphone is not the best when it comes to the camera performance. At times, it performs well, and at other times, it fails to do so. Another downside is that with its default settings, the smartphone gets too many notifications. Not everyone will like the hole-punch design of the handset either.

So, if Samsung Galaxy M40’s good points are on your priority list, you would certainly not be disappointed. It is definitely a good buy.

Garena Free Fire Redeem Codes Today 25 November 2022: Here is how to claim them

- Advertisment -
Samsung has been on a launching spree in India. The company has launched a number of devices in its Galaxy A and Galaxy M series this year. The latest to join the list is Samsung Galaxy M40, that is priced at Rs 19,999. The...Samsung Galaxy M40 review: Smooth performance meets lasting battery