Samsung Galaxy S20+ Review: The 2020 flagship all of us have been waiting for 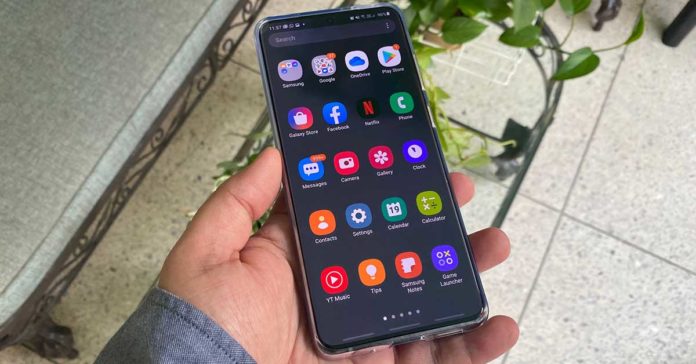 Samsung has been building great smartphones since a very long time and what their designers excel at is making great looking smartphones. This time, however, the theme got a little subtler. There are no flowing edge displays, instead, the form factor has been kept very vanilla, yet appealing. Available in a plethora of colours we got the Cosmic Grey over to our headquarters, which we must say is a very cool colour to own.

Moving on, the design of the Samsung Galaxy S20+ includes a metal band running on the sides of the device. This has the power and volume buttons on the right side, while the primary microphone, USB-C charging port and the speaker grille are placed at the bottom. The top part has the secondary MIC and the dual SIM tray. Flip it around and you would get to see an army of cameras. These are situated in a rectangular camera bump, which also has a third microphone for videos along with a LED flash. The rear has a layer of Corning Gorilla Glass 6, which can also be seen on the front. 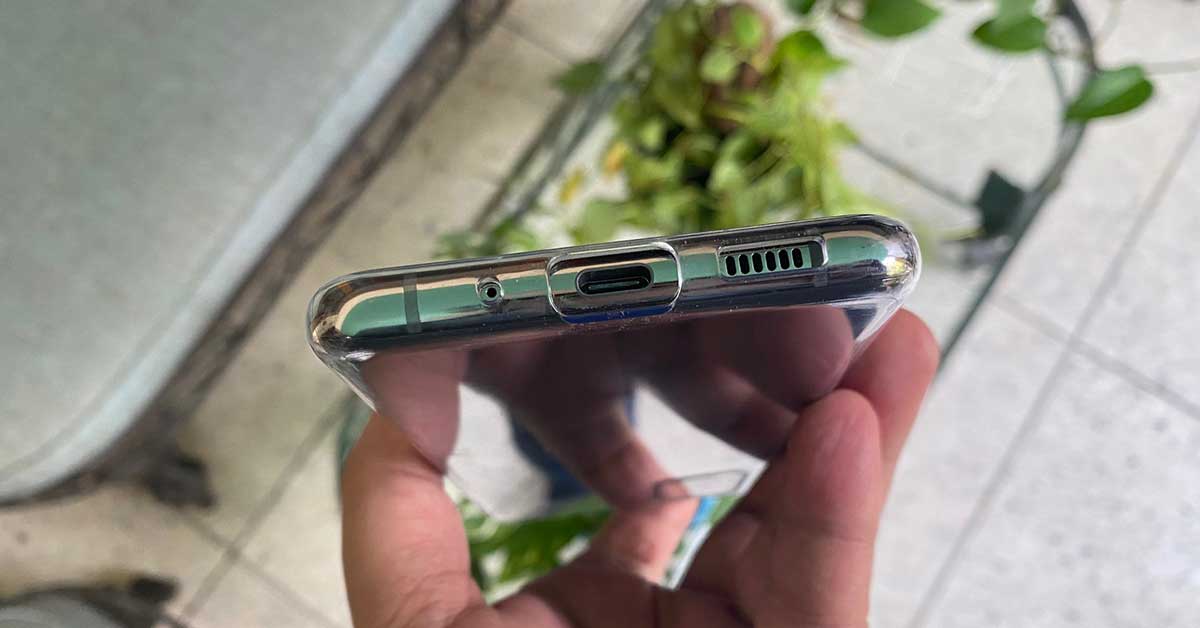 Talking about which, yes, the front of the Samsung Galaxy S20+ also has CG6 on top of a 6.7-inch AMOLED display. The company has also pre-placed a screen protector on top of the display. This is Samsung’s Infinity O display that comes with a selfie camera punch hole in the top middle part of the screen. This does not hinder the viewing much and we could barely make it out when watching YouTube or Netflix videos. Further, the display supports 20:9 aspect ratio, 1,440 x 3,200 pixels resolution and 120Hz refresh rate. This means the screen can refresh 120 times in one second.

So, what does the high refresh rate do? Simply put, the user interface becomes more fluid. However, if you increase the refresh rate, it will use up more battery. Here we used it every day with the 120Hz refresh rate on, so our battery test will be with that, read about it at the end of the article. Moving on, the sunlight legibility of the screen is superb and the character sharpness is top-notch. 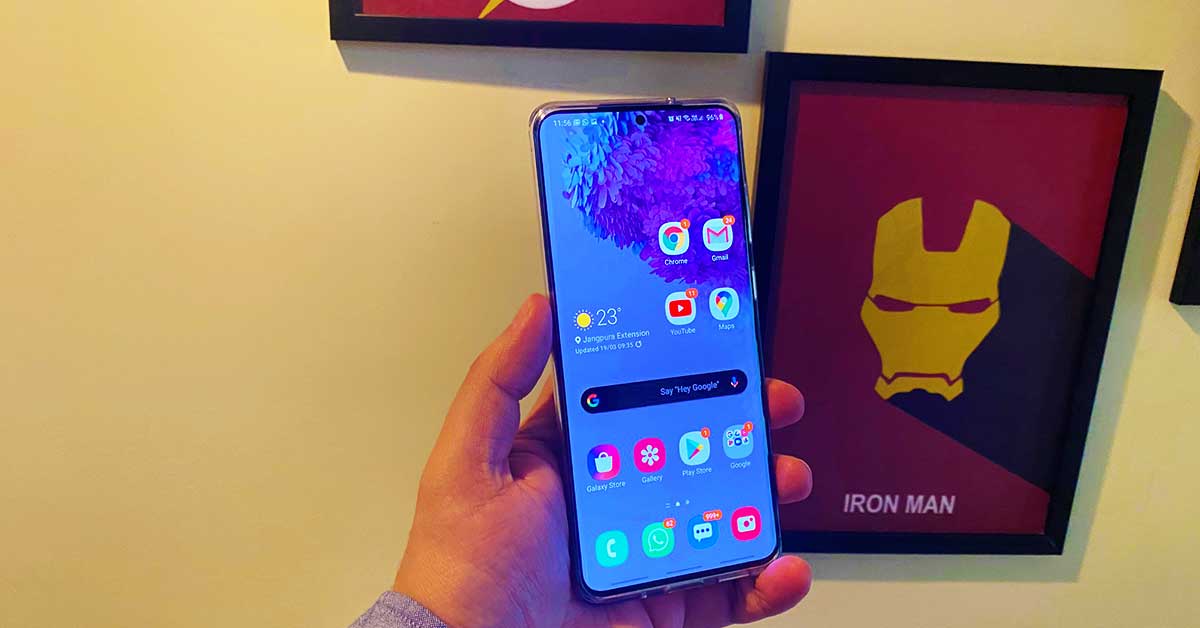 We loved the gaming experience on the Samsung Galaxy S20+. It does a fabulous job with the colours and the smooth display did give us the edge in games such as Mario Kart and Asphalt 9 legends. Things like edge lighting, blue light filter and edge apps panel also come in this smartphone. All in all, Samsung has built close to perfect flatscreen for this mobile device.

To tell you the truth we had a lot of expectations from the Samsung Galaxy S20+ when it was launched. After using it for a while, we were happy with most of its aspects, except one. Can you guess which one, without reading further down? Tell us in the comments if you guessed it right?

On paper, the Samsung Galaxy S20+ is a tank. It comes with Exynos 990 chipset that has an Octa-core CPU running at a max clock speed of 2.73GHz. Graphics are provided by Mali-G77 MP11 chip and this setup is partnered with 12GB RAM/128GB storage (with UFS 3.0). A 256GB variant is also available for people who need more storage. So, before anything else, we quickly downloaded benchmarks such as GeekBench 4. It scored 4,757 points on the single-core score and 11,688 on multi-core score. The compute test on GeekBench 4 gave us a score of 8,819. 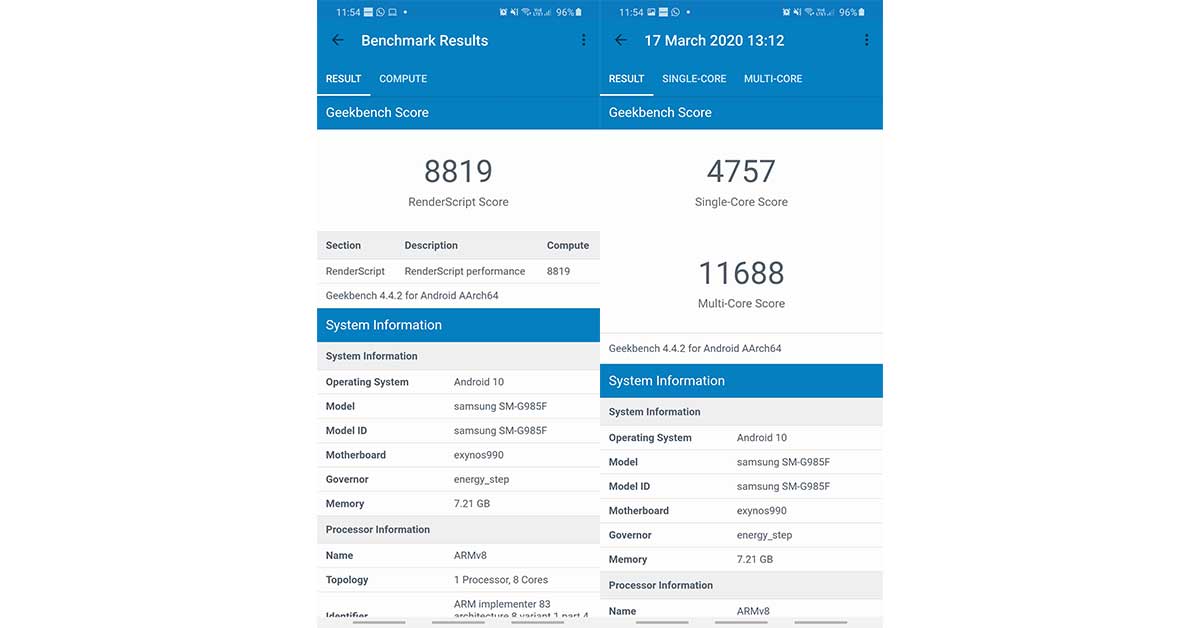 Jumping on the OS (operating system) side, the Samsung Galaxy S20+ comes packs the Android 10 with Samsung UI 2.0 out of the box. As said, the smartphone comes with a 120Hz screen so it enhances the whole OS outlook. There is minimal bloatware since it is a premium smartphone. The quick settings menu comes down when you swipe down from the top and a sperate app drawer in this smartphone is a boon in our books. The navigation can be either kept as screen buttons or gestures. We personally like the gestures as that makes it more intuitive. Users can go back to the previous screen by swiping up from the bottom right, back to home screen by swiping from the bottom middle and will show all the open apps if you swipe up from the bottom left. Over that, assistant menu floating button can also be enabled that does all this and more.

Let’s switch gears and come to the cameras of the Samsung Galaxy S20+. The rear panel of the smartphone holds 4 cameras. This includes 12MP wide sensor, 64MP telephoto, 12MP ultrawide and 0.3MP Time of Flight (TOF) camera. We thoroughly used the cameras and this is the part where we got mixed performance. While the images indoors and outdoors in the wide and ultrawide mode were exceptional, we got inconsistent imagery with the 64MP telephoto camera. Some subjects lost sharpness in this mode and colours also were not up to the mark in low light.

To turn it on one would need to switch over to the 64MP mode, which only works in 4:3 ratio. Otherwise, you would need to switch to the other two lenses that also support up to 30X digital zoom. Here, (when zoomed) you will not get the same clarity as you will get when zoomed out, but you are able to capture faraway objects with decent clarity. Shots in the night mode also gave us mixed results. While some with less ambient light came out of to be good, the ones that were clicked in absolute darkness lost a lot of details. 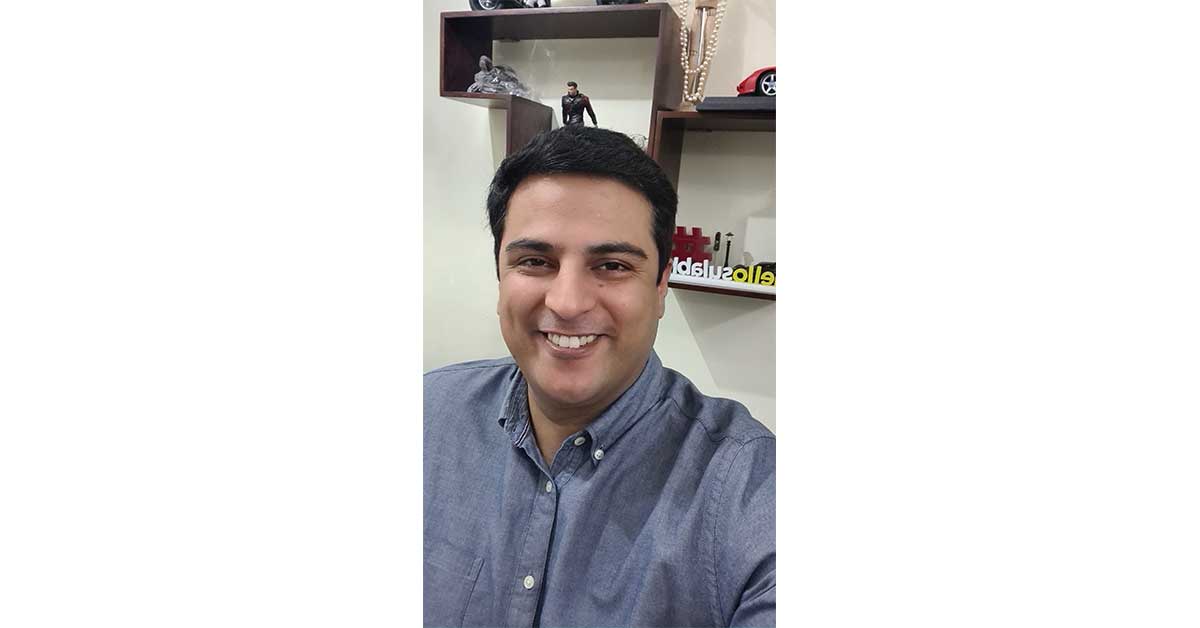 Skipping over the single 10MP selfie camera of the Samsung Galaxy S20+, we were quite happy with it. The colours were good, the sharpness was nice and there is no shutter lag. When clicked in low light the pictures still came out to better than expected. Videos on the rear cameras can be shot in 8K 24FPS and that is another plausible effort by the company. This is the first by Samsung in any of their smartphones and will give video creators the edge. The quality here is very good and colours pop out more under good lighting conditions. The front camera supports 4K videos at 60FPS and here too we were able to get some fabulous videos.

The battery was another aspect we were happy with. Since it has 4,500 mAh battery inside we knew it would last for long. But then when we started discussing the 120Hz display amongst the team, a small sense of doubt did come. Nonetheless, all of it was put to rest once we started using it. We got a full day of battery life with the 120Hz display mode on. Our usage included 2 hours of gaming, a full day of making or receiving calls on the 4G network with WiFi on. This is not bad at all for 4,500 mAh rechargeable cell. The sound of the device is also great. You get twin speakers on it (the ear speaker doubles up as the second loudspeaker), which are quite loud. A pair of AKG headphones are also supplied in the box, that also supply good resonance for videos and games.

All in all, at Rs 73,999 Samsung Galaxy S20+ is a winner if you want top-level performance, superb gaming capability, exceptional display and a rather good camera zoom mode. Yes, the 64MP sensor could be better, but going by past record of Samsung they will patch it up in one of the upcoming updates. Frankly, the price did surprise us as the company has kept it competitive. If you are looking for a flagship that can stay with you for the next couple of years and do not want to break the bank, your search ends here.

Corning Gorilla Glass Victus 2 announced, can withstand drops of up to one meter

Simple and legit ways to Remove the ‘Activate Windows’ Watermark on Windows 10?

- Advertisment -
Recently, Samsung unleashed three new smartphones in India. Yes, we are talking about the Samsung Galaxy S20, S20+ and S20 Ultra. These are the first set of flagships by the company in the year 2020. They are built to outperform any smartphone in the...Samsung Galaxy S20+ Review: The 2020 flagship all of us have been waiting for