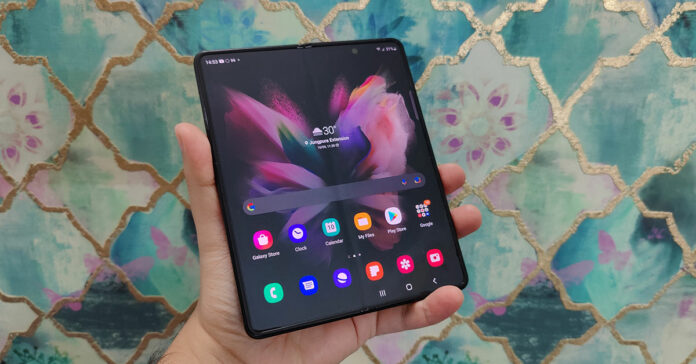 This time the Samsung Galaxy Z Fold 3 is available in three colours: Phantom Black, Phantom Green ad Phantom Pink. We got to play around with the black version that is subtle yet brings a sense of masculinity with it. This time the more premium Gold colour is missing, but something tells us we might see a special appearance by the colour in the months to come. 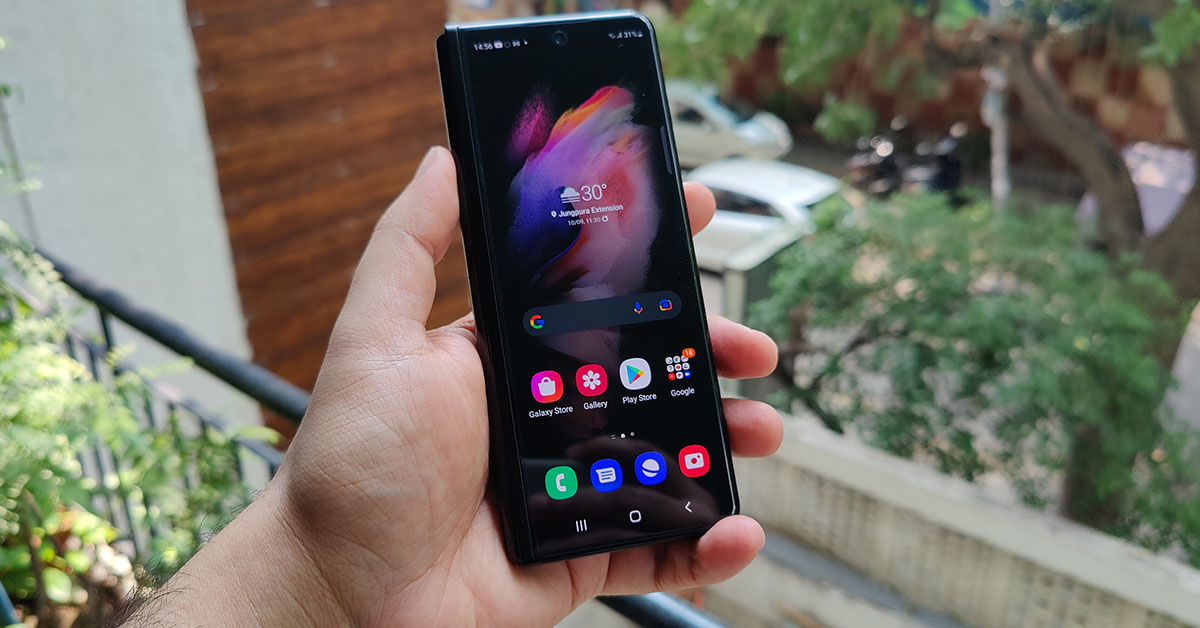 So, let’s talk more about the design and aesthetics of the Samsung Galaxy Z Fold 3. When folded it becomes a regular smartphone (yes, a bit fat but still feels good), which can be accessed with one hand. The screen here measure 6.2-inches and is edge to edge with Corning Gorilla Glass Victus protection on top of it. With that, the company has put a screen protector over it to defend it against those nasty scratches. Here you will find the primary selfie camera as well in a cut-out on top.

The outside screen curves from two of its outer sides and is flat on the inside, that is how good the engineering of this smartphone is. There is a lot of aluminium metal used on this smartphone. The spine is also made of a metal plate where you can see the Samsung branding. Flip it around you will find a triple rear camera setup with the LED flash. 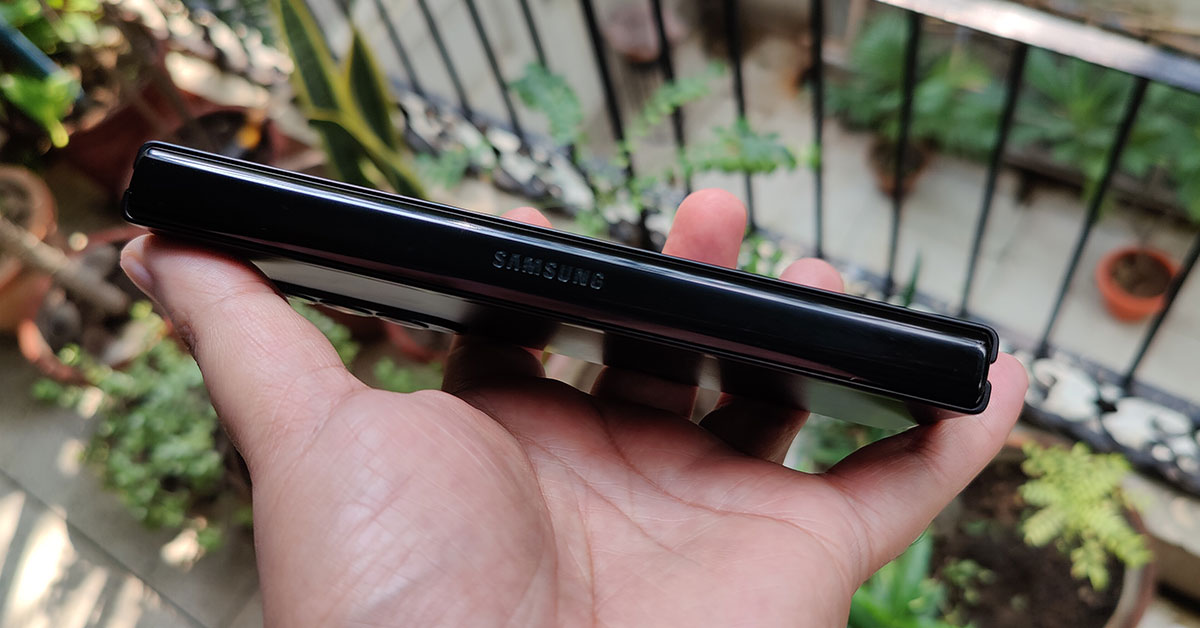 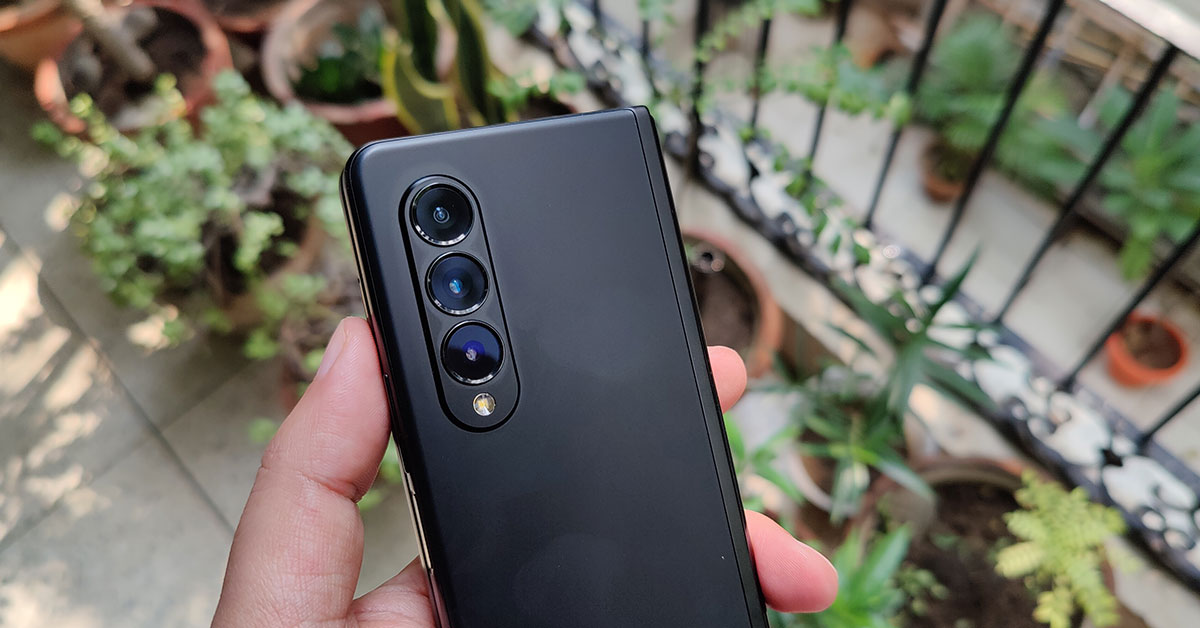 Now time to unfold it. As soon as you do that, you are greeted with a large 7.6-inch AMOLED touchscreen. Both touchscreens support 120Hz refresh rate and HDR10+. The peak brightness of the screen is 1,200 nits and the inside screen is almost edge to edge. Since it is a folding screen it cannot fully edge to edge as a frame needs to hold it. The dig is still there in the middle, but it is not a problem. The experience is seamless when watching movies, videos or playing games. Samsung also provides an in-display secondary selfie camera in the inside screen, which is one of the first we have seen in a smartphone. 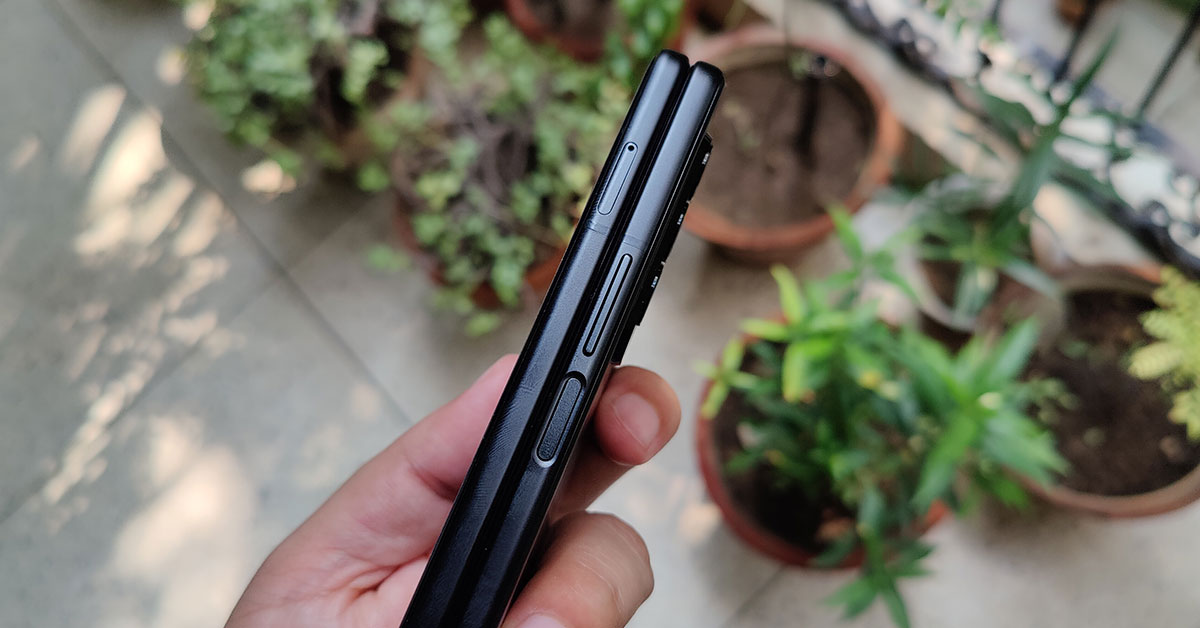 As far as more physical features of the phone are concerned, the Samsung Galaxy Z Fold 3 (when unfolded) has power cum fingerprint sensor and the volume rocker keys on the right, USB Type-C charging port, a speaker grille and primary MIC at the bottom, while the SIM tray and another speaker grille with few additional MICs are present on the left and top (respectively). Folding and unfolding the device is quite simple and the level of flimsiness has come down to zero when compared to the first variation of the Z Fold series. This smartphone feels rock-solid and like the rest of them reminds us of the good old Nokia communicator, but much more advanced. 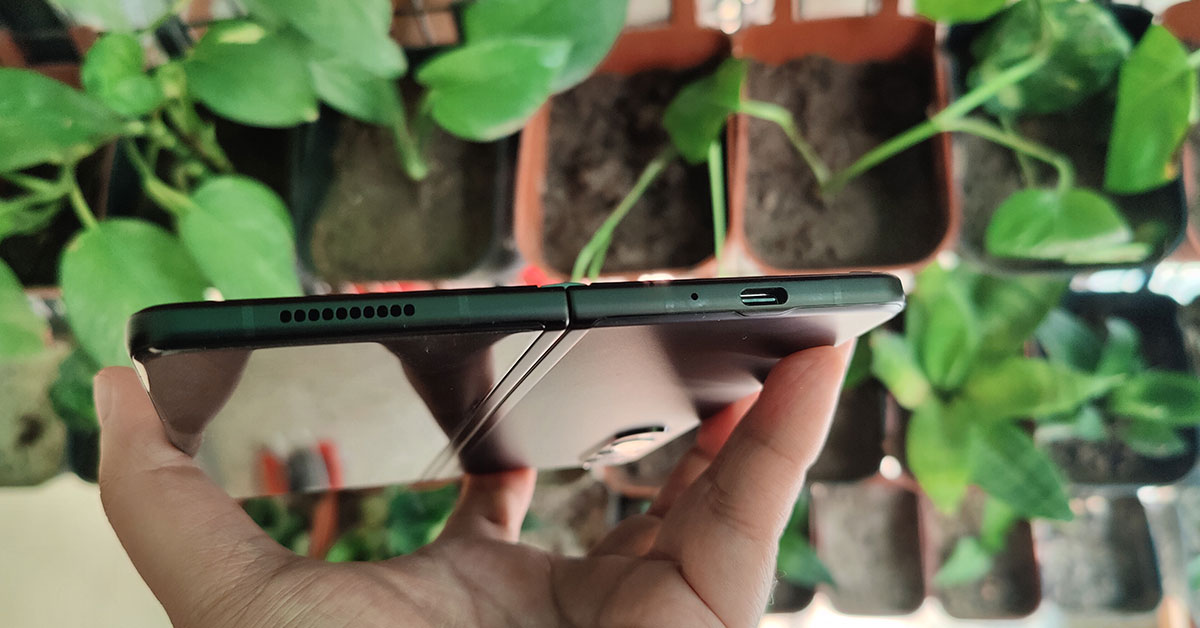 We played games like Asphalt 9: Legends, BGMI, COD: Mobile on this smartphone and we loved every bit of it (on both screens). Watching YouTube Videos, Netflix and our own videos on the device was a pleasant experience, too. The phone seamlessly transforms the content you are grasping on the external screen to the internal screen, the transformation is seamless. Both screens do not wash out under the direct sun and portray great colours. The system-wide dark mode is available, which does help in saving a bit of battery since you are using multiple screens on the same device. Overall, we were quite happy with what we saw in Samsung Galaxy Z Fold 3 and with the great screens, the stereo speakers do well too. The sound is very loud and clear on this device.

Let’s quickly talk about the tech specs of the Samsung Galaxy Z Fold 3 and get it out of the way. The smartphone comes with a Qualcomm 888 chipset that has an octa-core CPU with a max clock speed of 2.84GHz. The graphics are provided by Adreno 660 GPU and it comes in two models. One model sports 12GB RAM with 256GB storage and the other has 12GB RAM with 512GB storage. Both support UFS 3.1 for faster performance of storage and better power efficiency. There is a 4,400 mAh battery inside, which does keep the phone alive for more than 21.5 hours under nominal use, which includes few hours of calling an hour of gaming and 1-2 hours of social media and YouTube browsing and playback.

Sadly, there is no charger in the box but only a Type-C charging cable. Fast Charging of up to 25W is supported with 11W wireless charge support and 4.5W reverse charging capability. On Geekbench 5 the Samsung Galaxy Z Fold 3 scored 607 points in the single-core CPU test, 2,252 in the multi-core CPU test and 4,067 points in the compute test. In the 3D Mark Wildlife test the smartphone scored 5,126 points. All of it indicating good performance and this mobile device is high-end games and power-hungry apps ready. 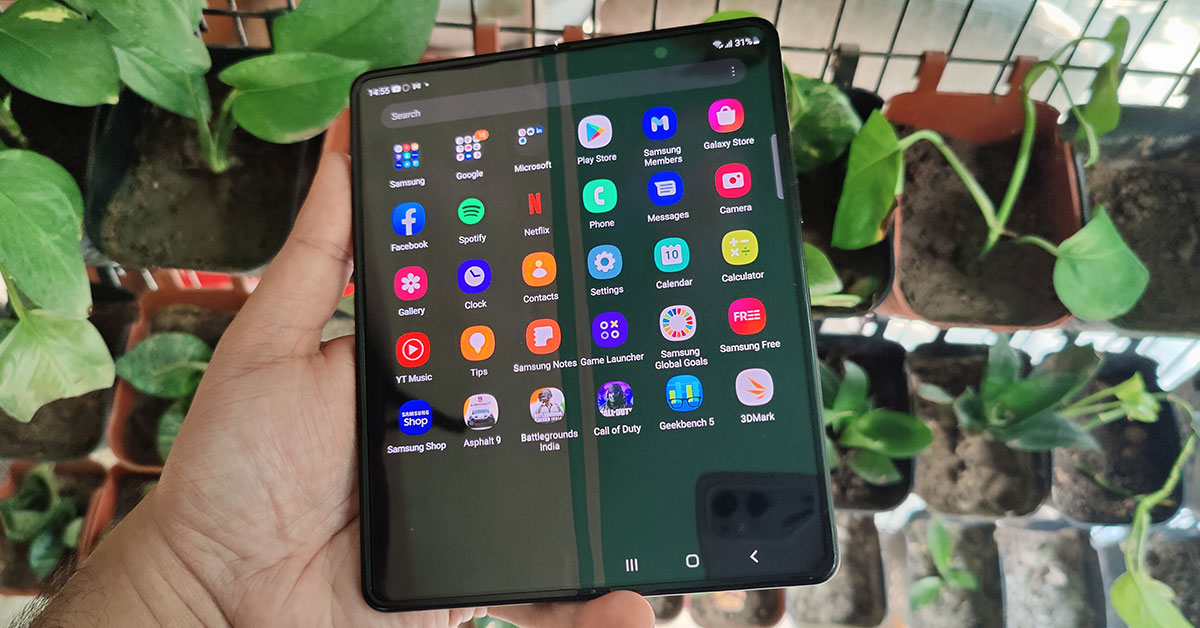 The operating system on the Samsung Galaxy Z Fold 3 is Android 11 with Samsung UI 3.1 skin on top of it. Thanks to the 12 GB RAM and the latest Snapdragon 888 chipset, we hardly came across any lag. The apps and games open in a jiffy and the 120Hz browsing and scrolling experience is top-notch. There is minuscule bloatware and whatever we could find is uninstallable. You get a lot of quick options in the drop-down quick settings menu and users can quickly access recently used apps from the sideswipe menu. We love an app drawer in a smartphone, and this mobile device also has one, so that everything on the home screen looks neat and not cluttered.

During the Samsung Galaxy Z Fold 3 review, we found some neat things. This includes its cameras, there are a total of 5 on this device. The primary cameras at the back consist of triple 12MP cameras (wide, telephoto and ultrawide). Images taken from the main 12MP wide-angle lens came out to be really good and we loved the sharpness along with the colour gamut. During the day all three lenses performed well. However, the quality fell a little in low light and dark areas. The quality becomes much better in night mode, but one can see noise in shots taken in ultra-wide mode during the night.

There are a lot of modes available in the native camera app. These include food, panorama, night, portrait, single take and the more useful pro mode that gives more power to the user. With that, there is an addition of pro video mode as well, which is great for vloggers who want more control over the shot. Videos can be recorded in 4K at 60FPS, but image stabilisation is not there in this mode. For that to kick in you have to drop the FPS level to 30. 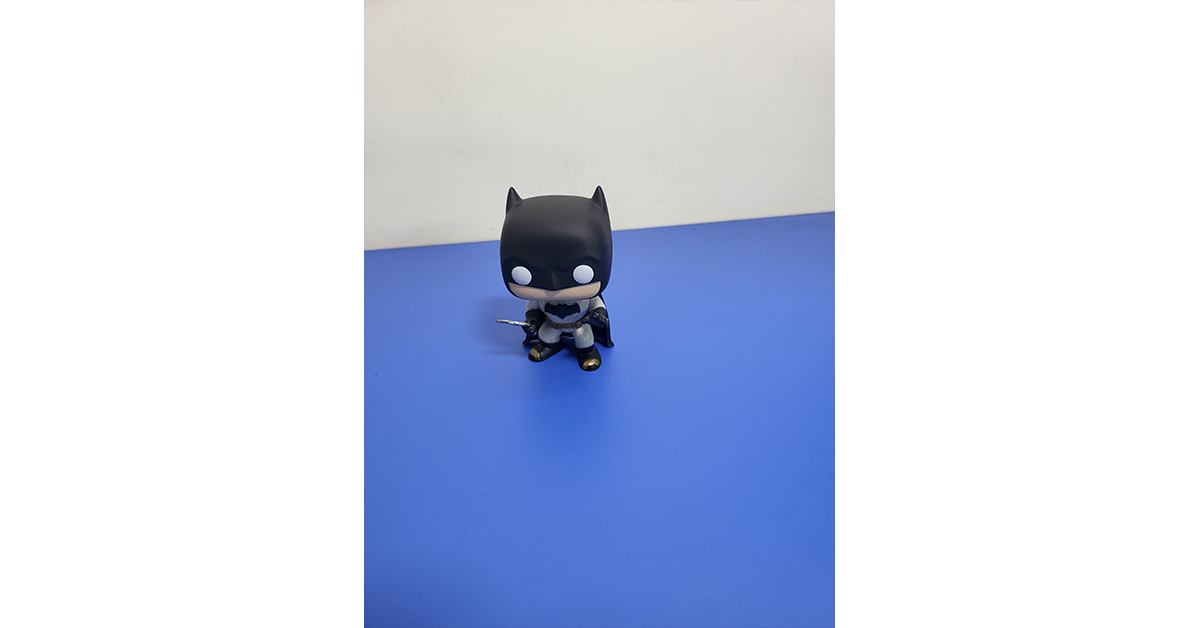 Talking about the selfie cameras, there are two present in the Samsung Galaxy Z Fold 3. One is placed on the external screen that has a 10MP wide sensor (in a cut-out) and the other one is under the unfolded internal screen. This has a 4MP sensor with a 1.8 aperture size. The images clicked by the external 10MP sensor gave us much better results than the internal one. The colours were accurate, and we found the images to be good during low light as well. Considering a 4MP camera under the display we found the camera to be pretty decent in good indoor lights as well as daylight. But it suffered under low light or night. However, we do not consider it as a negative, as it is the first of its type and over time this tech will also become better. 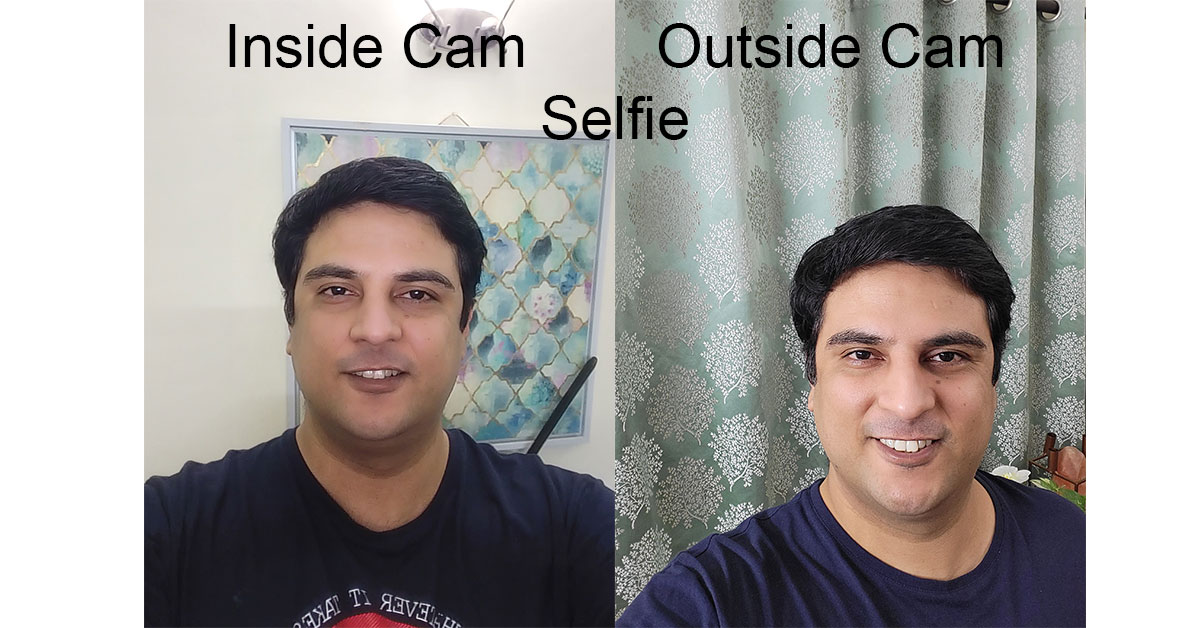 Talking about which, the under-display camera does not hinder the movie or UI experience. Unless you look at it closely or point towards it then it is a distraction. However, when we asked few people in the family to watch a video on it, 4 out 5 people did not even realise that there is a dot there.  The Samsung Galaxy Z Fold 3 also is water-resistant with an IPX8 rating. If you drop it in up to 1.5m of water, nothing with happen to it for 30 minutes. With that, the phone also supports the S-pen. Since there is no Note series now, the S-pen compatibility is shifted to the Fold series. But one would need to shell out extra if they want the S-pen experience with this handheld. And finally, Wi-Fi 6, 5G and Bluetooth 5.2 connectivity are also part of the package.

Overall, we were quite happy with the Samsung Galaxy Z Fold 3. The starting price of this marvel is Rs 1,49,990, which does seem like a hefty amount. The smartphone is not made for everyone, only but for a chosen few. We love it because it brings new-age techniques and combines them in a phenomenal shell. Over that, the split-screen experience is like none other. It is the best of both worlds, a smartphone that doubles up as a tablet. If you are an executive or businessman (or a person who can afford it) that needs security, good cameras, and a very good-looking device, this is the smartphone to get.

On the expensive sides of things

No charger or headphones in the box