Samsung has done a mighty fine job with this new tablet. 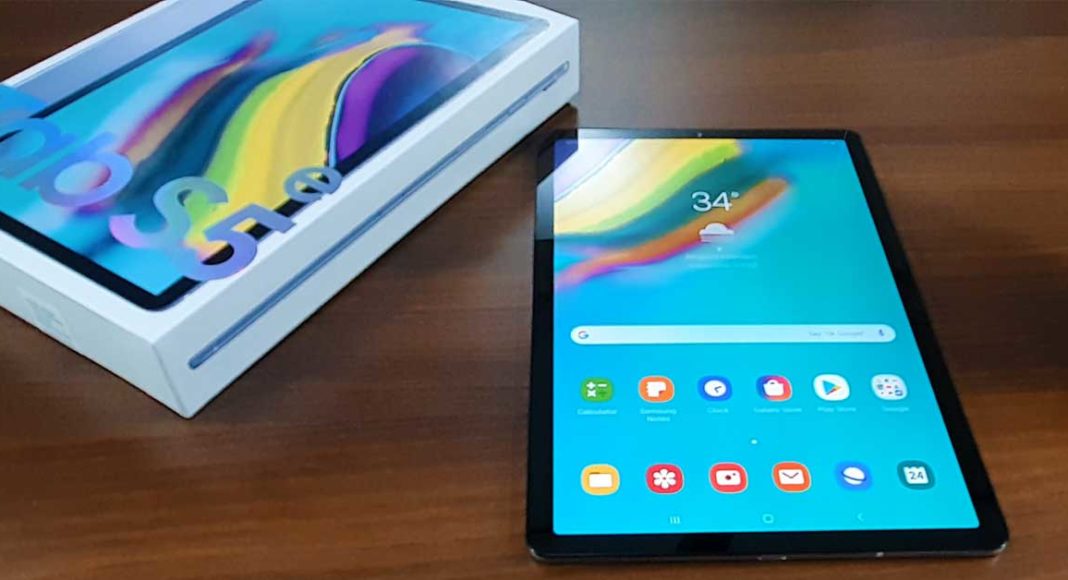 Samsung will not leave any stone unturned this year, seems like. Its range of smartphones in the A and the M series are doing great and now is the turn of its tablets. Yes, we are talking about Samsung Tab S5e, which is in direct competition with Apple’s iPad pro. In certain ways, it is cleverer than Apple’s tablet. But how did it fare in our review bench? Let’s find out.

The Samsung Tab S5e is built out of one block of aluminium. This means you get a seamless body experience from top to bottom and left to right. The front has a large 10.52-inch display with an aspect ratio of 16:10. The Screen is not fully edge to edge. A small black band runs around it but does not distract. When off, the who front façade is unified. An 8MP FHD camera is also placed on the top part of the screen, which helps in video chats and also face recognition to unlock the device.

On the right side (in portrait mode) Samsung has placed the power button within a rectangular dimple. This also doubles up as a fingerprint scanner. Here you will also find the volume rocker keys, a microphone and a microSD card slot to expand the storage further. The left side has the magnets along with POGO connectivity port, which enables the tablet to be mounted on the POGO keyboard (sold separately). This lets you work in DEX desktop mode, which automatically turns on when you attach the two.

The bottom part of the Samsung Tab S5e has a USB Type C charging port along with two speaker grilles. Two more speakers (along with one more MIC) can be found on the top of the tablet as well. So, in total users get 4 speakers on this tablet for a great surround sound experience. 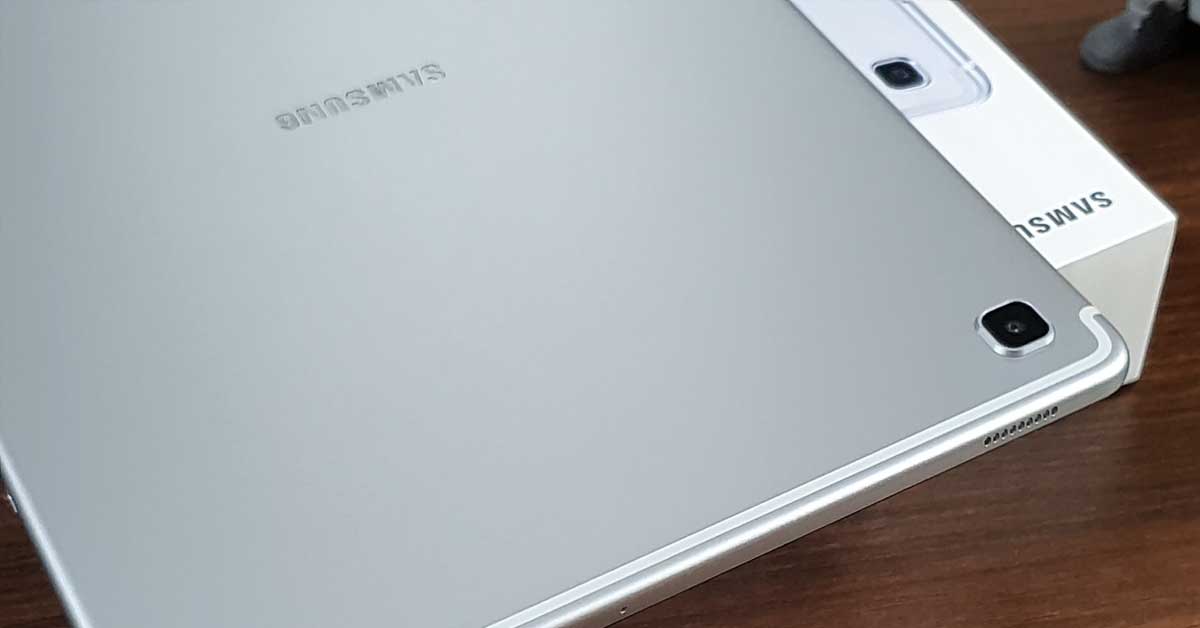 Toss the Samsung Tab S5e around and you get to see a sleek silver metal finish rear body. We were reviewing the silver version, however, there are two more colours available – Gold and Black, both of which look very stylish. At the back, the company has placed a rear camera module (that juts out), Samsung branding and powered by AKG logo. Oh, did we forget to mention the four speakers we just spoke about are powered by AKG. 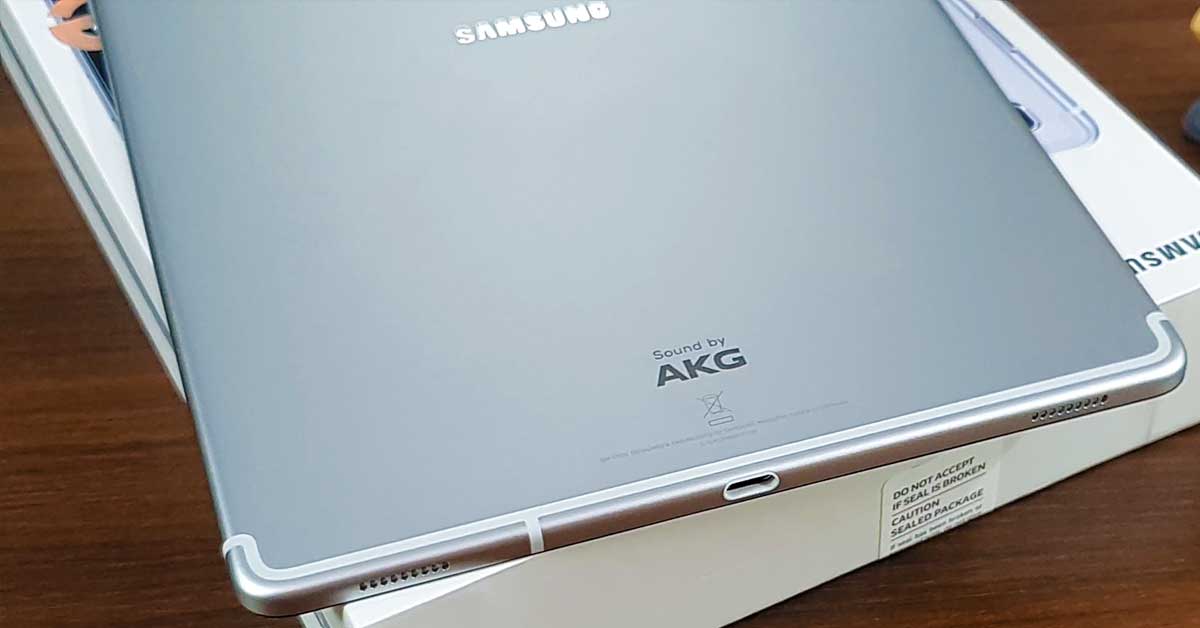 Samsung bought AKG sometime back, so it was about time they got the tech into their tablets too. We will talk more about the sound in the performance section. So that sums up the form factor, let’s talk a bit about its display now. The 10+ inch touchscreen is one of the best we have seen on any tablet this side of the globe. It supports a resolution of 2,560×1600 at 286 pixels per inch.

The graphics here are supplied by an Adreno 615 chip based on Qualcomm Snapdragon architecture. The colours are very vivid, blacks are deep and one can see subjects pop out. Sunlight legibility is brilliant and we loved the movie, and games experience on the larger than life display.

Samsung has done a good job with the Samsung Tab S5e touchscreen. The response time is great and it hardly misses a tap. The icons look nice and the display does perfect justice to the Android 9 ecosystem.

Welcome to the fun part. We love to stress devices and to our amazement, the Samsung Tab S5e came out with flying colours on most counts. With the metal shell, Samsung gives you a Qualcomm Snapdragon 670 Octa-core mobile chipset which has two cores running at 2.0 GHz and the next 6 running at 1.7 GHz. Yes, some might say it is an old chipset, but it still gets the job does pretty darn well, also keep the price of the tablet low, so Samsung can concentrate on other important things like security and more RAM.

The chipset is partnered with 6GB RAM and 64GB internal memory. The memory can be expanded further using a microSD card up to 512GB. To give this large tab extra life, Samsung has installed a rather huge 7,040 mAh battery inside. Four Speakers, as we said, are powered by AKG and come with Dolby Atmos support too. WiFi 802.11 a/b/g/n/ac along with WiFi direct are supported. Bluetooth 5.0 has also been thrown in the mix. Together, these make up for superior performance.

The operating system on the Samsung Tab S5e is Android 9 Pie with Samsung One UI on top. The whole outlook is very stock Android-ish and like the 2019 version of Samsung smartphones, this one also comes with an App drawer. The bloatware is next to none and we did like the Knox security integration.

This gives you protection against malware and other attacks. For additional security, the fingerprint scanner is also there along with face detection. Both of which work well on most counts. It is only that the fingerprint scanner is pretty thin and when the Bookcover keyboard is attached, it misses a scan or two. Since the back panel of the cover comes in the way, slightly. 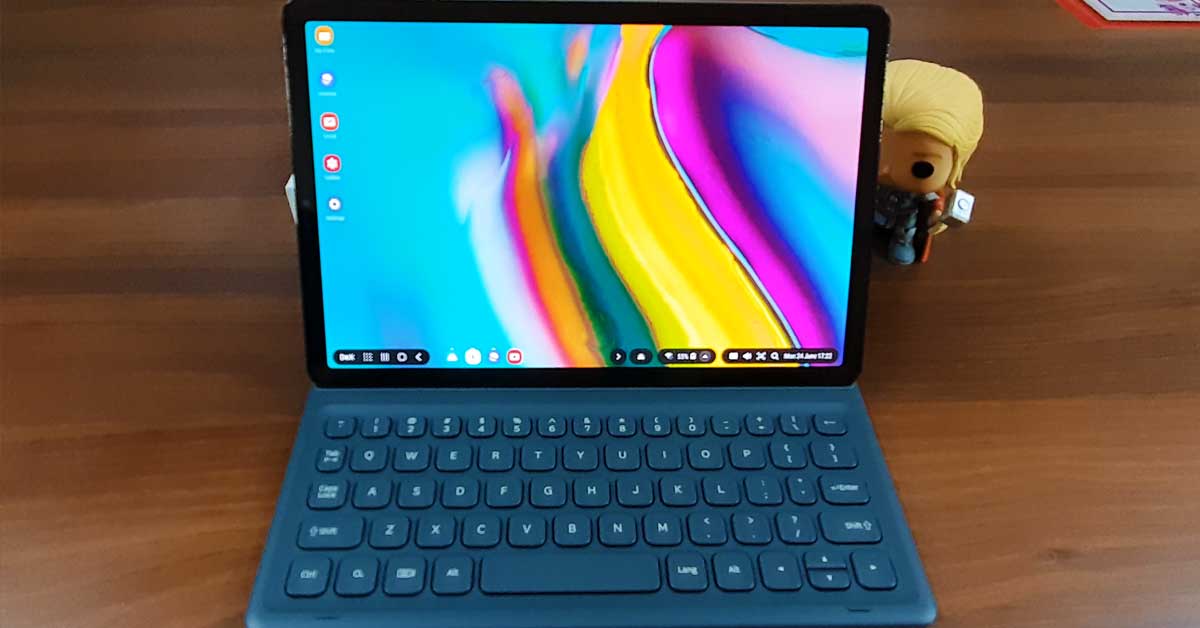 When attached with the Book Cover Keyboard, the DEX mode comes in to play. This turns the UI into a desktop-like mode, which is great to work with. Everything on the screen looks neater, icons become smaller and you get a bottom bar, where you can find the usual set of apps, settings etc. The navigation bar can also be turned on or off and you can use gestures from the bottom for going a step back, to the home screen or to the recently opened apps.

The version of Samsung Tab S5e launched in India is WiFi only. Which is ok, since most of us would have our cell phone with us almost 100 per cent of the times. And one can tether the internet from the mobile to the tablet. In case you do not have the mobile around or is a bit far, you can always connect compatible Galaxy devices to the Samsung Tab S5e. This enables the tablet to receive mobile phone calls and messages coming to your phone.

Moving over to the cameras, the Samsung Tab S5e comes with a 13MP autofocus rear camera, which does a decent job at clicking pictures. The colours look natural but one can find a bit of grain at the edges. You can produce good pictures from it, but do not expect smartphone-like imagery from it. Same is the case with the front camera. It supports 1080p video, so one can video call in good resolution. Things like Bixby vision, stickers and HDR mode have been added to both the cameras. 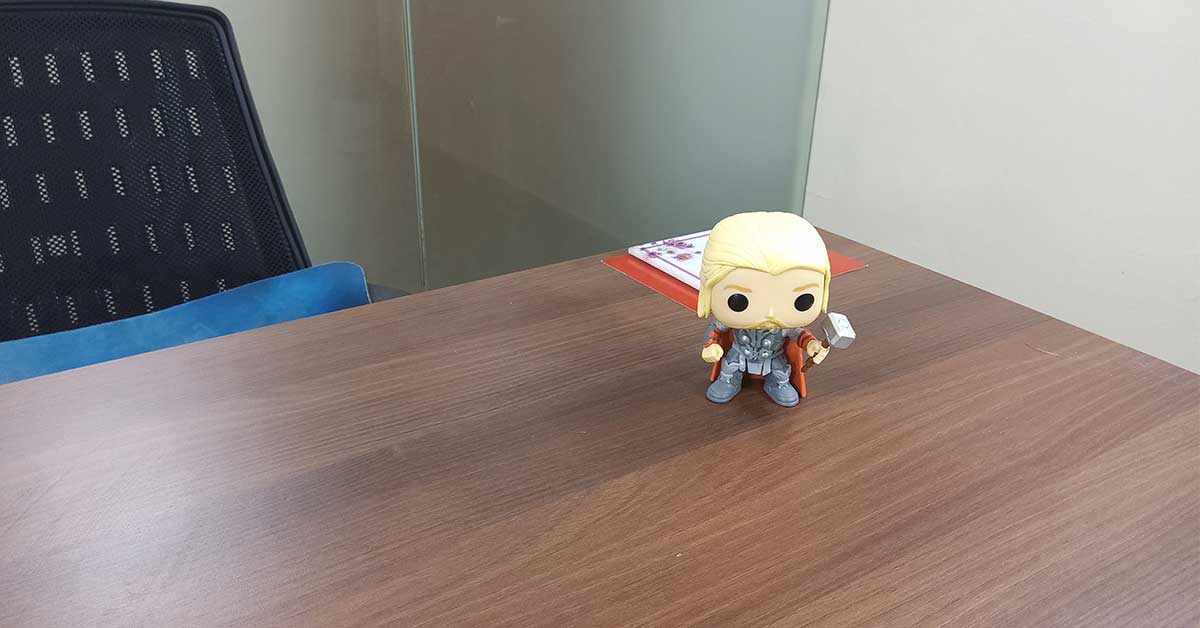 The battery life of the Samsung Tab S5e is another bright point of this tablet. We were able to get over 10 hours of work time with it, at 50 per cent screen brightness and WiFi connected at all times. Also, the Bookcover keyboard was attached to it 90 per cent of the time.

On the benchmarks, it did a fine job too. On Antutu it captured a score of 1,53,298. While on Geekbench 4 the Samsung Tab S5e managed a score of 1,625 on single-core and 5,692 on multi-core CPU tests. On the compute test it scored 6,125 points. All pointing towards fair performance. Also, while playing games or watching movies for long we did not find any sort of heating issues. 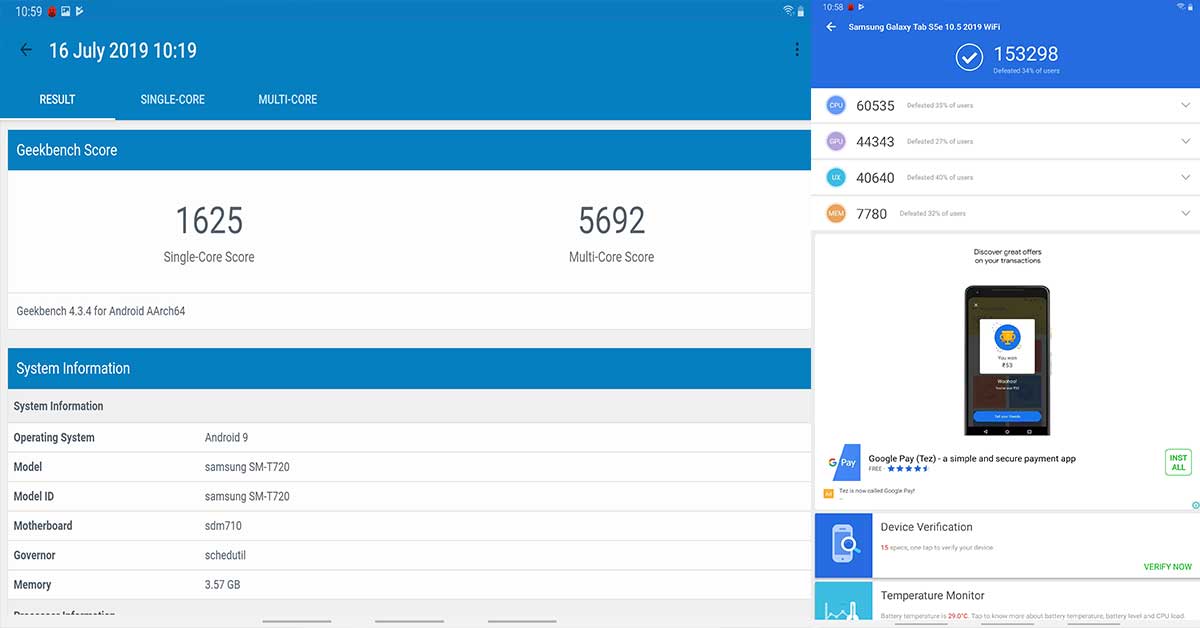 Talking about movies, we loved the experience. Netflix app comes on it as default and watching the latest shows on it with Dolby Atmos packed on a set of 4 loudspeakers was brilliant. So was the gaming feat. Games like Shadow Fight 3 and Asphalt 9 are pure eye candy. Nonetheless, you will get see an occasional lag on graphic heavy games. So, if you play games like PUBG, keep the settings at medium and you will be fine. Remember, gaming is not the primary aim of this tablet, it is work (at which it excels).

We tried our hand at a bit of everything on this tablet and the experience was fairly good. The security features are nice, the display is super to work with, the Bookcover keyboard attachment works well (which by the way is available at a discount right now at Rs 3,500, additional), apps open smoothly and if you want to use apps like a document editor or spreadsheet maker, Samsung Tab S5e will do perfect justice to them.

Over that, the entertainment features are aplenty. With 400 grams of weight and just 5.5mm slimness, it is very portable. At a price of Rs 34,999 it will not replace your laptop but comes pretty darn close to it.

Sulabh Purihttp://www.gadgetbridge.com
Sulabh Puri is the Editor In Chief of GadgetBridge.com. A content specialist, he started his career young and it has been a rewarding 15 years for him. Before heading Gadget Bridge, he was the Editor of Times of India (TOI) Technology and GadgetsNow.com. He has also led TOI’s international edit arm as the Editorial Head of Business Insider India and Tech Radar India. He has also worked with various media houses such as the India Today Group and Cybermedia. He loves everything ‘gadgety’ and enjoys tinkering with new tech toys and automobiles. A graduate in commerce from Delhi University, he is also an adept graphic designer. When he is not working, he can be found in the kitchen, cooking mouth-watering chocolate cakes and croissants.
Facebook
Twitter
WhatsApp
Linkedin
ReddIt
Email
Previous articleAsus ROG Phone II to be powered by Qualcomm Snapdragon 855 Plus mobile platform
Next articleAmazon Prime Day Sale: Deals and discounts you can avail on the last day

- Advertisement -
- Advertisement -
Samsung Tab S5e Review: The finest Android tablet so far of 2019Samsung will not leave any stone unturned this year, seems like. Its range of smartphones in the A and the M series are doing great and now is the turn of its tablets. Yes, we are talking about Samsung Tab S5e, which is in...