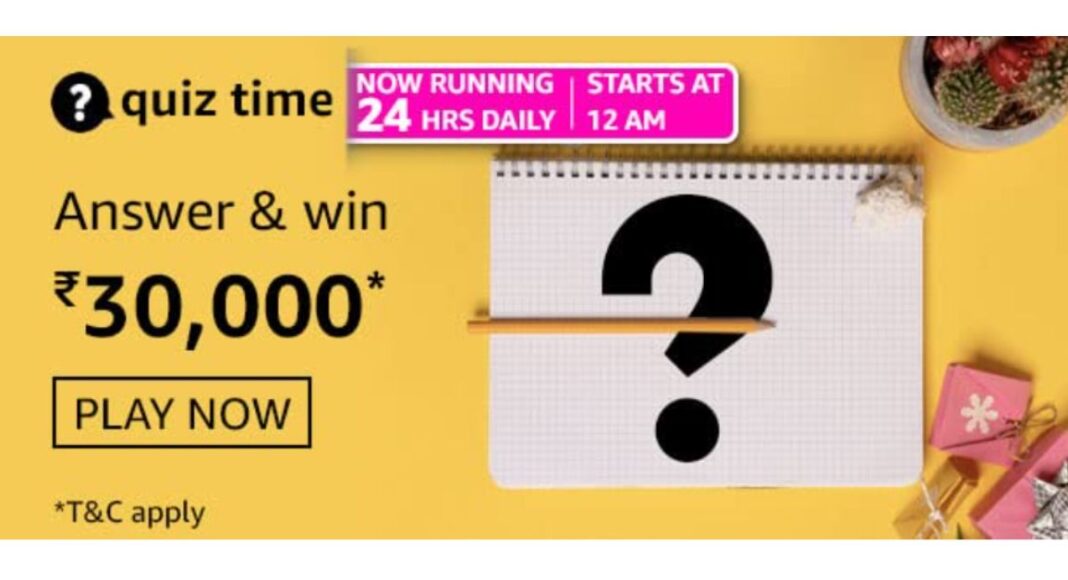 The e-commerce website Amazon continues to keep its customers entertained and in high spirits through their daily quizzes. 1 September 2021 Amazon Quiz has gone live now in its mobile app platform. The daily quiz contest conducted by the company brings an opportunity for the consumers to win exciting prizes. In today’s quiz, you can win the Rs 30,000 Amazon Pay Balance by answering all the questions correctly.

Every day Amazon brings a fresh set of questions for its customers that contains five easy questions based on general knowledge and current affairs. The quiz can be played on the Amazon app from 8 AM to 12 noon. You have to answer all the questions correctly; one wrong answer can make you eliminate from the quiz. By answering all the questions correctly, you will be shortlisted for a lucky draw. The results for the lucky draw will be announced at the end of the month. By participating in the quiz, you can win free products ranging from smartphones, other gadgets and Amazon Pay balance. Check out today’s 1 September 2021 Amazon Quiz questions and answers to win a Rs 30,000 Amazon Pay Balance.

Question 1: Karman line is the internationally recognized boundary of what?

The answer is- C) Space

Question 2: North Eastern Institute of Folk Medicine is located in which Indian state?

The answer is- B) Arunachal Pradesh

Question 3: Linglong One is the world’s first commercial that, being built in China?

Question 4: Who is the only Indian woman to win medals in two consecutive editions of the Olympic Games?

The answer is- A) PV Sindhu

Question 5: Name the pigment that gives hair this colour.

The answer is- A) Pheomelanin

Komila Singhhttp://www.gadgetbridge.com
Komila is one of the most spirited tech writers at Gadget Bridge. Always up for a new challenge, she is an expert at dissecting technology and getting to its core. She loves to tinker with new mobile phones, tablets and headphones.
Facebook
Twitter
WhatsApp
Linkedin
ReddIt
Email
Previous articleWindows 11 to be available from October 5, Microsoft confirmed
Next article1 September 2021 Flipkart Daily Trivia Quiz Answers: Answer to win exciting prizes