Today, Intel unveiled the 13th Generation Intel Core CPUs in India. The 13th Gen Intel Core i9-13900K, is touted as the fastest desktop CPU appropriate for gaming, streaming, and recording experiences. It is one of six new unlocked desktop processors in this group. It has a blisteringly fast clock speed of up to 5.8 GHz, 24 cores, and 32 threads. 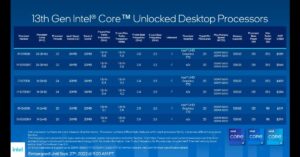 The 13th Gen Intel Core i9-13900K, claims to provide the best gaming, streaming, and recording experience in the globe. Up to 24 cores (8 P cores, 16 E cores), 32 threads, and up to 24 cores are offered in the new Intel Core i9-13900K. It can push high frame rates and provide the fastest gaming experience available across the top titles thanks to its 15% faster single-thread performance and up to 5.8 GHz processor speed.

In addition, enthusiasts can use new Intel 700 series chipset motherboards or current Intel 600 series chipset motherboards to benefit from the performance enhancements of 13th Gen Intel Core processors. Users can take advantage of the 13th Gen Intel Core while also customising their setup to suit their individual features and spending preferences thanks to the combination of the most recent DDR5 memory support and ongoing DDR4 memory compatibility.

The 13th Gen Intel Core desktop CPUs are built on a matured Intel 7 process and Intel’s performance hybrid architecture. Both single-threaded and multi-threaded performance can improve by up to 41% and 15%, respectively.

In addition to the 13th Generation Intel Core desktop processors, Intel is also introducing the new Intel 700 Series chipset. A total of 28 lanes are available from the chipset thanks to eight more PCIe Gen 4.0 lanes, eight PCIe Gen 3.0 lanes, expanded USB 3.2 Gen 2×2 (20Gbps) connections, and DMI Gen 4.0, which boosts the chipset-to-CPU throughput for quick networking and access to peripheral devices.

Komila Singhhttp://www.gadgetbridge.com
Komila is one of the most spirited tech writers at Gadget Bridge. Always up for a new challenge, she is an expert at dissecting technology and getting to its core. She loves to tinker with new mobile phones, tablets and headphones.
Facebook
Twitter
WhatsApp
Linkedin
ReddIt
Email
Previous article
Best ways to fix ‘Google Assistant Keeps Popping Up Randomly’
Next article
Amazon Quiz Answers Today 19 October 2022: Participate to win Rs 500