The launch of 2019 iPhones is months away, but the first renders of the upcoming smartphone have surfaced online already. Renowned leaker Onleaks and Digit.in have collaborated to make the renders of the 2019 iPhone prototypes.

The leaked renders show the upcoming iPhone will have a triple rear camera setup on its back panel and they will be placed in a huge camera bump that will also house the LED flash of the device.

According to Onleaks, these renders are based on EVT hardware, so the designs that have been showcased have not been finalised yet. For those unaware, EVT stands for ‘engineering validation test’, which is the first stage of Apple hardware being formed. The hardware at Apple goes from EVT to DVT or ‘design validation test’ and then finally to PVT or ‘production validation test’.

So, the designs that have been projected in the renders is an early stage prototype. However, the key features like the triple rear camera that can be seen have been finalised, so at least we can get a fair idea about what to expect from the 2019 iPhone.

Coming back to the renders, the LED flash and the camera lenses have been placed in a zig-zag pattern in the square bump that houses them. If this report is indeed true, then those expecting the removal of the camera bump this year would have to be disappointed. 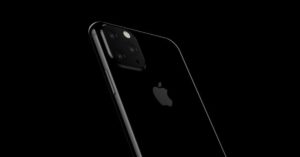 While the rumour that the next iPhone will come with three cameras has been circulating on the internet for a while, the design that has been leaked by Onleaks is very unconventional and we were certainly not expecting this. But then, there is a possibility that the cameras could be aligned differently when the design of the iPhone gets finalised by Apple. Another explanation for the design is that Apple has tried to keep some distance between the lenses in the iPhone to get the depth results accurately. This can particularly be true if the third lens is a depth sensor and not an RGB camera lens.

Apple is expected to launch three iPhones this year as well. However, it is not clear so far if the company will launch the iPhone with the name iPhone 11 or use a different name.

Avani Baggahttp://www.gadgetbridge.com
Avani has an immense love for reading, travelling and food, but not necessarily in the same order. Avani almost started pursuing law, but life had other (better) plans for her and she chose to be a writer instead (luckily!) She previously covered technology at Times Internet and wrote about smartphones, mobile apps and tech startups. When she’s not writing, you’ll be able to find her in book stores or catching up on her social life.
Facebook
Twitter
WhatsApp
Linkedin
ReddIt
Email
Previous article
Acer unveils the convertible Predator Triton 900 gaming notebook with 32GB RAM, Predator Trinton 500 showcased too
Next article
CES 2019: MediaTek launches its new smart home products