The prepaid plans are seeing a maximum price increase of Rs 500.

Indian Telecom company, Bharti Airtel, has announced the new prepaid plans in the country. The company has revised its overall prepaid mobile tariffs in India, which is now seeing a price increase of up to Rs 501.

According to Airtel, it has always been maintained that the mobile Average Revenue Per User (ARPU) needs to be at Rs 200 and ultimately at Rs 300, so as to provide a reasonable return on capital that allows for a financially healthy business model. So it believes that the level of ARPU will enable the substantial investments required in networks and spectrum.

The Rs 79 Airtel Plan price has now been increased to Rs 99. It will offer 50 percent more Talktime, 200MB data and 1p/sec voice tariff. It comes with a validity of 28 days. The Rs 149  plan will now be accessible at Rs 179 with 28 days validity, unlimited calling, 100 SMS/day and 2GB of internet data. Whereas the Rs 219 Airtel prepaid plan price has been increased to Rs 265 that will provide you unlimited calling, 100 SMS per day and 1GB of data.

Both Rs 399 and Rs 449 which comes with 56 days of validity now the users have to pay Rs 479 and Rs 549. Both the Airtel plans offer similar benefits which include unlimited calling, 100 SMS/day but offer  1.5 GB and 2 GB data respectively. 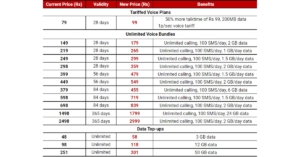 The most expensive ones Rs 1498 and Rs 2,498 Airtel combo prepaid plans are getting a price hike of up to Rs 500. So now the users have to pay Rs 1,799 and Rs 2,999. Its former plan brings unlimited calls 100 SMS/day, 24 GB data whereas the latter one comes with some benefits but offers 2GB of data per day. It should be noted that the price hike will come into effect from November 26.

Komila Singhhttp://www.gadgetbridge.com
Komila is one of the most spirited tech writers at Gadget Bridge. Always up for a new challenge, she is an expert at dissecting technology and getting to its core. She loves to tinker with new mobile phones, tablets and headphones.
Facebook
Twitter
WhatsApp
Linkedin
ReddIt
Email
Previous article
New to iPhone? Do the following first if you own an iPhone 13
Next article
Moto G200 is expected to be released in India next month