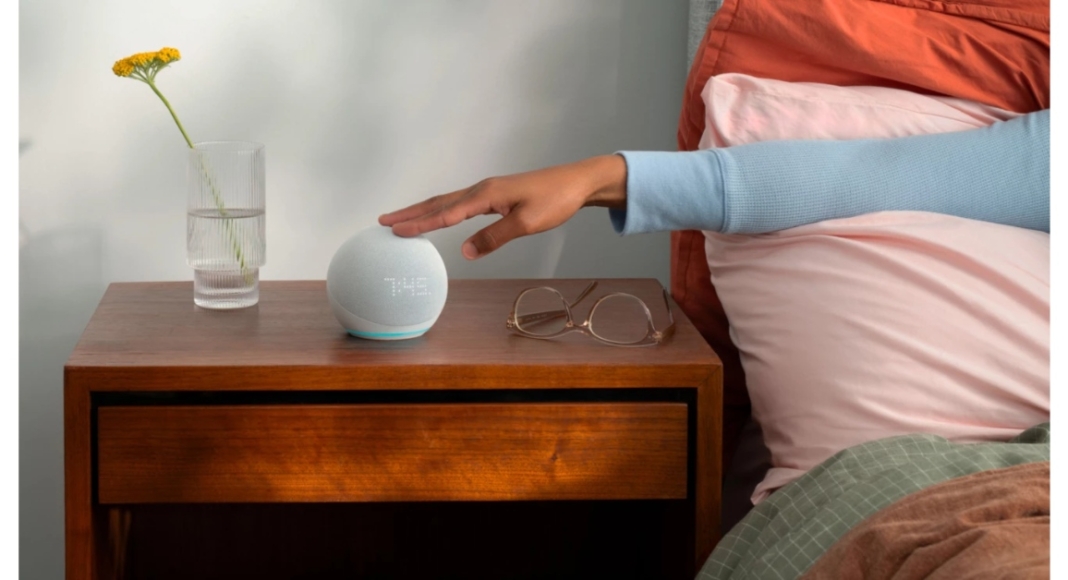 Today, Amazon unveiled the updated versions of the New Echo Dot and Echo Dot with Clock models. The new Echo devices have up to twice as much bass as its predecessors, a temperature sensor, and the ability to act as Eero mesh wifi extenders. Echo Dot Kids now comes in new Owl and Dragon designs.

A new generation of Echo Dot Kids was also unveiled by Amazon, with updated looks, major audio enhancements for Echo Studio, and a slew of new Alexa functions, including a new Fire TV experience on the Echo Show 15. Alexa can now be carried around even more easily thanks to Echo Auto’s brand-new, compact form and adhesive mount.

the brand-new Echo Dot and Echo Dot with Clock have up to double the bass of the previous generation and crisp vocals in the same small, spherical form factor, the revamped audio architecture of the Echo Dot includes a custom full-range driver and the highest excursion speaker of an Echo Dot.

According to the company, new sensors in the Echo Dot and Echo Dot with Clock offer more contextual Alexa experiences, such as the option to ask Alexa to turn on your smart fan automatically when it becomes too warm inside.

The new version also has an accelerometer to enable additional tap gesture controls. As a result, you can easily pause and resume music, turn off timers, or finish a call by tapping the device’s top. The Echo Dot and Echo Dot with Clock, are both powered by the AZ2 Neural Edge processor.

The updated high-density dot technology in the new Echo Dot with Clock provides a more colourful and dynamic way to see information quickly. Now, when you ask Alexa for information, in addition to the time, you may see the name of a song title or artist, the weather, a calculation or unit of measurement, calendar event times, and other features.

Additionally, Echo Dot and Echo Dot with Clock are the first Echo devices to support eero Built-in, which enables them to act as eero mesh wifi extenders and boost coverage across your home. After account linking, eero Built-in can expand the coverage of your current eero mesh wifi network by up to 1,000 square feet. On October 20, eero Built-in will become available for 4th Gen Echo. So that you may get more use out of the devices you currently possess, the 4th Gen Echo Dot and Echo Dot with Clock will also get over-the-air upgrades to acquire eero Built-in capabilities in the coming months.

Alexa is made into a fun, interactive experience for kids by allowing them to hear greetings, jokes, information, songs, and more from the perspective of an Owl or a dragon. In the Amazon Parent Dashboard, parents and guardians can utilise simple parental controls to set daily time limits, filter explicit tracks, and monitor activities.

Amazon Kids+ allows families access to thousands of ad-free books, games, movies, Audible books, songs, and Alexa skills, and is included with the Echo Dot Kids along with a two-year worry-free warranty.

According to Amazon Vocal performances are more prominent in the centre, while stereo-panned instruments are better defined on the sides, mimicking the performance of a hi-fi stereo system and producing a more immersive audio experience that accurately captures the artist’s intention. Furthermore, frequency range extension technology offers increased mid-range clarity, deeper bass, and better performance.

This spatial audio processing technology is accessible on the Echo Show 15 and will eventually be made available on other Echo devices that are compatible, along with Echo Studio. These improvements go beyond Echo Studio’s already-existing support for Sony 360 Reality Audio and Dolby Atmos.

With its redesigned, smaller form and improved adhesive mount, Echo Auto offers greater placement freedom in your automobile. The device has five microphones integrated in to better pick up your requests over background noise from the air conditioner, music, and traffic.

Add Alexa to your car with Echo Auto to enjoy hands-free phone conversations, music streaming, and even roadside help when your car breaks down. You may reach an agent by telling Alexa to dial Roadside Assistance. You’ll only be charged for the services you actually use, such as when you have a flat tyre or run out of gas.

Komila Singhhttp://www.gadgetbridge.com
Komila is one of the most spirited tech writers at Gadget Bridge. Always up for a new challenge, she is an expert at dissecting technology and getting to its core. She loves to tinker with new mobile phones, tablets and headphones.
Facebook
Twitter
WhatsApp
Linkedin
ReddIt
Email
Previous article
Best smartphone offers available during Amazon Great Indian Festival 2022
Next article
Amazon Quiz Answers Today 30 September 2022: Participate to win Rs 1,250