Announced: Samsung Galaxy M31s with a 6,000mAh Battery to Launch in India on July 30 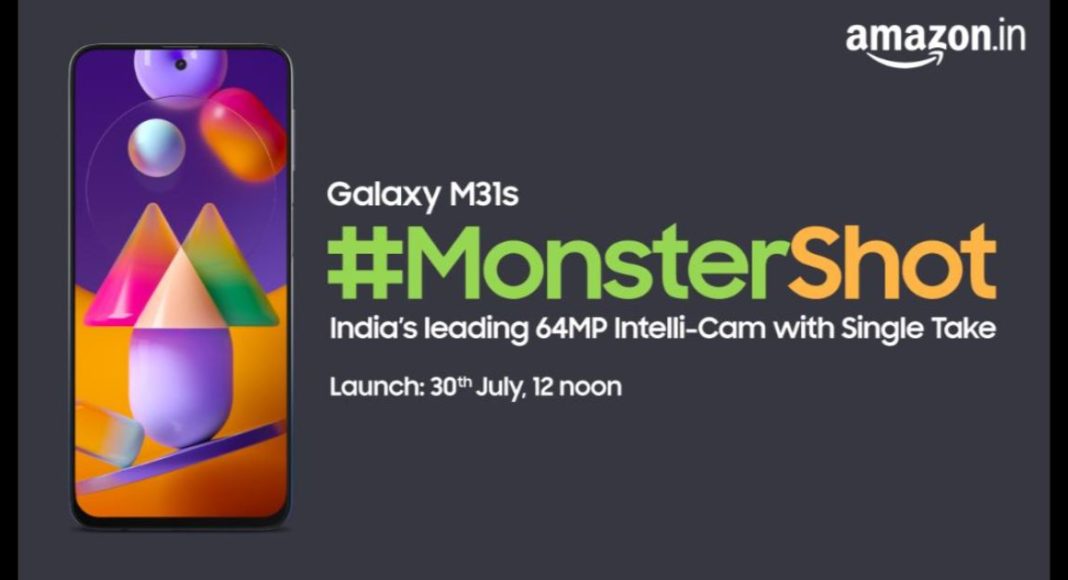 Samsung today has announced that soon a new smartphone from its popular and affordable M-series would be reaching the Indian shores. News is rife, the South Korean smartphone company has released a new official poster across all its social media channels to announce the arrival of Samsung Galaxy M31s in the country. The device is scheduled to launch in India on July 30.

The company has also created a microsite on Amazon for Samsung Galaxy M31s teasing its availability. According to the site, the device will be launching on July 30 at 12 noon in India. The microsite has also highlighted some of the key specs of the upcoming device that includes a quad rear camera setup that includes a 64-megapixel primary camera.

The camera set up of the Samsung Galaxy M31s will be supported by the company’s Single Take feature letting the users take several pictures as well as videos in just a click. Moreover, there will be a 6,000mAh battery with support for 25W fast charging with reverse charging support. There will be an FHD+ AMOLED display with a hole punch housing a selfie camera. M31s is being posed in a dual shade finish of white and blue.

The Notify button is also live now to get notified for the latest updates on the phone. To recall the device is the upgraded variant of Galaxy M31 which landed in the market in February this year. A recent report suggests that the device is expected to go on sale via Amazon India website on August 6. Most likely it is to be priced Rs 20,000 for the base 6GB RAM with 128GB of storage variant.

As far as the specifications of Galaxy M31s is concerned, it is to come with Samsung Exynos 9611 chipset with 6GB of RAM option as stated by a Geekbench listing. Moreover, the benchmarking site also revealed the device with model number SM-M317F.

In addition to this TUV Rheinland listing suggested that the smartphone is expected to pack a 6,000mAh battery along with 128GB storage, an AMOLED display and a quad rear camera set up with a 64-megapixel primary sensor. Out of which the majority of features match up with the company’s official details. As of now we only have these details only for more information to stay tuned to Gadget Bridge as the company will be opening up more as the launch date comes closer.

Komila Singhhttp://www.gadgetbridge.com
Komila is one of the most spirited tech writers at Gadget Bridge. Always up for a new challenge, she is an expert at dissecting technology and getting to its core. She loves to tinker with new mobile phones, tablets and headphones.
Facebook
Twitter
WhatsApp
Linkedin
ReddIt
Email
Previous article
Whirlpool fully automatic top load washing machines with built-in water heater launched in India
Next article
Emirates Mars Mission: UAE’s Hope Probe lifts off from Japan