Here's what you can't use your Apple Watch as a walkie talkie for sometime.

Cupertino-based technology giant Apple had introduced a unique feature in the watchOS 5 that allowed Apple Watch users to use it as a walkie-talkie with a dedicated app. Now, the company has disabled the Walkie-Talkie app because of a vulnerability that enabled malicious parties to eavesdrop on other people via an iPhone and listen to their conversations.

The vulnerability came to light via Apple‘s own platform using which people can report various security issues. However, the company has not given out any details on how the vulnerability could have been exploited. But then it has disabled the app until the required steps are taken to fix it.

According to a report by technology news website TechCrunch, Apple was made aware about the vulnerability via the company’s own official portal for reporting vulnerabilities. As soon as the security flaw was confirmed, Apple shut down the functionality of the Walkie-Talkie app to ensure that the flaw does not get exploited. According to Apple, till now, there have been no reports that say that the vulnerability in the app was exploited.

Speaking on the issue, Apple said, “We were just made aware of a vulnerability related to the Walkie-Talkie app on the Apple Watch and have disabled the function as we quickly fix the issue.” The Cupertino-based technology giant added that to exploit the Walkie-Talkie app, one needs very specific conditions and an entire sequence of steps needs to be executed for an individual to eavesdrop on another user via their iPhone.

Apple further said, “We concluded that disabling the app was the right course of action as this bug could allow someone to listen through another customer’s iPhone without consent. 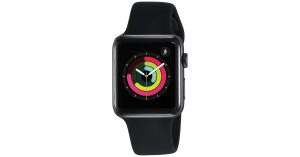 We should mention that this is not the first time when such a security issue has come to light in an Apple device. A few months back, a vulnerability was found because of which other users could eavesdrop on people FaceTime calls. Apple had taken a similar step then and disabled the affected functions till it rolled out a fix.