This iPhone is likely to house the quad-camera set up. 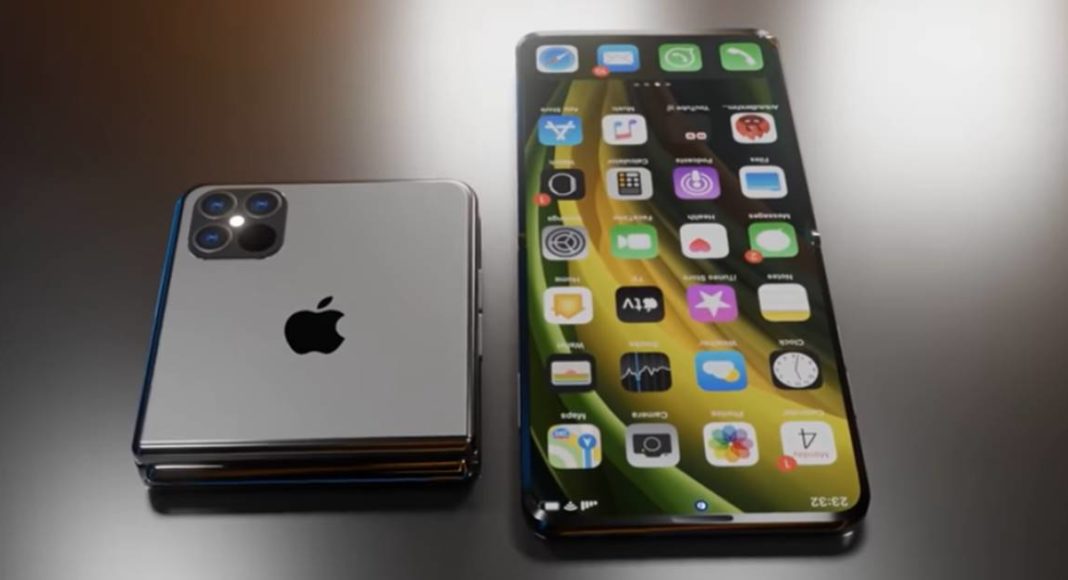 In order to take on Samsung Galaxy Z Flip, rumour mills hinted that Apple is prepping up to introduce a foldable iPhone. And now, a concept design by iOS Beta News has showcased ‘an iPhone 12 Flip’ with an innovative flip display. Mind you! This video of what is being dubbed as Apple iPhone 12 Flip was shared via Concepts iPhone YouTube channel.

If we believe this concept video to be true, Apple’s iPhone 12 Flip’ is likely to be equipped with a quad rear-camera module comprising of an LED flash that we get to see on the iPhone 11 Pro Max.

As far as the design is concerned, this much-anticipated handset has metallic curved edges along with a glass back as well as a screen display which is flat. Besides this main screen, the iPhone 12 Flip also has another display screen placed on the outer half of this device that showcases details like battery percentage, time, and much more.

Moreover, we get to see a punch-hole camera located at the top-center of the front panel. On the left and right sides, the concept design showcases that volume and start buttons are placed respectively. While the audio speaker is shown existing on the top bezel of this iPhone, dual microphones could be seen at the bottom end. Apart from these details, there is no revelation about the battery, processor and other important information.

In addition to this Apple iPhone 12 Flip, new is rife that the Cupertino-based tech giant may be working on its own cloud game streaming service. This news came after Patently Apple spotted a new patent titled “Enabling Interactive Service for Cloud Rendering Gaming in 5G Systems” that was filed in February this year but has been published now for the public.

According to Patently Apple, the filing stated that “One potential use case for network controlled interactive service in fifth-generation (5G) wireless communication networks is cloud rendering game. Cloud gaming, (also known as gaming on demand) is a type of online gaming that allows direct and on-demand video streaming of games onto different computing devices through the use of a thin client.”

Furthermore, it was revealed that the game is stored, executed, and rendered on a remote server and the video results are streamed directly to the computing device. This enables users to access games without regard to the capability of the user’s computing device, as the remote server is responsible for storing, executing, and rendering the game. Besides this, the controls and button-presses from the user’s computing device are transmitted to the server where they are recorded. This is followed by sending the response of the game to the input controls by the server.