Apple Music is now available on Amazon Alexa in India 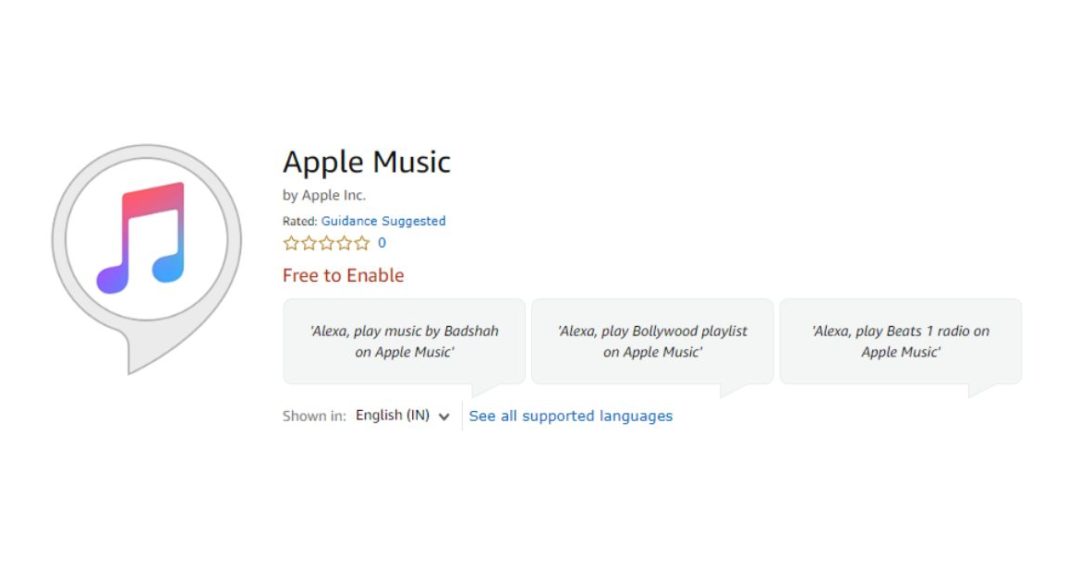 Amazon launched its voice assistant service Alexa two years ago. Yesterday the company announced that Alexa will not only interact in English but in Hindi too. The new Hindi experience is now available on all the Echo series of voice controlled smart speakers. Today the company announced that now Apple Music is available on Alexa voice assistant service. Those who are the subscribers of Apple Music will be able to sync their accounts and play their favourite songs on their voice enabled Alexa devices.

Now Apple Music is also offered on the full range of Echo devices. The users can ask Alexa to play their much loved track from 50 million songs. Apart from that, they can also play Apple’s curated playlists as well as expert-made radio stations centered on popular local genres like Bollywood, Tamil, Telugu, Punjabi and even music from around the world.

With a simple voice command to Alexa, consumers of all Amazon Echo devices such as Echo Dot, Echo Show 5, Echo, Echo Spot, Echo Plus, Echo Show and Echo Input can enjoy Apple Music.
To enable the Apple Music skill, iPhone users are recommended to update to iOS 13 and also update the latest version of the Alexa app.

Also, with Alexa Voice Assistant Service in Hindi, it is now easy to play it on a variety of smart speakers such as by Bose that includes Home Speaker 500, Portable Home Speaker, Home Speaker 450 and Home Speaker 300. Other brands like Motorola, MyBox, Boat, Portronics, Fingers, Sony, iBall and Dish will also make the Hindi service enabled soon.

Komila Singhhttp://www.gadgetbridge.com
Komila is one of the most spirited tech writers at Gadget Bridge. Always up for a new challenge, she is an expert at dissecting technology and getting to its core. She loves to tinker with new mobile phones, tablets and headphones.
Facebook
Twitter
WhatsApp
Linkedin
ReddIt
Email
Previous articleCompare: Huawei Mate 30 Pro vs iPhone 11 Pro Max vs Samsung Galaxy Note 10+
Next articleVivo V17 Pro with 32-megapixel dual elevating selfie cameras to launch today in India