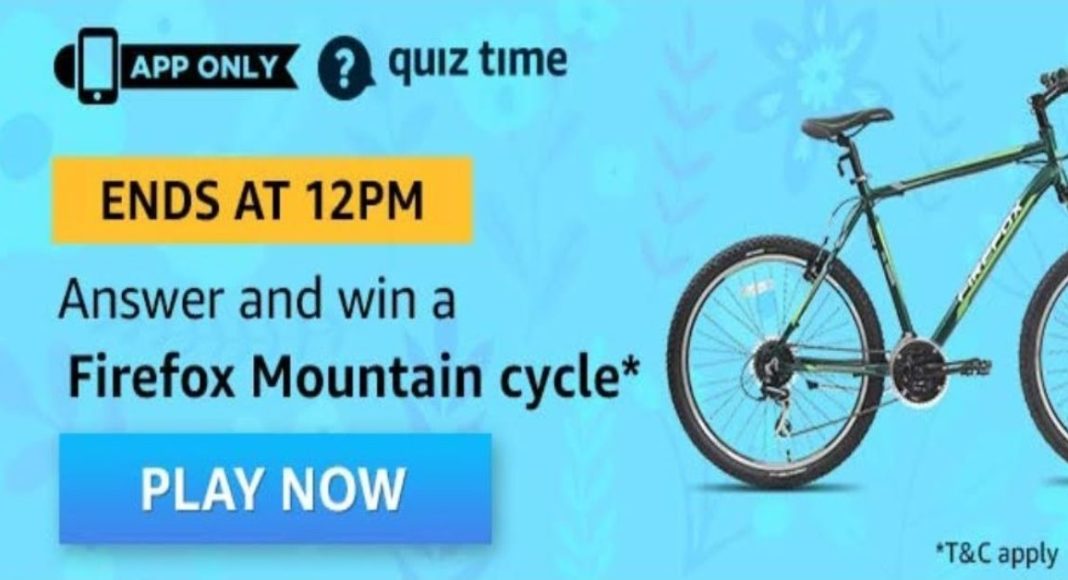 Every day Amazon India brings a daily quiz for its customers to win exciting new prizes every day on its platform. The Amazon Quiz can be played daily from 8 AM to 12 noon. Today you Win Firefox Mountain cycle if you managed to answer all the questions correctly. Daily a new set of questions is presented in front of the participants that gives millions of people across the country to win exciting prizes.

The Amazon Quiz has gone live on its mobile platform. The participants have to answer 5 questions that are based on general knowledge and current affairs. After clearing the daily quiz their name will be shortlisted for a lucky draw to select a winner. Amazon announces the results of the lucky draw at the end of the month. So today’s Quiz winner’s name will be announced on April 30.

By participating in Amazon Quiz every day you can stand a chance to win prizes such as iPhone X, iPhone Xs, Seagate HDD, GoPro Hero 8 Camera, LG Smartphones, Samsung Galaxy S20, Air Purifier, Oppo smartphones, Amazon Pay Balance among others. The Amazon Quiz is hosted by the app users only, it is not available for desktop users. So before participating just make sure you have downloaded the Amazon App. The lucky users might win something by answering all the questions correctly. Check out today’s answers for the Amazon quiz.

Question 1: Using the new ‘Crew Dragon’ spacecraft which organisation announced plans to send 3 tourists to the International Space Station in 2021?

The Answer is- SpaceX

The Answer is- Manohar Parrikar

Question 3: Ignaz Semmelweis, a 19th-century obstetrician, is now widely credited with discovering the medical importance of which of the following?

The Answer is- Hand Washing

Question 4: Shaheed Diwas is observed on March 23rd to honour the day when Rajguru, Sukhdev Thapar and ________ attained martyrdom? (Fill in the blank)

The Answer is- Bhagat Singh

Question 5: Which of these upcoming movies starring Akshay Kumar, is a remake of the famous Tamil horror movie Kanchana?

The Answer is- Laxmmi Bomb

How to play Amazon Quiz?

Komila Singhhttp://www.gadgetbridge.com
Komila is one of the most spirited tech writers at Gadget Bridge. Always up for a new challenge, she is an expert at dissecting technology and getting to its core. She loves to tinker with new mobile phones, tablets and headphones.
Facebook
Twitter
WhatsApp
Linkedin
ReddIt
Email
Previous articleApril 2 Amazon Quiz: Answer all the five questions to win Rs 20,000 Amazon Pay Balance
Next articleAsus introduced ROG Zephyrus Duo 15 gaming laptop with the latest Intel 10th Gen Core i9 and Nvidia GeForce RTX 2080 Super GPU in India