The company has also introduced a new lineup of gaming laptops and desktops from the ROG Strix SCAR and ROG Strix G series. 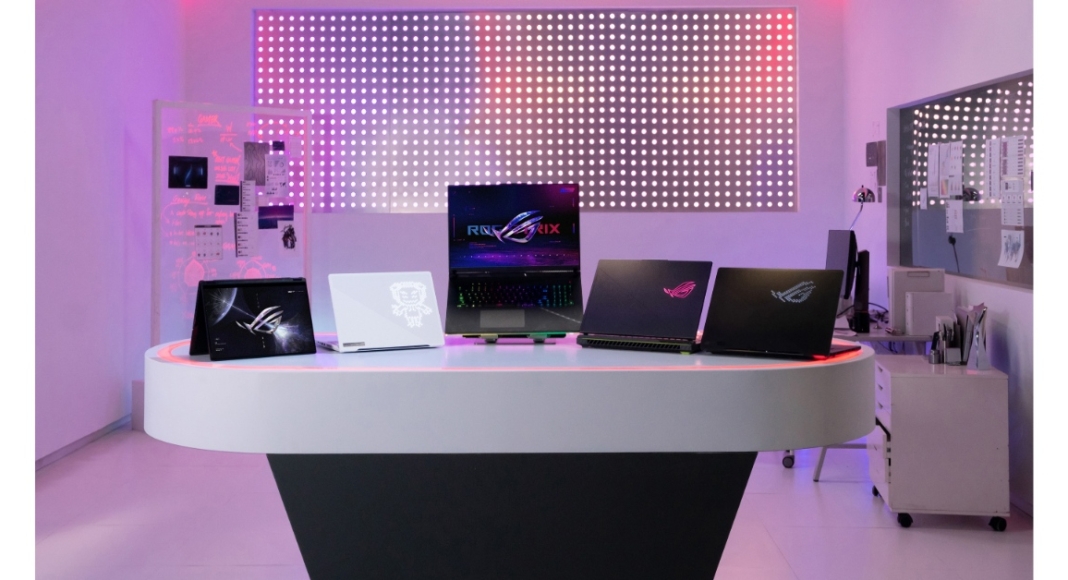 The Strix SCAR lineup supports the larger 16-inch and 18-inch 16:10 aspect-ratio screens, the Strix SCAR 16 and 18 have been rebranded. They have been fitted with ROG’s revolutionary QHD, 240Hz Nebula HDR display with Mini LED technology. The Asus ROG Strix SCAR 18 has an 18-inch display with 2,560×1,660 quad-HD+ resolution and a 240Hz refresh rate.

The top-of-the-line 13th Gen Intel Core i9 13980HX processor is included in the Strix SCAR 16 and 18. Maximum performance is achieved by using A Nvidia GeForce RTX 4090 GPU, up to 64 GB of DDR5, and up to 2 TB of PCIe 4.0 SSD storage are also included, which has thermal headroom to enable silicon to boost higher and longer than ever. The 13th Gen Intel Core i9 13980HX processor included in the new Strix G16 and Strix G18 is configured with up to an NVIDIA GeForce RTX 4080 Laptop GPU to provide great esports performance.

The Strix G17 and Strix SCAR 17 have both been updated with AMD’s Ryzen Zen 4 processor because it is an absolute beast for gaming and content creation alike with up to 16 full-performance cores.

The 2023 Zephyrus M16 to operate at 25 watts more than the model from the previous year, giving the Intel Core i9 13900H CPU and NVIDIA GeForce RTX 4090 Laptop GPU in this top gaming PC even more power through the use of a MUX Switch and NVIDIA Advanced Optimus. Additionally, the 2023 Zephyrus M16 is the first 16-inch device to have ROG’s renowned AniMe Matrix LED lighting array, enabling gamers to express their originality and creativity wherever they are.

The M16’s display has also been improved to a 16-inch, QHD Nebula HDR Display with Mini-LED technology with 1100 nits of peak brightness for an HDR image, 1,024 dimming zones and a 240 Hz refresh rate and 100% DCI-P3 coverage.

The Zephyrus Duo 16 consists of a 16-inch Mini LED panel and a 4K touchscreen that glides to meet it automatically when the laptop is unlocked. The Duo 16 is equipped with an AMD Ryzen Zen 4 processor with 16 cores and an NVIDIA GeForce RTX 4090 Laptop GPU with a MUX Switch this year.

The 2023 Flow X13 now offers up to an AMD Ryzen 4 processor and up to an NVIDIA GeForce RTX 4070 Laptop GPU. The Flow X13 has up to 32 GB of extremely fast LPDDR5 RAM, which additionally boasts a 50% higher data rate than the model from the previous year. In addition to this, the battery capacity has been increased from 62 to 75 Wh. The machine is easy to unlock and navigate thanks to a bigger touchpad and an FHD IR camera with Windows Hello functionality. With the revolutionary touchscreen QHD, 165 Hz Nebula Display on a 360° hinge of the Flow X13, this amazing convertible tablet is prepared to game anywhere, at any time.

This year, the Flow Z13’s GPU was upgraded to an NVIDIA GeForce RTX 4060 Laptop GPU, which has a TGP of up to 65 W and is a 62% improvement over the Z13’s predecessor. Additionally, the Z13 features a dedicated MUX Switch that supports NVIDIA Advanced Optimus. This is made possible by liquid metal and vapour chamber technology, and the amazing 13-inch QHD 165 Hz refresh rate Nebula Display will truly highlight gamers’ favourite content.

A new Intel Core i9 13900H processor and an NVIDIA GeForce RTX 4070 Laptop GPU with a MUX Switch and NVIDIA Advanced Optimus are now available for the ROG Flow X16. With 1100 nits of peak brightness and a scorching 240 Hz refresh rate, the Nebula HDR Mini LED touchscreen display has been enhanced.

The brand-new XG Mobile has been added to the 2023 Flow family with the NVIDIA GeForce RTX 4090 Laptop GPU and a maximum TGP of 150 W. The compact XG Mobile, in contrast to other external graphics solutions.

Komila Singhhttp://www.gadgetbridge.com
Komila is one of the most spirited tech writers at Gadget Bridge. Always up for a new challenge, she is an expert at dissecting technology and getting to its core. She loves to tinker with new mobile phones, tablets and headphones.
Facebook
Twitter
WhatsApp
Linkedin
ReddIt
Email
Previous article
Garena Free Fire Redeem Codes Today 6 January 2023: Here is how to claim them
Next article
Top 4 Easy Methods to Find Out Which Chromebook Model You Own