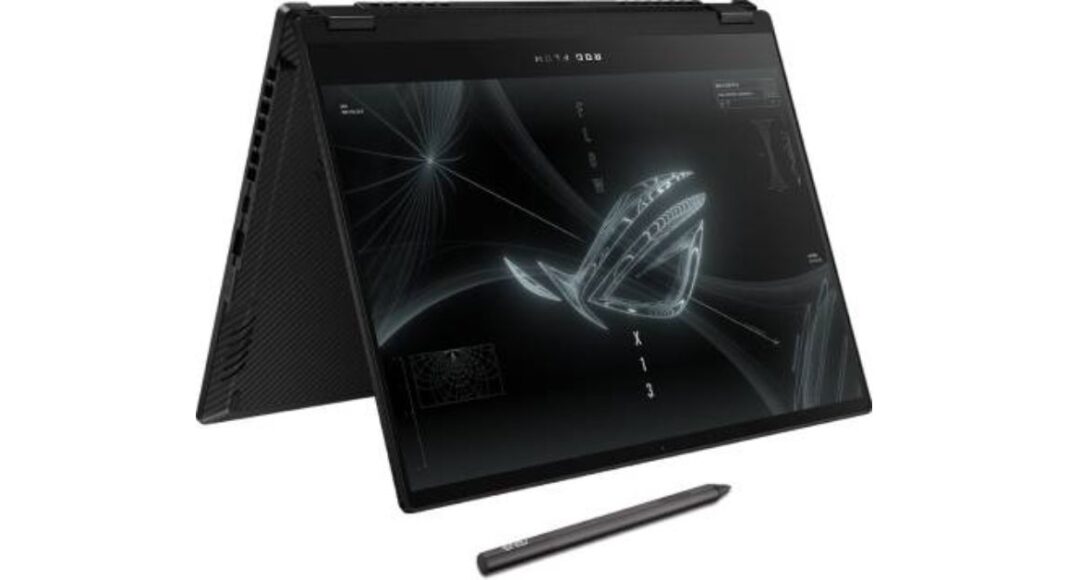 Asus ROG Flow X13 is the most premium of the four devices. It features a 360-degree Ergolift hinge with a touchscreen 13.4-inch UHD IPS display. It comes with a 120Hz refresh rate, 16:10 aspect ratio along with Gorilla glass protection. The AMD Ryzen 9 5900HS and AMD Ryzen 7 5800HS processors have been paired with Nvidia GeForce GTX 1650 GPUs offering up to 16GB of RAM and up to 1TB SSD storage.

This 2-in-1 laptop can be tilted 13 degrees for comfortable viewing. In addition to this, there is a white backlit keyboard along with an HD 720p camera on the front for video calling. The laptop comes with the built-in ROG ScreenPad Plus secondary display making multitasking easy and features optimized apps that enhance your workflow. The device is backed by a 62Whr battery. It also includes a ROG XG Mobile interface, USB Type-A port, two USB Type-C port, an audio combo jack, and an HDMI 2.0 port for connectivity.

The Asus ROG Zephyrus Duo 15 SE features a 15-inch main display and a  14.09-inch UHD secondary touchscreen display. The primary one offers a 300Hz refresh rate while the secondary 60Hz refresh rate. Under the chassis, there is AMD Ryzen 9 5900HX processor with 32GB RAM and 1TB SSD as well as Nvidia GeForce RTX 3080 GPU for graphics. In addition to this there is a 90Whr battery onboard and further includes three USB Type-A ports, USB Type-C port, HDMI 2.0 port, microSD card, audio combo jack, and an RJ45 port for connectivity. 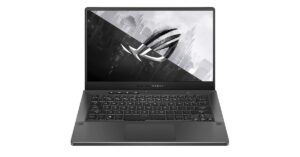 The 2021 model of Asus ROG Zephyrus G14 has been upgraded with a 14-inch WQHD IPS display having 2,560×1,440 pixels of resolution. The device is powered by AMD Ryzen 9 5900HS and AMD Ryzen 7 5800 HS processors with up to 16GB RAM, and up to 2TB SSD. It also comes integrated with an Nvidia RTX 3060 GPU for graphics and a backlit keyboard with a power button that doubles as a fingerprint sensor. In terms of connectivity, there is a USB Type-C port, two USB Type-A ports, an HDMI 2.0, an audio combo jack, and a Kensington Lock. The computer houses a 76Whr battery and an ErgoLift hinge that tilts the keyboard at a more comfortable angle, enhancing cooling.

In addition to the backlit keyboard, there is an inbuilt fingerprint sensor. There is a 180-degree ErgoLift hinge that opens up more viewing angles and a 90Whr battery. On the connectivity front, there is Wi-Fi 6. Ports include two USB Type-A ports, two USB Type-C ports, microSD card slot, HDMI 2.0 port, 3.5mm audio combo jack, Kensington lock, and an RJ45 port.

Komila Singhhttp://www.gadgetbridge.com
Komila is one of the most spirited tech writers at Gadget Bridge. Always up for a new challenge, she is an expert at dissecting technology and getting to its core. She loves to tinker with new mobile phones, tablets and headphones.
Facebook
Twitter
WhatsApp
Linkedin
ReddIt
Email
Previous articleSony ECM-W2BT wireless microphone and ECM-LV1 compact stereo lavalier microphone launched in India
Next articleMay 27 Amazon Quiz: Today you can win Rs 15,000 Amazon Pay Balance