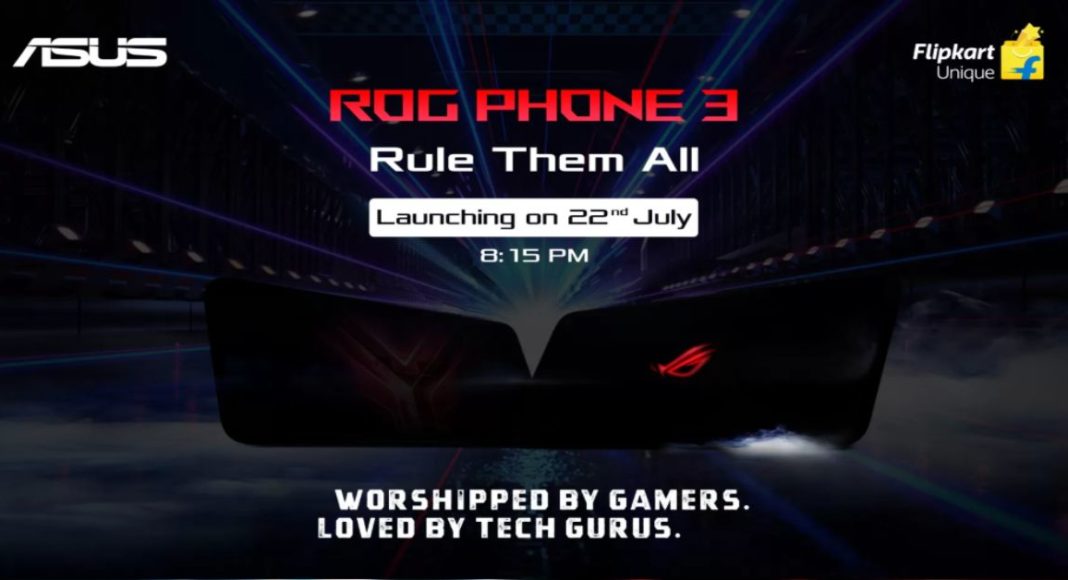 Earlier this month, the Taiwanese electronics brand Asus announced that it will be hosting the ‘Game Changer’ event on July 22nd in Taiwan to unveil its next gaming smartphone ROG Phone 3. Now the company is teasing the third generation of its ROG Phone in India via Flipkart. This clearly indicates that the phone will be exclusively available through the e-commerce website. Also, the device will also make its debut in India on the same day as the global launch that will take place on July 22.

The Asus ROG Phone 3 global launch is scheduled for July 22 in India that will kick off at 8.15 PM IST. Due to the coronavirus pandemic, there won’t be a physical launch, instead, it will be streamed live on its official YouTube channel and across all its social media channels. In addition to this, the company has also shared a short teaser video via its Twitter handle confirming the Qualcomm Snapdragon 865+ processor for the upcoming gaming phone. Interestingly this time the company has chosen Indian YouTuber CarryMinati as its new face to endorse ROG Phone 3.

Gamers, buckle up. The Ultimate Gaming Weapon is coming with super hot upgrades, to transform you into Gaming Gods! Watch @CarryMinati declare his admiration for the #ROGPhone3, that is the world’s first smartphone to be powered by the @qualcomm_in Snapdragon 865 Plus! pic.twitter.com/HY4rxVqGsO

Notably, the Qualcomm Snapdragon 865+ processor is the up-to-the-minute chipset that the American company has just launched in the market to deliver increased performance, faster gameplay ultra-intuitive AI, game-changing Wi-Fi, and a full suite of Qualcomm Snapdragon Elite Gaming features.

Coming back to Asus ROG Phone 3, its latest teasers the company has only revealed that the just-launched Qualcomm Snapdragon 865+ is going to make its debut with the launch of the gaming device. The TENAA listing suggests the smartphone will be featuring a 6.9-inch AMOLED display with 1,080×2,340 pixels of resolution. In addition to this the handset will be offered in three variants of 8GB RAM with 128GB of storage, 16GB of RAM with 256GB of storage option and 16GB of RAM with 512GB of internal storage.

Moreover, there will be a triple rear camera on the ROG Phone 3 consisting of a 64-megapixel primary sensor, a secondary 13-megapixel sensor and the resolution of the tertiary lens is not known but it is expected to be a telephoto lens with 8x zoom support. The device is likely to house a 6,000mAh battery with fast charging support along with a dual USB Type-C port on the smartphone.

Komila Singhhttp://www.gadgetbridge.com
Komila is one of the most spirited tech writers at Gadget Bridge. Always up for a new challenge, she is an expert at dissecting technology and getting to its core. She loves to tinker with new mobile phones, tablets and headphones.
Facebook
Twitter
WhatsApp
Linkedin
ReddIt
Email
Previous article
Qualcomm Snapdragon 865 Plus 5G Mobile Platform unveiled for superior gameplay
Next article
iQoo Z1x smartphone with Snapdragon 765G SoC goes official: Price and tech specs