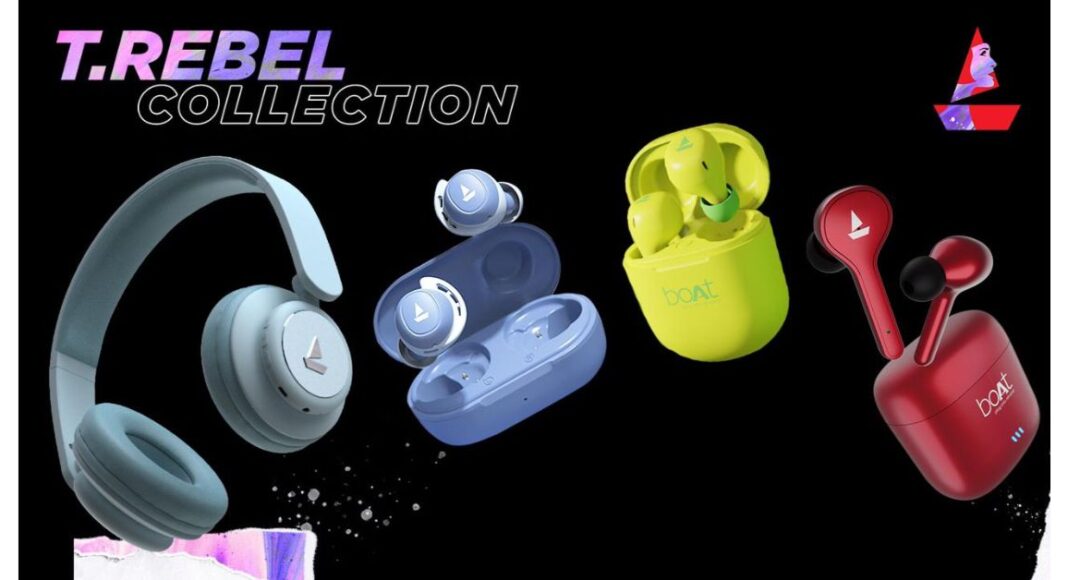 The popular audio brand Boat has announced the launch of its new range of headphones and earphones. These are specifically designed for women in India. The company aims to offer a superior listening and viewing experience to its customer base in the country.  They come with a pocket-friendly price tag and the same goes with the newly launched Boat TRebel. The new lineup includes both wired and wireless headsets including the TWS earphones. The range includes Airdopes earphones, Basshead wired earphones and Rockerz headphones. All the devices will be available in distinct colour options with artistic designs.

The biggest USP of the Boat TRebel range of headphones and earphones is its artistic designs and colour scheme, positioned towards Indian women. According to the company, the collection personifies the characteristics of a strong independent woman who is reinventing the societal playbook to go big in all walks of life. Designed in-house by boAt, the new range has a fresh palette of Blue, Lime, Red, Yellow, and Pink.

In addition to this, the company has also partnered with Universal Music India to release the ‘TRebel’ campaign with a poignant all-woman collaborative song titled ‘I’m A Rebel’.

The Rockerz 450 is offered in two colour options of Blue and Beige and the company has set the price at Rs 1,499. The Airdopes 131 while the Airdopes 171 are priced at Rs 1,299 and Rs 1,799 respectively. The former one will be available in Blue, Cherry colour options while the latter one in Blue and Gold.

The TRebel Airdopes 131 are basically wireless earbuds for girls. It offers 12 hours of non-stop playback along with Insta Wake n Pair technology. These earbuds can be connected to your device with Bluetooth VT5.0. These also feature extra super bass with 13mm drivers. The device comes with instant voice assistant support from Siri and Google.

The Airdopes 402 comes with a 450mAH battery charging case and it is touted to provide up to 16 hours of music playback. The TWS earphones are IPX4 rated for sweat and water resistance. In addition to this, there are 10mm audio drivers ion each earbud along with an ergonomic finish.

The Airdopes 431 are rated for IPX4 making them resistant to sweat and water. Each earbud includes a 7mm driver with effective noise cancelling feature to shut out the unnecessary sound. These come with a playback time of 3.5 hours per charge along with an extended playback time of 10 hours. On the other hand, the Airdopes 381 also equips 7mm dynamic drivers on each earbud comes with a 50mAh battery that delivers 4  hours of playback on a single charge and 24 hours of standby time. It comes with a stylish and handy carry case along with a 500mAH battery. The earbuds are IPX5 rated for sweat and rain resistant.

The Airdopes 441 Pro and Airdopes 171 comes with a more compact form factor. The former one comes in a dual shade while the latter one is offered in pastel shades.

Komila Singhhttp://www.gadgetbridge.com
Komila is one of the most spirited tech writers at Gadget Bridge. Always up for a new challenge, she is an expert at dissecting technology and getting to its core. She loves to tinker with new mobile phones, tablets and headphones.
Facebook
Twitter
WhatsApp
Linkedin
ReddIt
Email
Previous article
Best Android apps that help you fall asleep
Next article
LG OLED 48CX TV for the gaming enthusiasts launched in India