HomeOther TechAppsCan't see who sent you that message on WhatsApp via your smartphone's...

Can’t see who sent you that message on WhatsApp via your smartphone’s notification bar? Here’s why

There are benefits of being a part of WhatsApp beta program, and there are cons too. The key advantage of being a part of WhatsApp’s beta program is that you get to try out the new features of the app before anyone else does. However, on the downside, not all updates that you get are bug-free. These bugs usually just make WhatsApp behave in ways that are out of the ordinary, till the company releases a fix for them.

We have signed up for the beta version of the Android app since we like to keep ourselves updated with the latest features. And this time, we have come across a strange bug on the app that it making contact names not appear on the notification bar each time you get a message.

Even expanding the notification bar does not help as it only shows the contacts’ images on the notification panel alongside their message, but their name is still not visible. So if two people without WhatsApp display pictures send you messages at the same time, you would have to go online to check who sent it. The bug is present on WhatsApp beta version 2.19.93.

We have to admit that this is not a major bug and at the most, it will only cause a minor annoyance. The ability to see who sent you a message on WhatsApp along with a small glimpse at the text only saves some time for the users as they can look and decide whether they want to reply to the message now or would they rather do it at a later time. However, with this bug, one would have to open the app each time they get a message as there is no way of finding out who sent it. 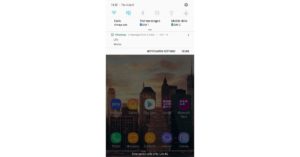 Till now, there is no word from WhatsApp acknowledging this bug, so we don’t know by when a fix for the issue will be available. However, there is a small solution that may help you if you are encountering this problem on your device. You can add a WhatsApp widget on your smartphone’s home screen so that you are able to see who is messaging you and exactly what the text is. 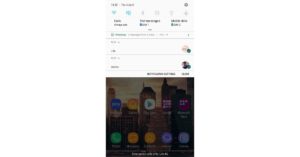 To get the WhatsApp widget on your smartphone‘s home screen, just long press on it, and select the option of ‘Widgets’. On doing this, you would see a number of widgets of the apps that you have on your handset in the form of a list. Pick WhatsApp’s widget and select the size ‘4 x 2’. You can further enlarge it on your smartphone’s screen if you want to. This will give you a look at who has messaged you and what exactly they have written in the text. So till WhatsApp fixes this issue, you wouldn’t have to dive into the app each time you get a message.