HomeHow ToFacebook Messenger rolls out 'Remove for Everyone' feature: Here's how to use...

Facebook Messenger rolls out ‘Remove for Everyone’ feature: Here’s how to use it 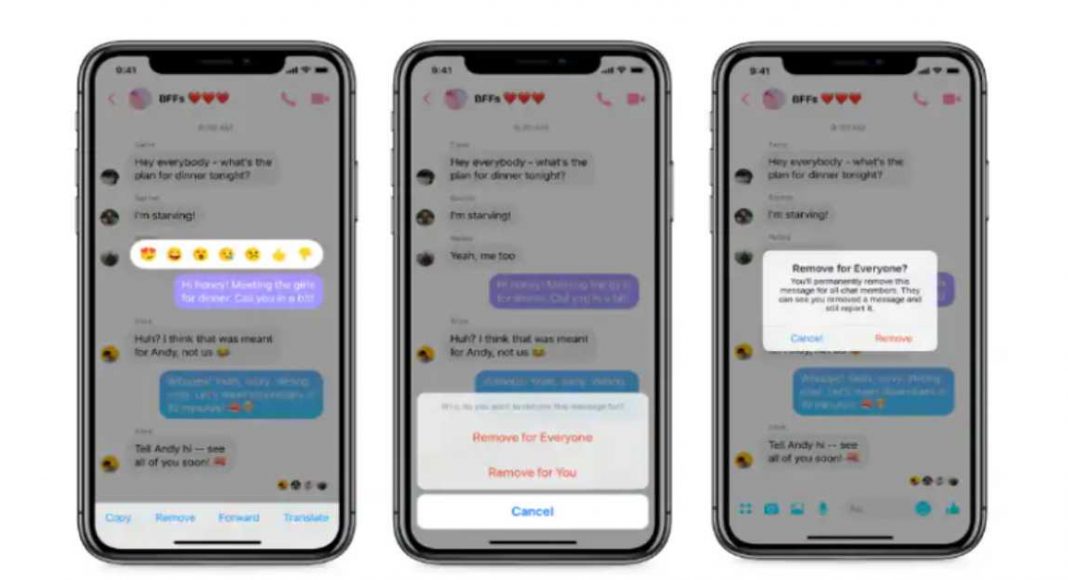 Last week, media reports suggested that Facebook is getting the unsend feature to its Messenger app. The social networking giant decided to take this step after it faced a lot of backlash after deleting CEO Mark Zuckerberg’s messages from several recipients’ inboxes earlier this year.

The very transparency of the platform was questioned. It was then that Facebook announced that it will get the ‘Unsend Message’ feature to its Messenger and make it available to all. And now, the feature has finally been rolled out in Facebook’s app.

The Unsend Message feature has started rolling out to both Android and iOS users in Poland, Bolivia, Colombia, and Lithuania. And according to a report in Techcrunch, a Facebook spokesperson has confirmed that the worldwide roll out will also be happening “as soon as possible”.

The feature is called ‘Remove for Everyone’ and it will enable users to delete any message or file they have sent in Messenger. However, they will only be able to do it within 10 minutes of sending it.

Here are the steps to use the new ‘Remove for Everyone’ feature on Facebook:

After this, your message will be replaced by a tombstone message saying ‘You removed a message’. This is similar to what happens on WhatsApp. However, you can only do it within 10 minutes of sending the message. And Facebook’s head of Messenger Stan Chudnovsky explained the deadline by saying, “We looked at how the existing delete functionality works. It turns out that when people are deleting messages because it’s a mistake or they sent something they didn’t want to send, it’s under a minute. We decided to extend it to 10, but decided we didn’t need to do more.”

He has also been quoted saying that the feature rolled out to common public isn’t the same as the one that is available to the executives of the company. It is also worth noticing that when Mark Zuckerberg’s messages were deleted from people’s account, the tombstone message indicating that a message was removed.

Avani Baggahttp://www.gadgetbridge.com
Avani has an immense love for reading, travelling and food, but not necessarily in the same order. Avani almost started pursuing law, but life had other (better) plans for her and she chose to be a writer instead (luckily!) She previously covered technology at Times Internet and wrote about smartphones, mobile apps and tech startups. When she’s not writing, you’ll be able to find her in book stores or catching up on her social life.
Facebook
Twitter
WhatsApp
Linkedin
ReddIt
Email
Previous articleGoogle’s new shortcut will change the way you use Google Docs: Here’s how you can use it
Next articleApple MacBook Air 2018 quietly starts selling in India: Price, specifications and more