The listing has now been removed 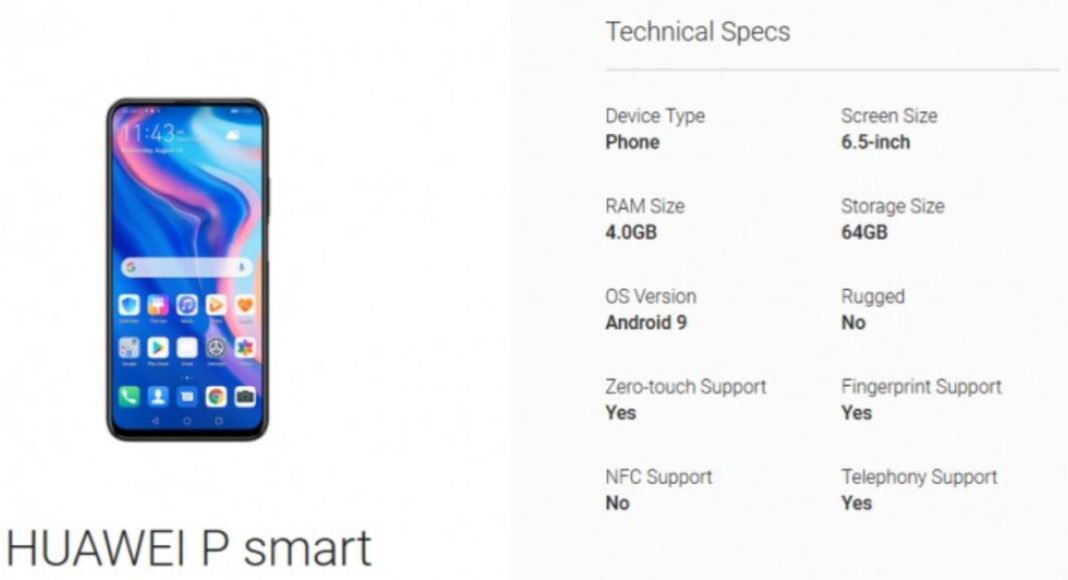 Out of the blue Google Enterprise leaked the new upcoming smartphone from Huawei. Android Enterprise Solutions Directory revealed the specifications and details of the Huawei P Smart Pro that is the successor of the Huawei P Smart. The P Smart was launched by the company in December last year. The key highlight of the smartphone includes a 6.5-inch display with 4GB RAM and will run on Android 9.0 Pie.

However, the listing that was accidentally published has now been removed. It reveals the front display of the Huawei P Smart Pro. As per the listing, the upcoming device will be featuring a 6.5-inch display and it may be sporting a Full HD+ resolution. Moreover, the phone will come with 4GB of RAM and 64GB internal storage.

The Huawei P smart Pro will run Android 9.0 Pie OS. On the other hand, it will also be featuring a fingerprint scanner as its security feature. However, it’snot confirmed that if the fingerprint sensor will be placed under the display or on the rear panel.

The image also reveals that the Huawei P Smart Pro will have no-notch full-screen display along with slim bezels and a thicker chin at the bottom. It is expected that the upcoming device will come equipped with a pop-up selfie camera. On the right side of the mobile phone, it will feature volume controls and power on/off buttons.

To recall, the Huawei P Smart features a 6.21-inches display along with 1080 x 2,340 pixels, 19.5:9 aspect ratio. It is powered by the Kirin 710, while on the other hand, the P Smart Pro will be getting fresh Kirin 810 CPU. P Smart runs on Android 9.0, too. It comes in 3GB RAM with 32/64GB of internal storage options that can be further expanded up to 1 TB via microSD card. The phone comes with a dual rear camera setup that has 13MP and 2MP sensors, which features an LED flash and is supported by HDR and panorama.

On the front, it has an 8MP selfie camera and on the rear, it has a fingerprint sensor for authentication. The phone houses a non-removable Li-Ion 3,400 mAh battery supported by 10w fast charging. The handset measures 155.2 x 73.4 x 8 mm and weighs 160 g.

Komila Singhhttp://www.gadgetbridge.com
Komila is one of the most spirited tech writers at Gadget Bridge. Always up for a new challenge, she is an expert at dissecting technology and getting to its core. She loves to tinker with new mobile phones, tablets and headphones.
Facebook
Twitter
WhatsApp
Linkedin
ReddIt
Email
Previous article
Xiaomi Mi A3 out of the blue gets listed Amazon prior to its launch: Price revealed
Next article
Samsung Galaxy Note 10, Samsung Galaxy Note 10+ set to launch today: How to watch the live stream