Google Pixel 4 may come with a telephoto lens, hints the company’s camera app

Google got everybody talking when it shared the design of its upcoming Pixel 4 flagship smartphone months ahead of its launch. The image shared by Google led to a lot of speculations and fans tried to predict as much as possible about the features of the device with it. In the image, it could be seen that Pixel 4 will come with a square camera module that will come with two sensors. However, there is no clarity on whether that will be a telephoto lens or a sensor meant for super-wide-angle shots.

But then, we may have got the answer to this question as a new version of the Google Camera app may have given away which sensor it is. According to XDA Developers, the build of the app in its leaked version of Android Q had references that mention ‘telephoto’. So, it is very likely that the Pixel 4 smartphone will come with a telephoto lens.

We should mention that Pixel smartphones can take some excellent portrait shots. Some even say that the handset’s edge detection is better than iPhone’s or other Android devices. But then, it is worth pointing out that since iPhones use depth data that has been obtained from two camera sensors, they can produce very realistic images that show the transition between the subject and their blurry background. The same cannot be said about Pixel devices that tend to show a stark contrast between the foreground and the background. Google will be able to work on this and make it better with a telephoto lens.

To recall, a few weeks back, Google had taken to its Twitter account and shared the image of its upcoming Pixel 4 smartphone. The tweet that accompanied the image read, “Well, since there seems to be some interest, here you go! Wait ’til you see what it can do. #Pixel4”

As we mentioned earlier, the tweet was followed by a number of speculations. For starters, it can be seen in the image that there is no fingerprint scanner, which means that the device is likely to sport one on its display. The most prominent change is, of course, the cameras of the device. Firstly, the handset will come with more than one camera sensor, and secondly, they will be placed in a square module on its back panel. 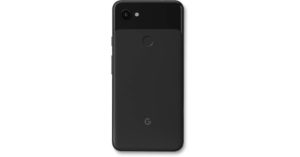 Another thing about the design of the Google Pixel 4 smartphone is that it’s back panel does not have the regular look that all other devices from the company’s flagship range do.

Pixel smartphones have always had a glossy glass portion on the top of their rear panel and a larger matte portion that on the rest of its back panel. Pixel 4, on the other hand, can be seen to have only one. But then, we can’t really say which one it is.