Google Pixel 4 has become the talk of the town off late.

Google Pixel 4 has become the talk of the town even months before its launch. The technology giant took a bold step and released its first image last month, even though the device will be unveiled officially in October. However, this has only made fans speculate more about the upcoming Pixel 4 and Pixel 4 XL smartphones. Now, a new set of images of the Google Pixel 4 have surfaced online and they show that the device will come with a large bezel on top of its screen.

The image has been leaked on Twitter by Ice universe (via 9to5Google) and they give a good look at the Pixel 4’s front panel. The pictures are in line with other reports of the device that have been pouring in. It can be seen that the upcoming flagship smartphone will come with a larger forehead and chin bezels than its rivals like Samsung Galaxy S10 Plus and OnePlus 7 Pro. We should mention that these bezels will cover up a variety of sensors and front-facing snappers that are otherwise hidden in a notch or a pop-up camera module.

The oval opening of the Pixel 4 Series front panel means that the Google Pixel 4 Series will be groundbreaking and new and worth looking forward to. pic.twitter.com/9Pg9bGcWrs

A report has also suggested that the handset will come with some motion-sensing technology that will be termed as Project Soli. This technology will make use of radar to detect fine motion above it. With the size of the bezels that can be seen in the images, it looks like Google required plenty of space to place the sensors.

Besides these images, @OnLeaks and iGeeksBlog have released a number of renders of the upcoming Google Pixel 4 smartphone and it is worth mentioning that they also show thicker top and bottom bezels.

When Google shared the first image of its upcoming smartphone last month, a number of things about it came to light. The upcoming Pixel 4’s official image revealed that the smartphone will come with a square camera bump on its back panel’s top left corner. Two camera sensors and an LED flash can be seen inside the camera module. Some reports have surfaced online that suggest that the second camera sensor on Google Pixel 4 will be a telephoto lens. 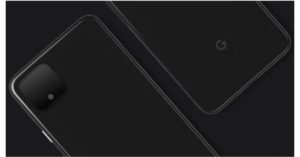 We should also point out that the smartphone does not sport a fingerprint sensor on its back panel. So, it can be concluded that the upcoming Pixel flagship will come with an in-display fingerprint sensor. The device can also be seen to sport a silver-coloured Power button on its side edge.

Another very notable thing about the design of the Google Pixel 4 is that it’s back panel is not like the rear panel of other Pixel devices. Other Pixel handsets come with a glossy glass portion on the top of their back panel and a matte portion lies right below it. However, Pixel 4 looks like it only has one among the two portions, although as of now, it can’t be said whether it will be matte or glass.

Avani Baggahttp://www.gadgetbridge.com
Avani has an immense love for reading, travelling and food, but not necessarily in the same order. Avani almost started pursuing law, but life had other (better) plans for her and she chose to be a writer instead (luckily!) She previously covered technology at Times Internet and wrote about smartphones, mobile apps and tech startups. When she’s not writing, you’ll be able to find her in book stores or catching up on her social life.
Facebook
Twitter
WhatsApp
Linkedin
ReddIt
Email
Previous articleOppo will soon launch an online e-store to give a boost to its sales
Next articleSony patents its first smartphone with folding display and pressure sensors: Report