Google Search gets a ‘Thanos’ Easter egg with the release of Avengers: Endgame film 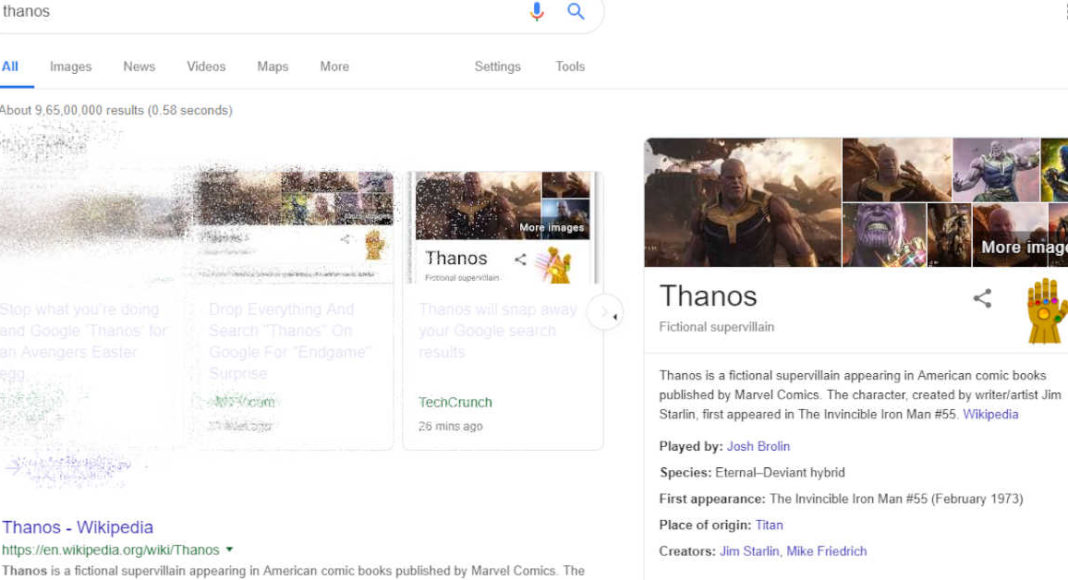 Avengers: Endgame one movie that all Marvel fans have been looking forward too. But today, their wait was finally over as the film has finally hit the cinemas in India. And technology giant Google also did its bit to keep up the excitement of their fans. Google has added an interesting Easter egg related to Thanos to its search.

The Easter egg is the latest among many that Google has put up on its platform lately, and this one directly creates excitement for the new movie. To see Google’s surprise for Marvel fans, just go to Google Search and type ‘Thanos’. Among the results, you will see an illustrated gauntlet, and if you are a Marvel fan, you would realise that this is basically the glove-like artefact that the series’ villain Thanos uses in Avengers: Infinity War to use the power of all the Infinity Stones at once.

If you click on the gauntlet, the Easter egg will be activated. The fingers of the gauntlet will snap and then various search results of the page will start disappearing. They would vaporise exactly as the people and superheroes did in Avengers: Infinity Wars.

Google will then show you that the number of search results has reduced exactly by half. This is another thing that completely relates to what happened in the previous movie by Marvel. It is also the theme that primarily dominates the plot of Avengers: Endgame.

Interestingly, if you click on the gauntlet one more time, it leads to a new animation. The Time Stone on the animation reverses the flow of time and all the search results that disappeared earlier get restored.

Avengers: Endgame has now been released in India and the film has managed to break all records for advance ticket bookings in the country. The movie’s star cast includes Chris Evans as Steve Rogers (Captain America), Robert Downey Jr as Tony Stark (Iron Man) and Chris Hemsworth as Thor. The role of Thanos is played by Josh Brolin.

It is worth adding that Google is not the only technology company which is doing its bit to keep up the excitement for the film. Chinese smartphone brand Oppo partnered with Marvel to launch an Avengers Edition of its F11 Pro handset. While the specifications of the device are the same as the regular variant of Oppo F11 Pro, the special edition smartphone comes with a new Avengers-inspired design.