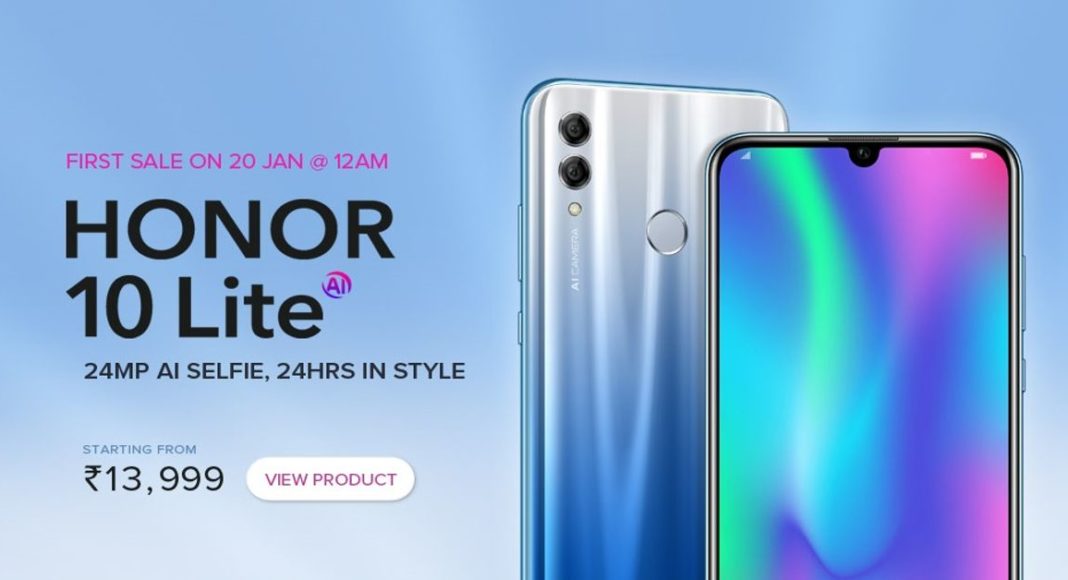 Huawei’s sub-brand Honor has today unveiled its Honor 10 Lite smartphone in India. It is worth noticing that the device was previously launched in China in November last year and in India, it will be available for purchase via Flipkart and Honor’s online shopping store.

Honor 10 Lite sports a 24MP selfie camera that comes with AI enhancements and is powered by HiSilicon Kirin 710 processor. The device runs android 9.0 Pie out-of-the-box and sports a ‘dewdrop’-shaped notch on its display.  Here are the pricing details and specifications of the newly launched device:

Honor 10 Lite mobile is available in 4GB and 6GB RAM options in India. While the former is priced at Rs 13,999, the latter bears a price tag of Rs 17,999. Both the variants can be bought in Midnight Black, Sapphire Blue and Sky Blue colour options. We should mention that among these, the Sky Blue coloured variant comes with a gradient finish on its back panel. The device can be picked up from either Flipkart or HiHonor India store starting 12 am on January 20. As a part of launch offers, Honor 10 Lite buyers will get a Jio cashback of Rs 2,200 and a Cleartrip voucher worth Rs 2,800.

Honor 10 Lite smartphone can hold dual nano-SIM cards and runs Android 9.0 Pie with EMUI 9.0 baked on top. The device features a 6.21-inch full-HD+ display which has a dewdrop-shaped notch on top, a pixel density of 415ppi and a screen-to-body ratio of 91%. Honor 10 Lite comes with a TUV-certified eye care mode which, according to the company, can reduce the blue light effect from the display and hence, decreases the strain on users’ eyes.

Honor 10 Lite smartphone is powered by a HiSilicon Kirin 710 processor clubbed with either 4GB or 6GB of RAM and a GPU Turbo 2.0 technology. The mobile phone has 64GB of internal storage and can hold a microSD card of up to 512GB.

For imaging duties, there is a 13MP primary camera that has an f/1.8 aperture and a 2MP secondary sensor. On the front panel, there is a 24MP front-facing snapper with an f/2.0 aperture that can be used to click selfies and video calls. The camera app of the newly-launched device has AI scene recognition that is claimed to recognise eight different scenes including sky, beach, plant, flower, snow, room, stage and night. The cameras are also said to have AI-based facial recognition. The smartphone houses a 3,400mAh battery and comes with 4G VoLTE, Wi-Fi, Bluetooth v4.2, 3.5mm audio jack, and GPS for connectivity.

Avani Baggahttp://www.gadgetbridge.com
Avani has an immense love for reading, travelling and food, but not necessarily in the same order. Avani almost started pursuing law, but life had other (better) plans for her and she chose to be a writer instead (luckily!) She previously covered technology at Times Internet and wrote about smartphones, mobile apps and tech startups. When she’s not writing, you’ll be able to find her in book stores or catching up on her social life.
Facebook
Twitter
WhatsApp
Linkedin
ReddIt
Email
Previous articleOnePlus is taking over Apple’s spotlight in India
Next articleNokia 9 PureView launch date delayed again