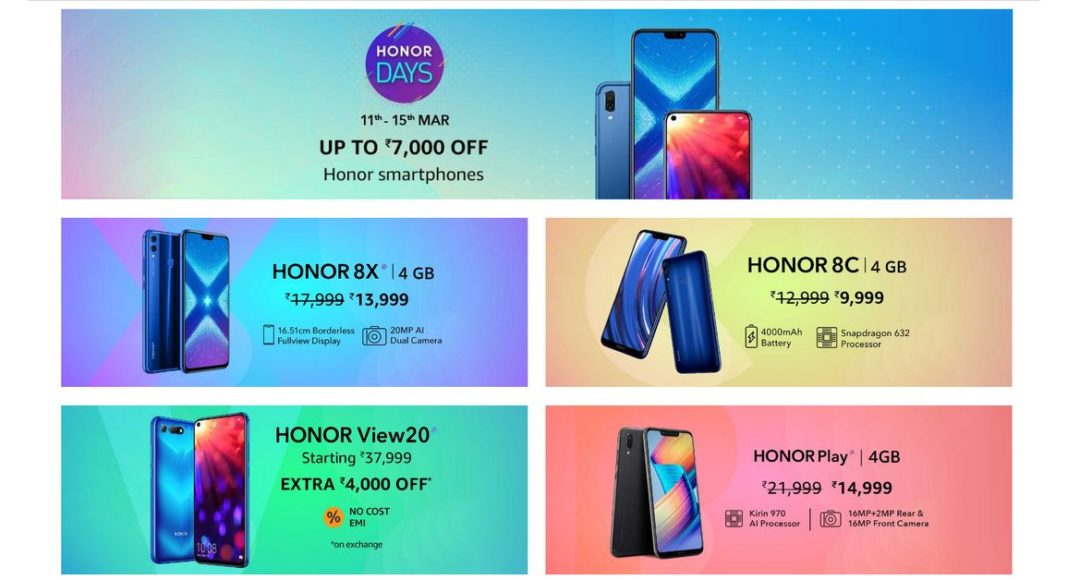 Chinese smartphone brand Honor is bringing back the Honor Days sale by collaborating with Amazon India. The sale will run from March 11 to March 15, and during these five-days, the company will be offering discounts on five of its smartphones — Honor 8X, Honor 8C, Honor Play, Honor 7C and the latest flagship smartphone Honor View20.

Also, Honor is rolling out Android Pie update with EMUI 9.0 for Honor 8X. The update will be rolled out in batches and it will go live from March 18. The update includes Android Pie along with performance improvements and the new EMUI 9.0. The update also brings AR scanning capability with image recognition for shopping. It is also bringing the reverse search of the device so that now the users can search for anything using a picture.

Coming back to the Honor Days sale, here are the offers you should know about:

The company’s flagship smartphone, Honor View 20 with 6GB RAM/128GB storage is available for Rs 37,999 while the 8GB RAM/256GB storage variant is available for Rs 45,999. Their original prices were Rs 42,999 and Rs 50,999 respectively. The customers will also get Rs 4,000 discount off on exchange of any smartphone on both the variants. Other offers include a 9 months no cost EMI and a 5% instant discount on Axis bank credit and debit cards.

All the smartphones mentioned above is additionally getting 5% instant discount on the use of Axis bank credit and debit card EMI from March 12 to March 15.

Aman Singhhttps://www.gadgetbridge.com/
Aman Kumar Singh has a Masters in Journalism and Mass Communication. He is a journalist, a photographer, a writer, a gamer, a movie addict and has a love for reading (everything). It’s his love of reading that has brought him knowledge in various fields including technology and gadgets. Talking about which, he loves to tweak and play with gadgets, new and old. And when he finds time, if he finds time, he can be seen playing video games or taking a new gadget for a test run.
Facebook
Twitter
WhatsApp
Linkedin
ReddIt
Email
Previous article
12 countries from where you can buy Apple iPhone XS and iPhone XS Max cheaper than India
Next article
Vivo S1 to sport a triple rear camera setup: Here are more leaked details