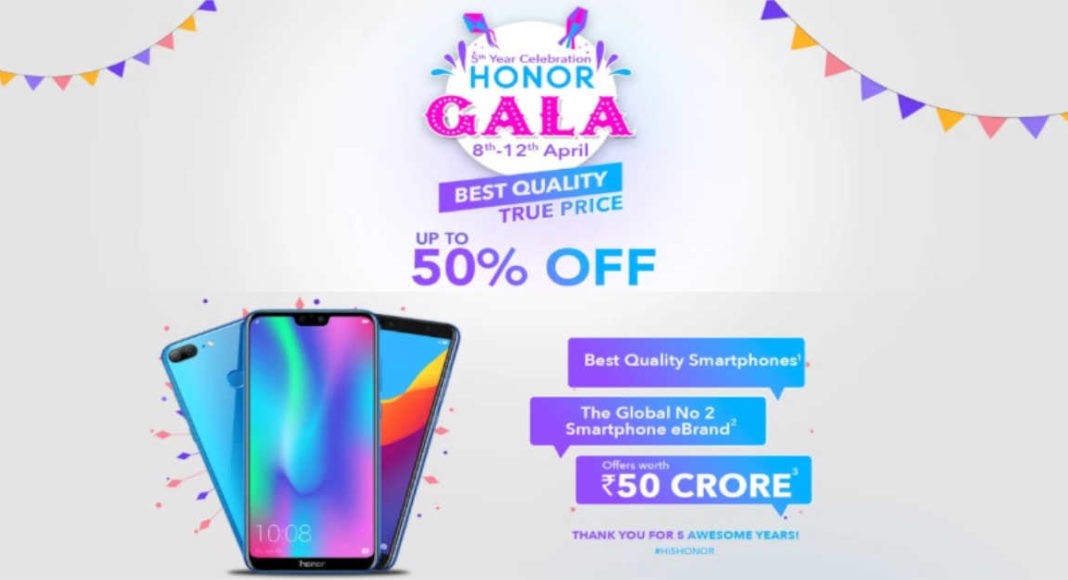 If you have been considering to buy yourself a new smartphone in the budget range, we have some good news for you. Chinese smartphone brand Honor has announced its Honor Gala Festival that will begin on April 8 and go on till April 12.

As a part of the sale, a number of smartphones from the company including Honor 9N, Honor 9 Lite, Honor 10 Lite, Honor 7A, Honor 7S, Honor 9i, and Honor 10 will be available at discounted prices on Amazon India and Flipkart.

The smartphone brand has also said that the Honor Gala Festival sale will have offers worth Rs 50 crores. However, as of now, there is no word on the discounts and offers that customers will be able to avail during this period.

According to an official press release by Honor, the sale on Amazon India’s website and Flipkart will bring offers on smartphones, smart wearables and tablets. In addition to this, a  microsite on Flipkart has also been set up and that has revealed some deals that the customers will be able to avail.

However, as of now, Flipkart’s microsite only talks about the discounts on a few smartphone models including Honor 9N, Honor 9 Lite and Honor 10 Lite. In addition to this, it says that there are some “now or never deals” on Honor 7A and Honor 7S. Deals can also be availed on Honor 9i and Honor 10 handsets.

Speaking about the sale, Suhail Tariq, CMO of Honor India said, “In our endeavour to create products those are meaningful to our consumers’ need and creating user-friendly technology interface, we have come a long way in India. Hence, we want to heartily thank our consumers by hitting the ground with the massive sale on our pre-eminent products from smartphones, wearable to tablets.”

Avani Baggahttp://www.gadgetbridge.com
Avani has an immense love for reading, travelling and food, but not necessarily in the same order. Avani almost started pursuing law, but life had other (better) plans for her and she chose to be a writer instead (luckily!) She previously covered technology at Times Internet and wrote about smartphones, mobile apps and tech startups. When she’s not writing, you’ll be able to find her in book stores or catching up on her social life.
Facebook
Twitter
WhatsApp
Linkedin
ReddIt
Email
Previous articleTwo Chinese students conned Apple of nearly $1 million in iPhone replacements scam: Report
Next articleGoogle ‘confirms’ its Pixel 3a smartphone