Indian Government launched Sandes, taking on WhatsApp: Here is what it offers and major differences

The app is not live on the Google Play Store but through the government's GIMS portal. 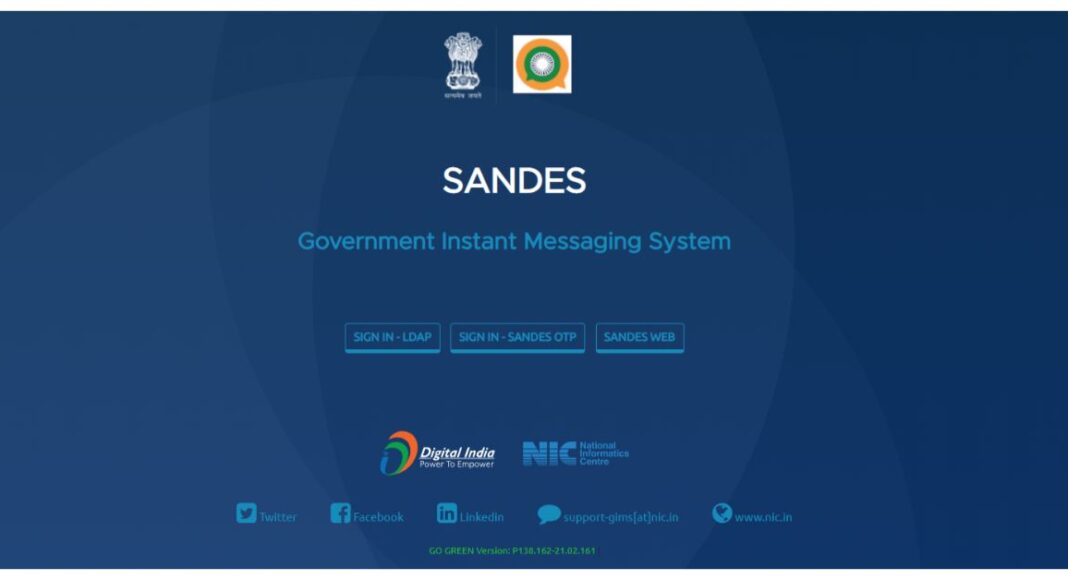 While users are happy with the latest WhatsApp policy change and have been trying out various alternatives to the messaging app the government of India has developed and launched Sandes messaging app. The all is now ready for download and is accessible to everyone however earlier it was only available for government officials.

With the launch of Sandes the PM Narendra Modi’s Digital India and Aatmanirbhar Bharat initiative is expected to get a boost while many WhatsApp users in India are still trying out different messaging apps. The Sandes messaging app is free to download and use with add-free experience.

It should be noted that when the messaging app is downloaded on your device the app’s name is displayed as GIMS (Government Instant Messaging System) because the new platform is an upgrade to the existing GIMS that was developed NIC (National Informatics Center), which is part of the Ministry of Electronics and Information Technology (MeitY) aimed as an alternative to WhatsApp.

The app is available for download in an APK file and is compatible with Android 5.0 and later. The app is not live on the Google Play Store but through the government’s GIMS portal. However, iOS users can simply download it through the Apps Store for devices running on iOS 12.0 and above.

Once you have downloaded the app akin to other similar apps you need to sign up on the Sandes app using your mobile number or email ID.  You will be receiving a  six-digit OTP for authentication. It is worth noting that now  Email IDs including Gmail, Hotmail, or other email accounts are allowed to register with the app. The only official @gov.in emails are allowed to register for the app while regular users are restricted to phone numbers only.

After signing up you can edit your profile and can also update your status too similar to WhatsApp. Although most of its features work similar to how you operate WhatsApp but there are some differences in both the instant messaging apps. The first major difference we have already explained is that one can also choose to register using a mobile number and now E-Mail IDs for the Sandes app however Signing up with emails is restricted to government officials using @gov.in email IDs to sign in.

The Indian messaging app also supports verified accounts for government employees that WhatsApp doesn’t offer. In addition to this Sandes also gives you an option to send chat backups to your emails which is not possible in the case of WhatsApp where the chats are backed up to Google Drive or iCloud only.

But sadly using Sandes you are not allowed to switch to another mobile number or email ID once signed up whereas WhatsApp comes with a dedicated Change Number feature to change from an old phone number to a new one.

Apart from this, the former one s allows users to share videos or photos with up to 500MB on the other hand the latter one gives an option to send videos with 16MB and regular files up to 100MB. Sandes also lacks key security features such as fingerprint lock feature and screen lock feature which we hope to be offered at a later stage. But it lets you check the weather details of your city in the app itself. Meanwhile, it includes all the other features akin to WhatsApp such as status, disappearing messages, forward messages, delete messages, archive chats and more.

Komila Singhhttp://www.gadgetbridge.com
Komila is one of the most spirited tech writers at Gadget Bridge. Always up for a new challenge, she is an expert at dissecting technology and getting to its core. She loves to tinker with new mobile phones, tablets and headphones.
Facebook
Twitter
WhatsApp
Linkedin
ReddIt
Email
Previous articleSamsung Galaxy S20 series, Galaxy Note20 series, Galaxy Z Fold2 and Galaxy Z Flip series and several other smartphones introduced with One UI 3.1 update
Next articleGoogle Chrome update to bring performance improvements with less RAM operation