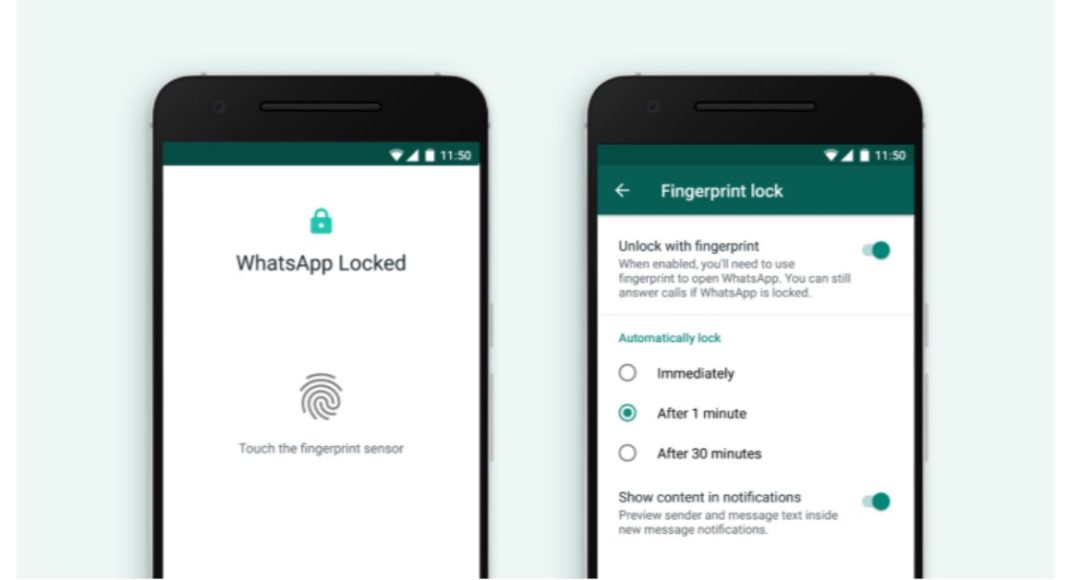 In order to make its app more user-friendly, WhatsApp brings new features to its platform. A few months ago we reported that the instant messaging platform rolled out the Android beta version 2.19.221 that brought the fingerprint authentication features for its users. Now the company has started rolling out the stable version of the new feature.

The facebook-owned instant messaging app, WhatsApp, has now introduced a fingerprint lock for Android users. From now onwards users will be able to add an additional layer of protection to the messaging app to make their chats more secure and private. The company announced the roll out via blog post. To enable it, tap Settings > Account > Privacy > Fingerprint lock. Turn on Unlock with fingerprint, and confirm your fingerprint.

To unlock the app, users will be asked to verify themselves using their fingerprints. Apart from that according to their preference the users can also choose from an automatic lock option within the app. They can choose to lock the app immediately, after 1 minute, and after 30 minutes.

In addition to this for more privacy and security, the users will also be able to hide the content of the messages in the notifications itself. If the user enables the feature the app will ask for fingerprint authentication to open the chat.

Apart from that, the company has also introduced the WhatsApp business App for iOS for better communication between small businesses and customers. The app is free to download from the Apple App Store. From today WhatsApp Business app will be available in Brazil, Germany, Indonesia, India, Mexico, the U.K. and the U.S. The company promised to roll out the app across the world in the coming weeks.

Also, WhatsApp has introduced new privacy settings for groups to allow the user to decide who can add them to groups. The new feature can be enabled by heading to Setting options within the app then tap Account > Privacy > Groups and select one of three options: “Nobody”, “My Contacts”, or “Everyone”. When the user chooses nobody option they will have to approve joining every group to which they are invited.

Komila Singhhttp://www.gadgetbridge.com
Komila is one of the most spirited tech writers at Gadget Bridge. Always up for a new challenge, she is an expert at dissecting technology and getting to its core. She loves to tinker with new mobile phones, tablets and headphones.
Facebook
Twitter
WhatsApp
Linkedin
ReddIt
Email
Previous articleApple TV+ (Plus) service goes live in India and across the world
Next articleIncognito mode for Google Maps is now available for Android users, coming to iOS users soon