Is Samsung Galaxy A50s is worth a buy? 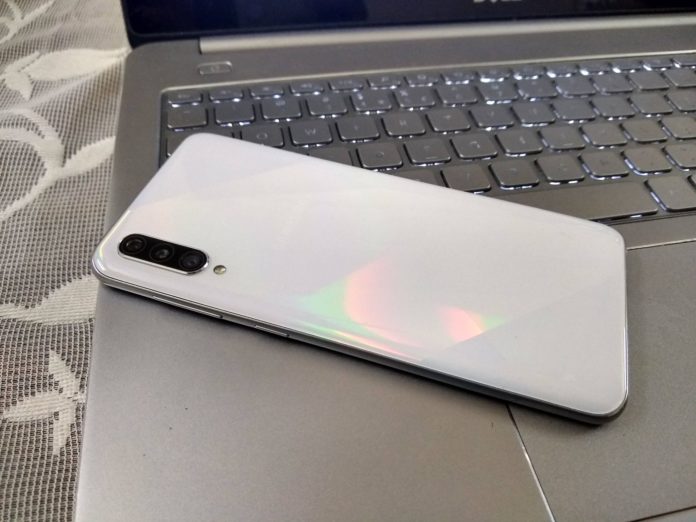 This year Samsung has launched so many devices in the market and especially it has expanded it’s A series of smartphones. Best known for premium smartphones the company too offers many devices under budget segment, for instance, Galaxy A and J series. The South Korean smartphone company recently launched Samsung Galaxy A50s in India. The price of the smartphone starts at Rs 22,999 and is available via all the leading online stores and offline retailers across the country.

As we already mentioned earlier that Samsung launched Galaxy A50 earlier this year. The successor, Galaxy A50s, comes with a 6.4-inch display. It has a slim bezel, but a visible chin and a teardrop notch on the top of the screen housing a selfie camera. And when you flip it you will become aware of the prism-like effects refracting the light off the back panel. For the review, we got the Prism Crush White variant that made it appear awfully gorgeous. 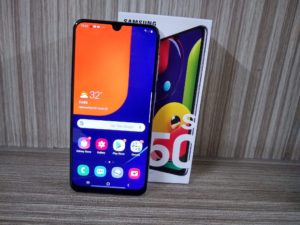 The company has used plastic-like material which is lighter in the hand. However, it is more prone to fingerprints and scratches. We would suggest you to use the clear case to protect the Samsung Galaxy A50s from scratches that comes along with the phone inside the box.

Besides this, the smartphone has curved edges and the back panel has the same design concept, which we saw on its predecessor. On the back panel, you will also see the triple camera set up vertically placed in a module on the top left corner and an LED flashlight underneath it. At the center, you will see a Samsung logo. 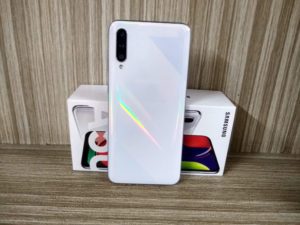 On the right edge of the smartphone, there is a volume rocker key and below it you can find the power button. Despite having a large screen the buttons were easily accessible even if the user has small hands. While on the left there is a dual SIM tray.

At the bottom edge, the Samsung Galaxy A50s handset has a USB Type-C charging port, a 3.5mm headphone jack and a speaker grille.

Looking at the front we felt that Galaxy A50s display is identical to its predecessor with exactly the same size screen as well as panel type. We should point out that Galaxy A50 also has the same Infinity-U shaped notch on its display. All in all, Samsung Galaxy A50s looks contemporary. 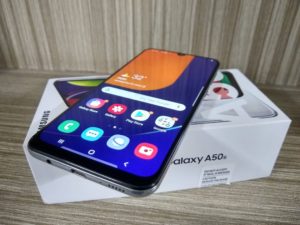 Moving on to the display, the Samsung Galaxy A50s features a 6.4-inch full-HD+ (1,080×2,340 pixels) Infinity-U Super AMOLED display. The display seems sharp and bright serving our needs while watching a movie or checking out our Instagram feeds thanks to the bezel-less design. And the blue light filter feature was really helpful while viewing the phone during dark conditions. The readability of the device under bright sunlight was good enough we did not face any difficulty using the phone under the sunlight.

Samsung Galaxy A50s draws the power from the octa-core Exynos 9611 SoC processor clubbed with 6GB of RAM along with 128GB of internal storage. In case you need more storage space then you can expand the memory with the help of a microSD card up to 512GB. The smartphone runs on Android 9 Pie with One UI on top that is the best part of it, because it has all the features which a flagship phone has and we did not come across any lags during the review.

However, one thing that was really bothersome is its fingerprint sensor which at times took a wee bit extra time to unlock. We used the face unlock option in its place were much happier. 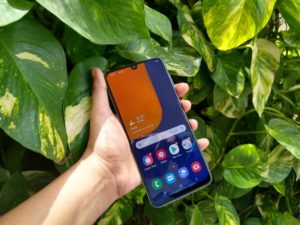 Like most Samsung smartphones, pressing the power button for long will activate the Bixby and to shut down the device there is a dedicated power off button inside the quick toggle else you can also switch it off by long-pressing the power off and volume down button. There is also an edge panel on the right side of the display which appears when swiped inwards. The Edge contains apps that are used the most or you can create shortcuts to access specific functions, keep your favorite contacts and more. You can also use two apps at the same time with the use of the app pair.

Now we already know that it is powered by Exynos 9611 SoC processor that allows you to play PUBG in HDR mode. But we recommend you to play the game in HD mode rather than HDR mode for the better lag-free gaming experience. In Samsung Galaxy A50swe also get game booster options that are of assistance while playing games.

Below are a few benchmark results of the Samsung Galaxy A50s:

Until now we did not experience any problem related to the performance of the smartphone. We have earlier reviewed the Samsung Galaxy A50 so we can assure you performance-wise the successor is better than its predecessor. The smartphone comes with a battery capacity of 4000mAh, which offers a battery life of more than one day. 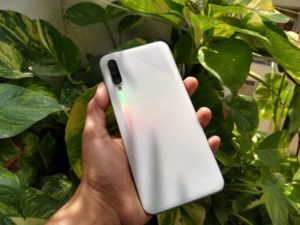 Inside the box of Samsung Galaxy A50s, you get a 10W charger and a USB Type-C cable. Together it takes the device more than two hours to fully charge. During the test, we streamed videos, played music, clicked pictures as well as surfed the internet and the battery lasted the whole day, but it needed to be charged before going to the bed.

The camera app comes with an array of features such as Food, as the name suggests if you love clicking pictures of your food to post it on your social media the phone has this dedicated feature. There is a night mode for clicking pictures under dark conditions. Panorama, Pro mode is also included plus there is a Live focus mode for clicking portraits. For video recording, there is a slow-motion mode, super slow motion and Hyper lapse mode. You can also record the videos in 4K. But while recording the videos in 4K you have to keep your hands still or shakes will appear in the final cut.

The images delivered by the Samsung Galaxy A50s were of good quality. During the daytime and good light conditions, the images were sharp as well as vibrant. Here we would like to mention that all the pictures taken from the phone look really good but the real output is shown on a laptop. Honestly speaking we were not satisfied with the performance it showed there, the pictures definitely could have been better especially in low light conditions.

The portrait mode in the Samsung Galaxy A50s uses the depth camera, which adds a blur around the subject. You can also adjust the blur effect within the app while clicking the picture, too. This adjustment can also be done after you have already taken the shot, now that is neat. 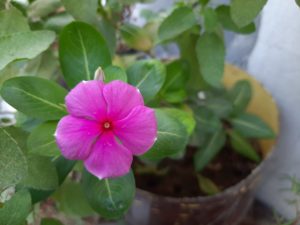 Most of us love taking selfies to upload it on our social media profiles. Earlier the Galaxy A50 had a 25-megapixel camera but in the upgraded version there is a 32-megapixel selfie camera on the Samsung Galaxy A50s. We took lots of selfies in normal mode and Live Focus mode as well. We were happy with the performance of the selfie camera when the pictures were taken in normal mode but not so much when taken in Live Focus mode. We have seen better from some of its competition.

Samsung Galaxy A50s comes with a price tag of Rs 22,999 for the 4GB RAM variant and Rs 24,999 for the 6GB RAM. Both the variants offer 128GB of internal memory, which can be expanded up to 512GB using a microSD card. In terms of looks, display, battery life and performance the phone is enterprising contenders. The Samsung Galaxy A50s is sleek, light in weight and has everything to offer at this price range.

But the camera quality could have been better especially when the pictures taken during low light situations and the portraits also. The device doesn’t do justice to the price if you are just looking for great imagery.  For everything else, it is a very good buy.

Cameras could be better

Price could be slightly less

- Advertisment -
This year Samsung has launched so many devices in the market and especially it has expanded it’s A series of smartphones. Best known for premium smartphones the company too offers many devices under budget segment, for instance, Galaxy A and J series. The South...Samsung Galaxy A50s Review: Shines like a prism