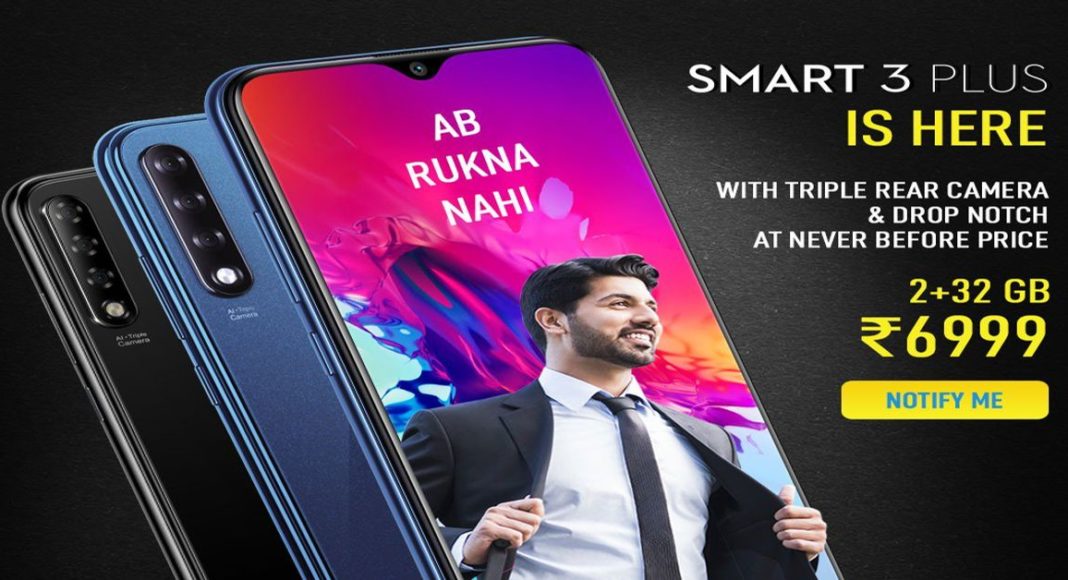 The device offers some good features for the price it is being offered at by Infinix. Here’s a look at the pricing details and specifications of the Infinix Smart 3 Plus smartphone:

Infinix Smart 3 Plus price and availability

The Infinix Smart 3 Plus is priced at Rs 6,999 for the 2GB RAM/ 32GB storage variant. The device can be bought from Flipkart from April 30 onwards.

Infinix Smart 3 Plus specifications and features

Infinix Smart 3 Plus sports a 6.21-inch HD+ (720 x 1520 pixels) display with an aspect ratio of 19.5:9, 269ppi pixel density and 2.5D glass protection. The smartphone has an 88% screen-to-body ratio. The newly launched handset is powered by the 64-bit Helio A22 quad-core processor clocked at 2GHz paired with IMG PowerVR GPU. It comes with 2GB of RAM and 32GB of internal storage and can hold a microSD card of up to 256GB.

The Smart 3 Plus comes with dual-SIM (Nano) slot along with a dedicated microSD card slot. The device runs Android 9 Pie skinned with XOS 5.0 and it packs a 3,500mAh battery. According to the company, the battery of the Infinix Smart 3 Plus can give up to 25 hours of 4G talk time, 34 hours of music playback, 10 hours of video playback, and 25 days of standby time.

On the camera front, the Smart 3 Plus packs triple-rear camera setup which comprises of a 13MP sensor with an f/1.8 aperture paired with a 2MP sensor along with a low-light tertiary sensor. For selfies and video calls, there is an 8MP front-facing camera with AI beauty mode and screen flash. The rear camera comes with features such as PDAF, dual-LED flash, auto scene detection, AR Stickers, and much more. The back panel of the device also sports a fingerprint scanner.

Aman Singhhttps://www.gadgetbridge.com/
Aman Kumar Singh has a Masters in Journalism and Mass Communication. He is a journalist, a photographer, a writer, a gamer, a movie addict and has a love for reading (everything). It’s his love of reading that has brought him knowledge in various fields including technology and gadgets. Talking about which, he loves to tweak and play with gadgets, new and old. And when he finds time, if he finds time, he can be seen playing video games or taking a new gadget for a test run.
Facebook
Twitter
WhatsApp
Linkedin
ReddIt
Email
Previous articleMeizu 16s with 48MP primary camera, Snapdragon 855 processor launched: Price and specifications
Next articleRedmi Y3, Redmi 7 set to launch in India today: How to watch the live stream