The device will be powered by Qualcomm Snapdragon 778G SoC and a 5,000mAh battery.

Vivo’s sub-brand started teasing iQoo Z5 5G launch in India. The device is the company’s latest that will succeed the existing iQoo Z3, which was launched in India in June this year. Now the company has confirmed that the upcoming phone will be launching in India on September 27. But before coming to India the device will make its debut in China on September 23.

iQoo has also listed Z5 5G on Amazon to tease its availability in the country. The company took to Twitter to announce the exact launch date for iQoo Z5 5G in India. The upcoming phone is scheduled to take place on September 27 at 12 noon. As of now in India, the company has not yet revealed any details with regard to its specification or pricing.

But like we told you earlier prior to iQoo Z5 5G launch in the country, the phone will be introduced in China on September 23 at 2:30 pm CST Asia and 12 pm IST. So iQoo has started teasing the specs and design of the smartphone ahead of the official announcement. As per the alleged official images shared on the Chinese microblogging site Weibo the smartphone will be available in three colour options of  Black, White, and Blue with the hues of pink and purple. Unlike the iQoo Z3 which carries a subtle design, the company will include a pinstripe-style design variant as well. The images show a triple rear camera set-up housed inside a rectangular camera module.

The leaked images of the #iQOOZ5 will launch in China on Sept 23 and in India on Sept 27 pic.twitter.com/ZKRVkISx4s

In terms of specs, iQoo Z5 5G is confirmed to pack a 5,000mAh battery. In addition to this, it will be equipped with a Snapdragon 778G SoC with LPDDR5 RAM and UFS 3.1 storage which is an upgrade over the Qualcomm Snapdragon 768G SoC which comes on the existing model. The phone is also confirmed to feature a hole-punch display with support for a 120Hz refresh rate, HDR 10, a 240Hz touch sampling rate, and a DCI-P3 colour gamut. The device will also include stereo speakers with support for Hi-Res Audio and Hi-Res Audio Wireless. 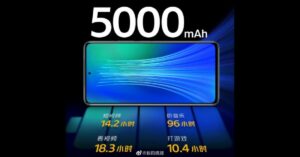 Moreover, iQoo Z5 5G is tipped to be priced under the Rs 30,000 price segment in the country. The device has been listed on Amazon and the dedicated landing page confirmed the availability of the phone on the e-commerce platform.

Komila Singhhttp://www.gadgetbridge.com
Komila is one of the most spirited tech writers at Gadget Bridge. Always up for a new challenge, she is an expert at dissecting technology and getting to its core. She loves to tinker with new mobile phones, tablets and headphones.
Facebook
Twitter
WhatsApp
Linkedin
ReddIt
Email
Previous articleHow to track your lost Android smartphone without a tracking app?
Next article21 September 2021 Amazon Quiz: Answer five easy questions to win Rs 20,000 Amazon Pay Balance