Jio’s new Disney+ Hotstar plans launched: Users to get unrestricted access to all content on the platform 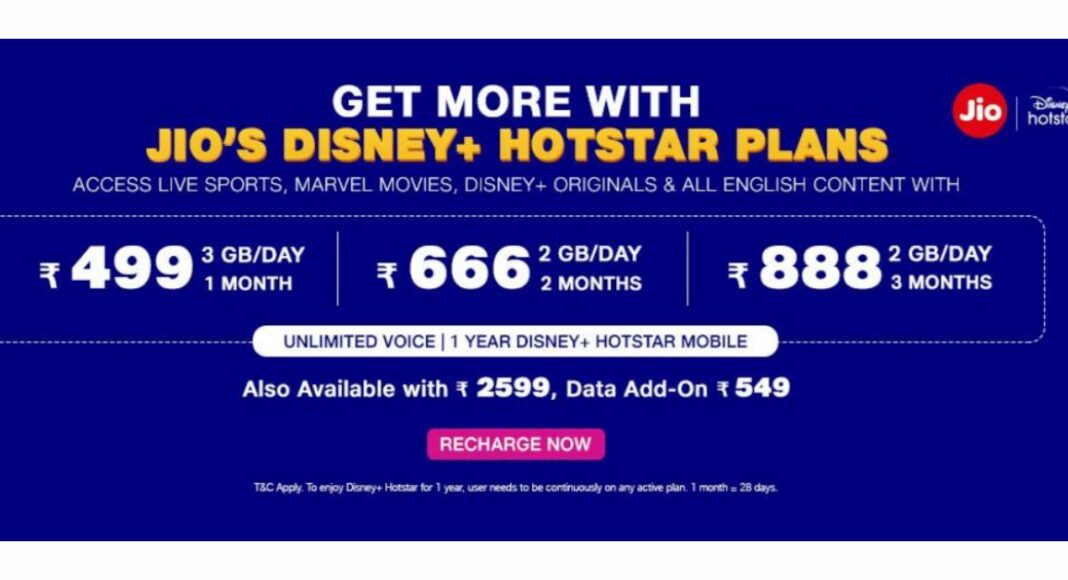 Telecom company Reliance Jio today announced new Disney+ Hotstar plans for the users. These plans will be available from September 1 that is tomorrow. The new Jio Disney+ Hotstar plan starts at Rs 499 and goes up to Rs 2,599. In addition to the access to complete content streaming, the prepaid plans also bring along with other benefits like free voice calls, SMS and data.

Reliance Jio has rolled out a new range of prepaid plans for the Disney+ Hotstar subscriptions. This will give access to unrestricted content streaming on the OTT platform. Previously the prepaid plans started at Rs 401 which included a Disney+ Hotstar VIP subscription that gave access to services like live sports, Hotstar specials, movies and TV shows and dubbed content.

But the new Disney+ Hotstar plans bring access to the entire range of content on the platform. In addition to this, the customers will be able to view international content in English with the new plans which include Disney+ original, TV Shows from Disney and Marvel, Star Wars, National Geographic, HBO, FX, Showtime, 20th century, Searchlight pictures and more.

The new plan will be available for recharge from September 1 and all the Jio customers on active Disney+ Hotstar plans will continue to enjoy the existing benefits until their current subscription expires.

“The revision is largely on the back of Disney+ Hotstar revising its plan and offerings in the Indian market. Jio’s new plans, in addition to offering a 1-year subscription of Disney+ Hotstar, comes bundled with unlimited voice, data, SMS, Jio Apps and other benefits,” the company stated.

Komila Singhhttp://www.gadgetbridge.com
Komila is one of the most spirited tech writers at Gadget Bridge. Always up for a new challenge, she is an expert at dissecting technology and getting to its core. She loves to tinker with new mobile phones, tablets and headphones.
Facebook
Twitter
WhatsApp
Linkedin
ReddIt
Email
Previous articleAcer to soon launch its home entertainment segment in India
Next articleWindows 11 to be available from October 5, Microsoft confirmed