The Mobile World Congress 2019 is just days away now. One of the biggest tech shows of the year will begin on February 25 in Barcelona, Spain and most major smartphone makers like Huawei, LG, Oppo, Xiaomi, HMD Global and Microsoft have confirmed that they will be present at MWC 2019. However, one company which had not broken its silence on this so far was Lenovo.

But now, the Group VP of the Chinese smartphone maker – Chang Cheng – has confirmed that Lenovo will also make an appearance at the upcoming Mobile World Congress and that it has plans to unveil its Lenovo Z6 Pro smartphone at the event.

We should mention that the smartphone is the successor of Lenovo Z5 Pro handset, that was launched in China in November last year. Cheng made the announcement via Chinese social networking website Weibo that the company’s upcoming smartphone, Lenovo Z6 Pro, will get unveiled at MWC 2019 in Barcelona. However, the poster that he has shared to make the announcement does not reveal too much about the next-generation smartphone.

The image that has been shared shows ripples in the middle, which may be indicating the presence of an in-display fingerprint scanner on the device. We wouldn’t exactly be surprised to see this as the smartphone’s predecessor also came with an on-screen fingerprint sensor. The Lenovo Z5 Pro smartphone also came with a slider design and featured a dual rear camera setup on its back panel.

We should also add that the company also launched its Lenovo Z5 Pro GT variant that comes with 12GB of RAM and Qualcomm Snapdragon 855 processor in December 2018, a month after launching the vanilla variant. The upcoming Lenovo Z6 Pro is expected to come with more high-end specifications in terms of camera and design. 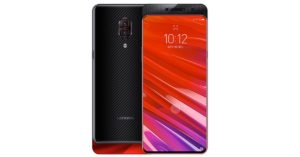 To recall, Lenovo had engaged in guerrilla marketing techniques when it launched the Z5 Pro smartphone and had made tall claims about the device. When the smartphone did not meet the expectations of users at the launch, the company somewhere lost its credibility and its teasers were no longer taken seriously. Maybe that is the reason that the Chinese smartphone brand has adopted a different route to market its Lenovo Z5 Pro smartphone.

This is actually the first time that Cheng has spoken about the smartphone, which completely defies the way he normally posts teasers of smartphones months ahead of their launch.

Avani Baggahttp://www.gadgetbridge.com
Avani has an immense love for reading, travelling and food, but not necessarily in the same order. Avani almost started pursuing law, but life had other (better) plans for her and she chose to be a writer instead (luckily!) She previously covered technology at Times Internet and wrote about smartphones, mobile apps and tech startups. When she’s not writing, you’ll be able to find her in book stores or catching up on her social life.
Facebook
Twitter
WhatsApp
Linkedin
ReddIt
Email
Previous article
Samsung Galaxy Buds launched with wireless connectivity
Next article
Samsung Galaxy S10 vs Apple iPhone XS: Comparison