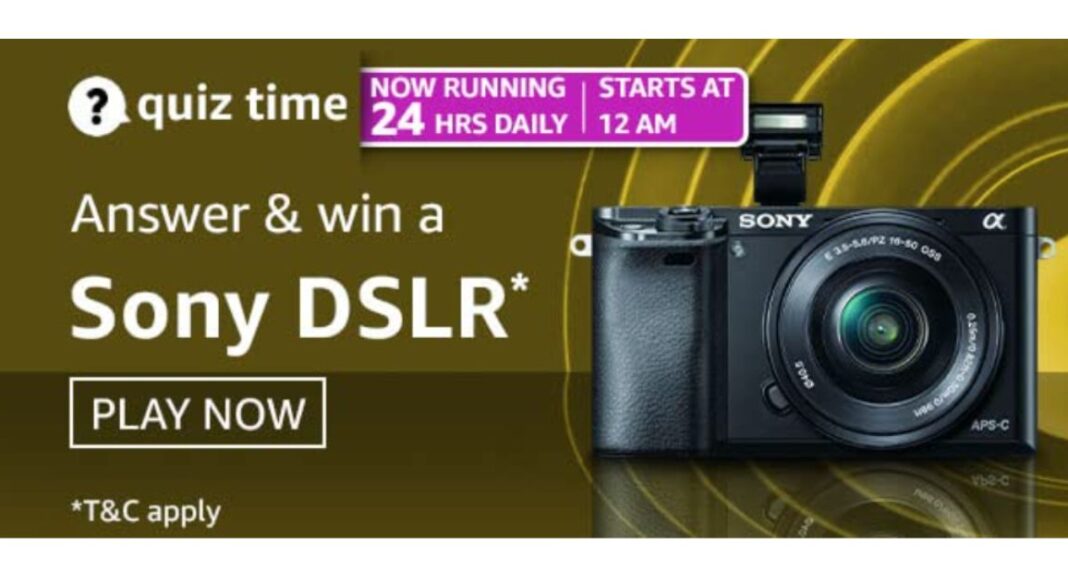 Every day Amazon India brings a daily quiz for its customers to win exciting new prizes every day on its platform. The Amazon Quiz can be played daily from 12 AM to 11:59 PM. Today you can win a Sony DSLR camera if you managed to answer all the questions correctly. Daily a new set of questions is presented in front of the participants that gives millions of people across the country to win exciting prizes.

The Amazon Quiz has gone live on its mobile platform. The participants have to answer 5 questions that are based on general knowledge and current affairs. After clearing the daily quiz their name will be shortlisted for a lucky draw to select a winner. Amazon announces the results of the lucky draw at the end of the month. So today’s Quiz will let you win a Sony DSLR camera.

Question 1: A species of bacteria discovered onboard the International Space Station has been named after which Indian biodiversity scientist?

The answer is- Seyed Ajmal Khan

Question 2: As per a survey conducted by Duff & Phelps, who has been ranked as the most valuable Indian celebrity for the 4th consecutive year in 2020?

The answer is- Virat Kohli

Question 3: Which of these former world leaders threw a Zoom party in quarantine to celebrate his 90th birthday?

The answer is- Mikhail Gorbachev

Question 4: What is the record for the most number of Grand Slam singles titles won by a male player in this sport?

Question 5: When he meets his father during the ‘TIme Heist’ in Avengers: Endgame, he introduces himself by what name?

The answer is- Howard Potts

Komila Singhhttp://www.gadgetbridge.com
Komila is one of the most spirited tech writers at Gadget Bridge. Always up for a new challenge, she is an expert at dissecting technology and getting to its core. She loves to tinker with new mobile phones, tablets and headphones.
Facebook
Twitter
WhatsApp
Linkedin
ReddIt
Email
Previous articleJioPhone users to get 300 minutes of free outgoing voice call per month, also get a buy-one-get-one offer on any recharge plan
Next articleMay 16 Flipkart Daily Trivia Quiz Answers: Answer to win exciting prizes