The device comes with 11 sports modes

At the Smarter Living 2021 event in India today the Chinese electronics major Xiaomi brought a slew of its smart devices to the country. The company launched the much-awaited Mi Smart Band 5 alongside its first smartwatch Mi Watch Revolve. Other than this the company has also launched a smart speaker also. The smartwatch is the rebranded variant of Mi Watch Color which debuted in China later last year.  To recall the smart band is the successor of Mi Band 4 that was launched in India last year in September

Mi Smart Band has been launched in India with a price tag of Rs 2,499. It will be available in Black, Navy Blue, Teal, Purple, and Orange strap colour options. The fitness band will go on sale on October 1 via Mi.com and Amazon as well as offline retailers including Mi Home stores. 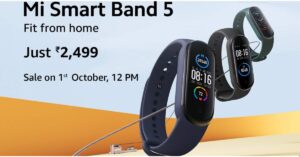 Mi Smart Band 5 comes with a 1.1-inch coloured AMOLED display with a resolution of 126×294 pixels. In addition to this, it offers 16-bit colour, and 450 nits brightness. It offers 100 officials as well as third party animated watch faces along with 11 fitness tracking modes as well as it can also track menstrual cycles and ovulation phases. It has an improved sleep monitoring feature along with a heart rate sensor to monitor heartbeat during the workout sessions.

Apart from fitness and health features the smart band is water-resistant to up to 50 metres, notifies when emails, social media notifications, on incoming calls and has music control as well as a remote-control camera. According to the company it delivers 14 days of battery life in regular use and up to 21 days of battery life in power saving mode. In addition to this, the fitness band also supports magnetic charging so that the users can charge it without having to take off the capsule from the strap.

Komila Singhhttp://www.gadgetbridge.com
Komila is one of the most spirited tech writers at Gadget Bridge. Always up for a new challenge, she is an expert at dissecting technology and getting to its core. She loves to tinker with new mobile phones, tablets and headphones.
Facebook
Twitter
WhatsApp
Linkedin
ReddIt
Email
Previous articleThomson TSP10 Tower speakers launched in India
Next articleOppo Watch review: For the everyday power user