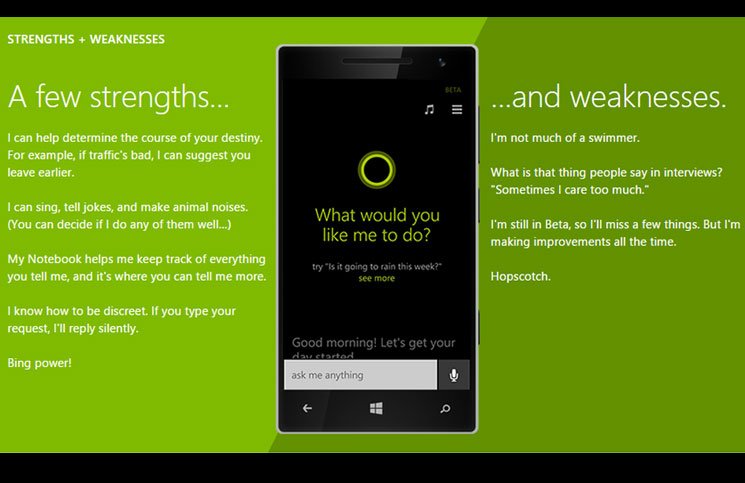 Earlier this year lot of Indian hearts got broken when Microsoft decided not to bring its virtual assistant Cortana to India with Windows 10. However, reports have emerged from camp Microsoft that Cortana might come to India very soon. The latest statement released by the computer OS leader states that Cortana will be available to Windows Insider Program participants in Australia, Canada and India. Yes, that is correct the test phase for the virtual assistant Microsoft Cortana will start in India as well.

With the launch of Windows 10 on July 29, Microsoft Cortana will be available in seven countries – USA, UK, China, France, Italy, Germany and Spain. India is not on the map, but at least the smart VA will be available to WIP members in India. This just makes us wonder how fast can they bring Cortana to India. We reckon it will be before this year ends. Keeping our fingers crossed.

Sulabh Purihttp://www.gadgetbridge.com
Sulabh Puri is the Editor In Chief of GadgetBridge.com. A content specialist, he started his career young and it has been a rewarding 15 years for him. Before heading Gadget Bridge, he was the Editor of Times of India (TOI) Technology and GadgetsNow.com. He has also led TOI’s international edit arm as the Editorial Head of Business Insider India and Tech Radar India. He has also worked with various media houses such as the India Today Group and Cybermedia. He loves everything ‘gadgety’ and enjoys tinkering with new tech toys and automobiles. A graduate in commerce from Delhi University, he is also an adept graphic designer. When he is not working, he can be found in the kitchen, cooking mouth-watering chocolate cakes and croissants.
Facebook
Twitter
WhatsApp
Linkedin
ReddIt
Email
Previous articleLG launches G4 Stylus for Rs 24,990 in India
Next articleA 42-inch Full HD LED TV for Rs 32,000? Yes, the latest VU Edge is available for that much