HomeMobilesMotorola One Action to launch on August 23 in India

Motorola One Action to launch on August 23 in India

The device will be sporting a triple rear camera set up 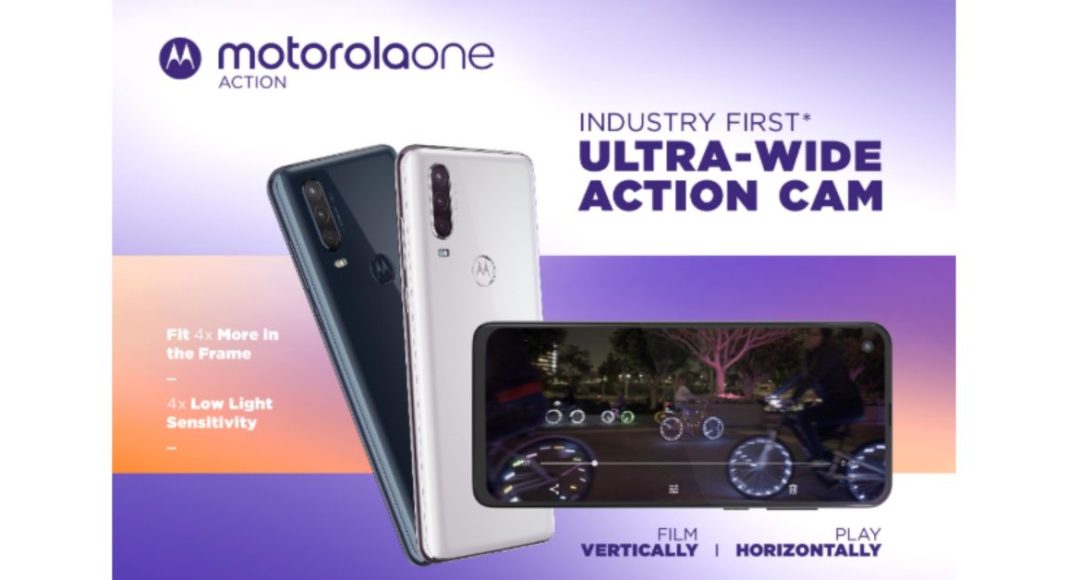 As we mentioned above the handset has been launched by the company and at present will be up for sale in Brazil, Mexico, and a number of European countries and will be made available in Latin America, Europe, and the Asia Pacific next month. Motorola One Action is expected to be launched in India on August 23 and it comes at a price tag of EUR 259 (approximately Rs 20,400).

The company in its official blog post revealed that Motorola One Action will arrive in the U.S. universally unlocked and Canada in early October. In addition to this, the company also revealed the specifications as well as the camera capabilities of the upcoming device.

Motorola One Action specifications and features

The new Motorola One Action will be powered by octa-core Samsung Exynos 9609 SoC coupled with Mali G72 MP3 GPU and 4GB of RAM. The latest Smartphone runs on Android 9 Pie. The company claims that the device will be upgraded to Android Q as well as Android R along with Security updates for a duration of three years from the date of launch.

Motorola One Action features a 6.3-inch full-HD+ (1080×2520 pixels) IPS CinemaVision display. It comes with 128 GB of internal storage that can be further expanded up to 512GB via microSD card.

Now coming on to the camera capabilities that is the USP of the upcoming device. Motorola One Action sports a triple rear camera setup that includes a 12-megapixel primary sensor along with an f/1.8 lens and an action camera with a 2-micron pixel size and f/2.2 lens that supports 117-degree of Field of View (FoV). Moreover, it comes with a 5-megapixel depth sensor with an f/2.2 lens makes it simple to add a natural blur effect to the photos.

On the front, it features a 12-megapixel camera sensor with 1.25-micron pixel size and an f/2.0 lens. The front camera includes various features like Portrait lighting, shot optimisation, Auto smile capture, Group selfie, Portrait mode, Cinemagraph and so on.

Connectivity options includes 4G LTE, Wi-Fi 802.11ac, Bluetooth v5.0, GPS/ A-GPS, NFC, USB Type-C, and a 3.5mm headphone jack. The sensors on the phone include an accelerometer, ambient light, gyroscope, fingerprint reader, magnetometer, and proximity sensor. The Motorola One Action houses a 3,500mAh battery that is supported by 10W charging that claims to allow the user to watch 11 hours of movies and back again listen to their favorite playlists for 47 hours. It measures 160.1×71.2×9.15mm and weighs 160 grams.

Komila Singhhttp://www.gadgetbridge.com
Komila is one of the most spirited tech writers at Gadget Bridge. Always up for a new challenge, she is an expert at dissecting technology and getting to its core. She loves to tinker with new mobile phones, tablets and headphones.
Facebook
Twitter
WhatsApp
Linkedin
ReddIt
Email
Previous articlePokémon Sword and Shield trailer released will come with new attacks and abilities
Next articleAirtel 4G Hotspot now offers 1.5GB daily data for 224 days