Motorola Razr with foldable screen to launch in India today: How to watch the Livestream

The foldable phone will compete with Samsung Galaxy Z Flip in the market. 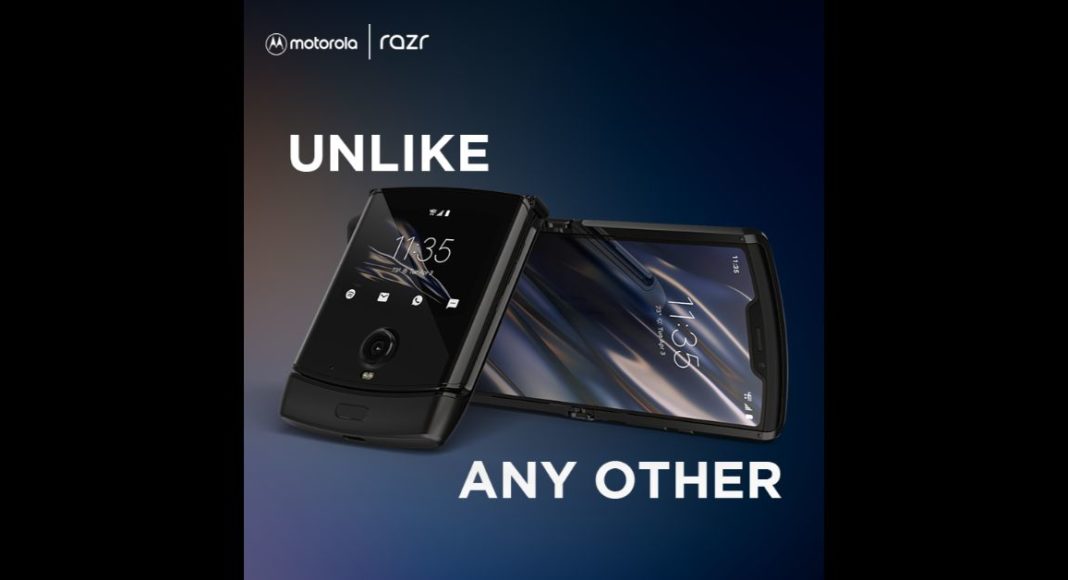 Lenovo owned Motorola is all set to launch its foldable device Motorola Razr in India today. The company introduced the device last year in November even before Samsung’s Galaxy Z Flip. The device is the redesigned variant of its popular old series Moto Razr flip phone that was a super hit feature phone in the American and Indian markets. The biggest feature of the device for its clamshell design which sets the purpose of compactness. It is much like its predecessor which opens and closes vertically.

The foldable phone will compete with Samsung Galaxy Z Flip in the market. Read on to know more about the upcoming foldable smartphone.

Motorola Razr expected pricing and how to watch the live stream

The unveiling of Motorola Razr will begin at 12.30 noon via the company official YouTube channel and will also be streamed via all its social media channels simultaneously.  Those who wish to watch the action live can watch the live stream here on our website.

In terms of pricing, Motorola first made Razr available in the Canadian and the US market. The device comes with a price tag of $1,500 which translates to Rs Rs 1,11,000 as per Indian currency. But in India, the smartphone is expected to be pricier. It will be available for purchase via the e-commerce website Flipkart. The device is going to take on Samsung Galaxy Z Flip which is now available in India at Rs 1,09,999 which also indicated that the company might launch the phone at a slightly lower price.

Motorola Razr is a redesigned variant of its iconic smartphone Razr V3 from 2004. Keeping the nostalgia factor high Moto Razr will carry a similar form factor of the iconic smartphone which few changes. The keypad and the small TFT display has been replaced by an  OLED display and the phone comes with a water-repellent body. When folded it there’s a tiny 2.7-inch Quick view display with 600×800 pixels of resolution. The outer display can be used to check notifications, enable Google Assistant, control music, show the time as well as take selfies. On the outside, you get a 16-megapixel main camera with f/1.7 aperture which also works as a selfie shooter. The camera is supported by Night Vision mode.

When unfolded it features a full length 6.2-inch flexible OLED HD+ screen with a 21:9 aspect ratio and 876×2,142 pixels of resolution. Unlike the original Motorola Razr, the phone does not have any gap between the two halves of the screen and is supported by a unique hinge system that folds the phone easily. The main display notch also houses a 5-megapixel camera inside it to take selfies.

Under the hood, there is an octa-core Qualcomm Snapdragon 710 SoC processor coupled with 6GB of RAM and 128GB of storage. The all-new Moto Razr runs on Android 9 Pie and it houses a 2,510mAh battery supported by a 15W TurboPower fast-charging tech. Also, the phone does not have any headphone jack and it has eSIM support.

Komila Singhhttp://www.gadgetbridge.com
Komila is one of the most spirited tech writers at Gadget Bridge. Always up for a new challenge, she is an expert at dissecting technology and getting to its core. She loves to tinker with new mobile phones, tablets and headphones.
Facebook
Twitter
WhatsApp
Linkedin
ReddIt
Email
Previous article
Participate in Amazon Quiz and win Rs 50,000 Amazon Pay Balance
Next article
Samsung postpones the launch of Galaxy M21 in India, will now launch on Wednesday, March 18