The launch will take place at 12 noon via Flipkart. 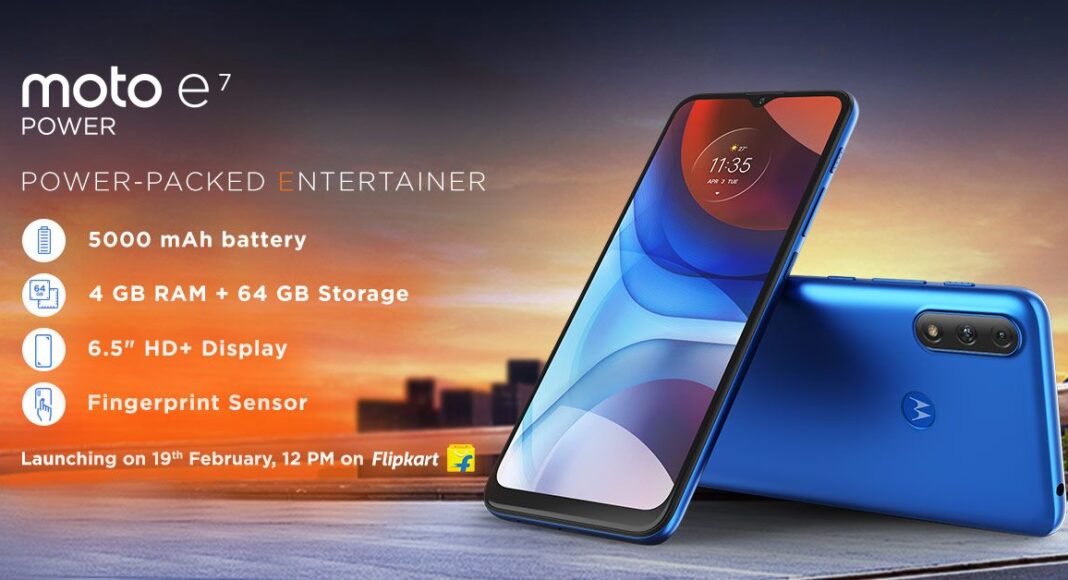 Earlier this week Motorola was supposed to launch its new Moto Evariant in India but the company rescheduled the launch to February 19. So today Moto E7 Power is confirmed to make its debut in the country. Prior to the launch the smartphone has been subject to several leaks and rumours and has also appeared in a Geekbench listing. Apart from this the Lenovo-based company also created a dedicated microsite that lists most of the key specifications via Flipkart. It is confirmed to come with a waterdrop-style notch HD+ display and will be offered in a minimum 64GB storage option.

Moto E7 Power is set to launch in India and is going to launch in India today. The launch will take place at 12 noon via Flipkart. The company is not going to hold any special event to launch its latest product but ahead of the launch, the dedicated microsite on the e-commerce platform has listed out most of the details about the new Motorola phone.

As per the listing, Moto E7 Power will be featuring a 6.5-inch HD+ Max Vision display with a water drop-style notch. The processor is not confirmed but the device is going to be powered by an octa-core SoC. However, the Geekbench listing confirms that it is likely to include a MediaTek Helio P22 SoC.

Besides this, the dedicated microsite by Flipkart shows that Moto E7 Power will be available in 4GB of LPDDR4X RAM paired with at least 64GB of internal storage. The memory can also be expanded up to 1TB using a microSD card.

In terms of cameras, it is slated to include a  dual rear camera setup consisting of a 13-megapixel primary sensor along with an LED flash. Other camera sensor details remain uncovered. But Moto E7 Power is most likely to feature a 2-megapixel secondary sensor while on the front there could be a 5-megapixel selfie camera sensor.

In addition to this, there will be a rear-mounted fingerprint sensor on Moto E7 Power to unlock the device and shall also have 2×2 MIMO Wi-Fi network support. The is confirmed to include a USB Type-C port for charging and a 3.5mm audio jack as a connectivity option on the phone. The device will also be backed by a 5,000mAh battery. While the video teaser confirms the phone to be offered in two colour options.

The Geekbench listing suggests that the Motorola smartphone will have Android 10 support and it has scored a single-core score of 152 and a multi-core score of 879.

Komila Singhhttp://www.gadgetbridge.com
Komila is one of the most spirited tech writers at Gadget Bridge. Always up for a new challenge, she is an expert at dissecting technology and getting to its core. She loves to tinker with new mobile phones, tablets and headphones.
Facebook
Twitter
WhatsApp
Linkedin
ReddIt
Email
Previous articleHow to change your country and language settings in Windows 10?
Next articleHow to share apps on Android using Nearby Share?