Nintendo's existing Switch gaming console is getting an upgrade.

Yesterday Nintendo announced a smaller and more affordable version of its Switch gaming console. Right after that, a report has surfaced online saying that the company is upgrading the original Nintendo Switch with a new processor and flash storage chips.

This has been revealed by listings in the Federal Communications Commission and it is worth mentioning that the new chips could mean that console will have faster load times and fewer number of slowdowns. It may also mean that the upgraded gaming console will come with a longer battery life and emit lesser heat than it does now.

We should mention that this is not the Nintendo Switch Pro, successor of the current model of Switch, that is being spoken about. This is more like an update to the existing model and it just comes with a few better internals. The company is being very tight-lipped about is as of now, but then, it has submitted a ‘Class II Permission Change’ to FCC so that it can introduce the changes in the existing model without having to get it recertified for sale in the United States.

The changes that can be seen in the FCC listing include an Nvidia Tegra processor that will come with CPU and graphics and ‘NAND memory’ that you will find inside an SSD.

It is also worth pointing out that this is not the first time when this will be happening as the video game industry has an entire history of quietly swapping components from gadgets and consoles. This also helps companies reduce the costs of their products because newly launched chips are usually easier to produce and smaller in size.

In Switch’s case, this will surely make a difference as currently, the gaming console comes with a four-year-old Tegra processor. But then, one can only surely tell once they have tried the new model. 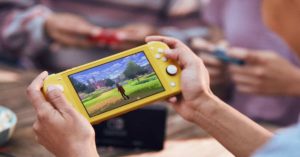 As we mentioned earlier, the company has just released a smaller and more affordable Nintendo Switch Lite. The device is priced at $199.99, and it does not come with detachable Joy-Con controllers. It is a completely hand-held device and users would not have the option of connecting it to a television to play games on a big screen. It will be made available for purchase starting September 20.

As of now, there is no word on the India price and availability of the device, but we will update you as soon as the company makes it official.