Nokia 8 Sirocco, Nokia 7 Plus and Nokia 6 (2018) launched in India: Price, specs and other details 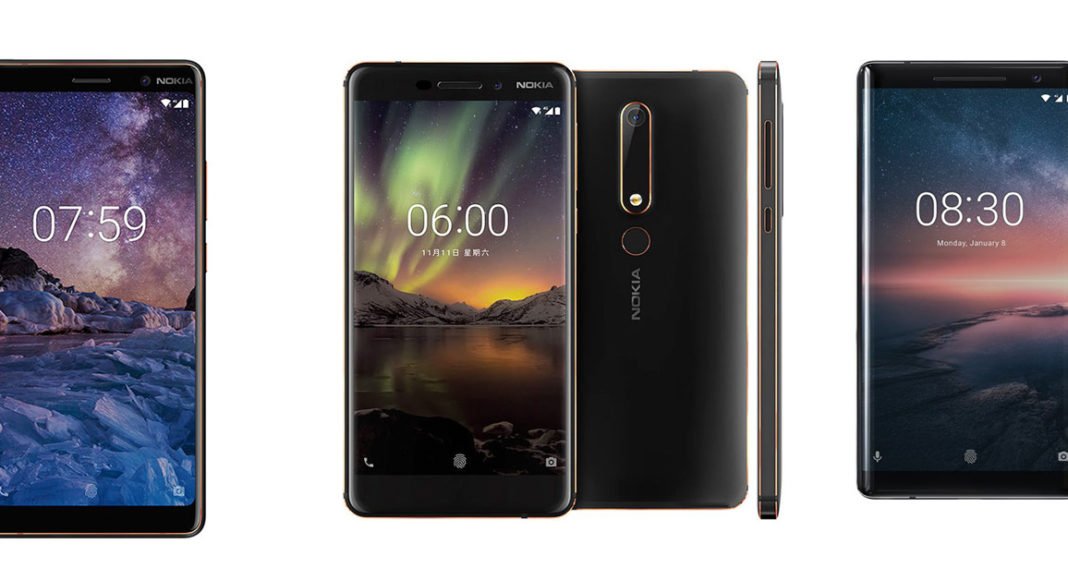 Nokia recently announced these phones as Mobile World Congress (MWC) and now they have brought all three to India. The new entourage of Nokia smartphones include the Nokia 8 Sirocco, Nokia 7 Plus and Nokia 6 (2018). These cement the commitment of early launch and arrival of Nokia’s smartphones in India. After just a month of their global launch the smartphones have arrived in our country and here is what they feature:

The Nokia 6 (2018) is available in two variants with a single SIM slot and a dual SIM Slot. With a 5.5-inch full HD (1080p) IPS display the Nokia 6 (2018) will also sport a Corning Gorilla Glass on it. Over that, the smartphone comes with 3 GB and 4GB DDR4 RAM options, built on the Qualcomm Snapdragon 630 SoC (Octa-core). As far as the operating system is concerned Nokia 6 (2018) runs the Android 8.0 Oreo OS. The rear gets 16 MP camera with dual-tone flash and Zeiss Optics.

While the front sports an 8 MP fixed focus cameras with f/2.0 aperture. Powered by a 3,000 mAh battery this smartphone can deliver up to (claimed) 16 hours of talk time or up to 507 hours of standby time. As for the storage the Nokia 6 (2018) comes with 32 GB and 64 GB memory options that can be expanded with the help of microSD card, up to 128 GB. Other features include, GPS, Wi-Fi, USB Type C connectivity and 3.5mm headphone jack.

Next is Nokia 7 Plus

Nokia 7 Plus features a big 6-inch FHD+ (1080×2160 pixels) IPS display with 18:9 aspect ratio. The screen does have Corning Gorilla glass over it, as much needed protection. Under the hood the Nokia 7 Plus runs a Qualcomm Snapdragon 660 chipset with 4 gigs of DDR4 RAM.  The chip also features 64GB on board storage, which can be expanded by up to 256 GB using a microSD card.

The Nokia 7 Plus has 12 + 13 MP wide-angle dual rear cameras with 2X optical zoom. It is matched with dual-tone LED flash. The front of the smartphone sports a 13 MP fixed focus cameras with f/2.0 aperture. Zeiss optics are available on both the rear and front cameras.

It is built on the Android 8 Oreo operating system, which should get regular security updates over the air. Other features include Wi-Fi, Bluetooth 5.0, NFC, USB Type C and 3.5mm audio jack. Battery life lies at up to 19 hours of continuous talk time via an in-built 3,800 mAh battery. It features aluminium body made from a single block of 6000 series metal. Colour options include black and white.

Nokia 7 plus pre-booking starts 20th April and starts selling on 30th April at a price of Rs 25,999. On Amazon and Nokia mobile shops.

The fastest of the lot, Nokia 8 Sirocco

Catering to the premium end of the smartphone users, Nokia also announced the Nokia 8 Sirocco. It features a large 5.5-inch QHD (1,440×2560 pixels) pOLED display. This also has a Corning Gorilla glass 5 over it (3D). This too has dual rear cameras 13 + 12 MP for superior pictures and will support bokeh effect. 2X optical zoom is available, too.

Inside, the Nokia 8 Sirocco users get a Qualcomm Snapdragon 835 SoC combined with 6 gigs of RAM. For storage, this smartphone features 128 GB memory. Connectivity options include 4G VoLTE, Wi-Fi 802.11 ac, GPS, NFC and BT v5. Fingerprint sensor, gyroscope and proximity sensor have also been thrown in the mix.

Rashi Guptahttp://www.gadgetbridge.com
Facebook
Twitter
WhatsApp
Linkedin
ReddIt
Email
Previous articleThis is what the new OnePlus smartphone will be called, plus everything we know about its specs
Next articleGet 102GB of data with this JIO pack for 51 days, IPL special