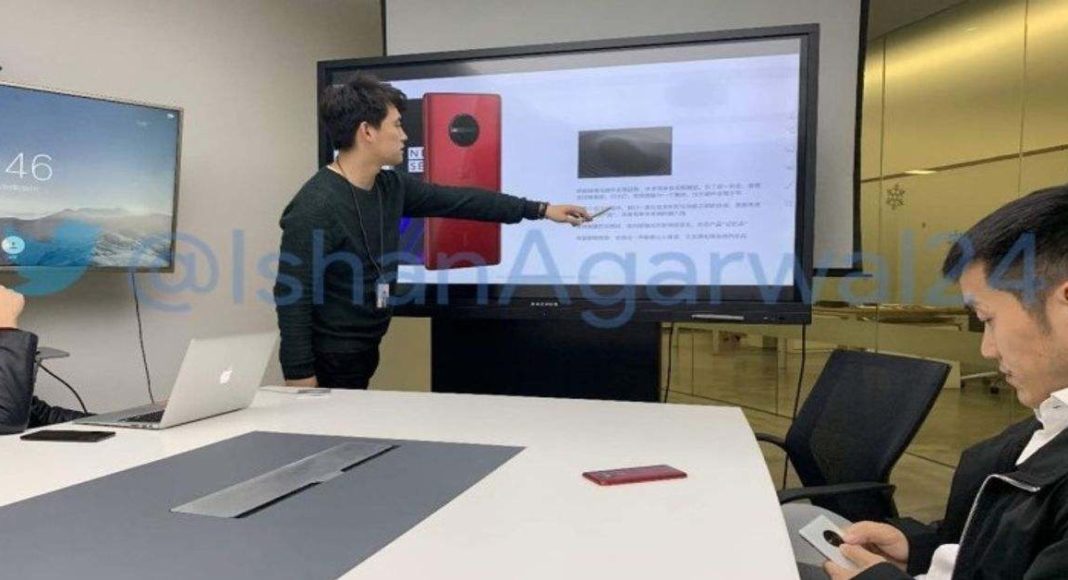 The upcoming year will be an important one for OnePlus. The Chinese smartphone brand will not only be seen launching its OnePlus 7 and OnePlus 7T smartphones, but it has also announced that it will be unveiling a 5G smartphone too. Although earlier speculations assumed that OnePlus 7 will come with 5G capabilities, the company clarified that it is planning a separate range for its 5G handsets as it wishes to continue selling its flagships at affordable prices. Reports about both its upcoming devices keep surfacing online.

And now, we may have got the first look at one of the upcoming OnePlus smartphones. A photograph from an internal company meeting that shows OnePlus CEO Pete Lau has been leaked. In the background, one can see a picture of a OnePlus device. But there’s no clarity on whether it’s OnePlus 7, OnePlus 7T or OnePlus’ 5G smartphone. However, if you take a look at the picture, you’ll see the upcoming smartphone has a very different design compared to the one we have seen till now on other OnePlus smartphones.

EXCLUSIVE! Here's your first look at an upcoming OnePlus Device I don't know much about. This image shows the device in prototype/designing stage and it is not final but this is probably how the device may end up looking. That's Pete (CEO of OP) in the img and the device itself. pic.twitter.com/Yau9EsgSDy

The device featured on the slide is Red in colour and it sports a huge circular camera module on its back panel. The smartphone lying on the desk seems to be of the same colour too. But if you see the picture closely, the man sitting towards the right has the same OnePlus smartphone with a huge camera module. The only difference is, that the smartphone he is holding is White in colour.

As we mentioned earlier, we don’t know which model of OnePlus this is, but if we believe the reports that claim that OnePlus’ 5G smartphone would be launched earlier than OnePlus 7, then in all probability the device in the image is OnePlus 5G mobile.

Recently, OnePlus had announced at Qualcomm’s annual summit that the first carrier to get the OnePlus 5G will be EE in the UK. The 5G-enabled smartphone by OnePlus is expected to cost $100 or $200 more than OnePlus 6T.

The company has also announced that its 5G-enabled smartphone will be powered by the Snapdragon 855 chipset paired with X50 modem. The same chipset will also be present in OnePlus 7, but with a different modem.

Avani Baggahttp://www.gadgetbridge.com
Avani has an immense love for reading, travelling and food, but not necessarily in the same order. Avani almost started pursuing law, but life had other (better) plans for her and she chose to be a writer instead (luckily!) She previously covered technology at Times Internet and wrote about smartphones, mobile apps and tech startups. When she’s not writing, you’ll be able to find her in book stores or catching up on her social life.
Facebook
Twitter
WhatsApp
Linkedin
ReddIt
Email
Previous articleAsus Zenfone Max Pro M2 review: Amongst the best budget smartphones
Next articleNew PUBG Vikendi map would be available on Android and iOS from 20th December: Learn how to download it